“Makeshift rude serendipity and lazy jerkwater hap reconnoiter to accrue a trencher’s worth of Blake,” is how one begins―and notes how, in annotating Bacon’s Essays Moral, Economical and Political (London, 1798), Blake [makes] and writes “[A drawing of] The devils arse [with a chain of excrement ending in] A King.” (And Robert Walser suggesting that “No one is entitled to behave toward me as though he knew me”—words Roberto Calasso hints being “tacitly posted at the beginning of everything Walser wrote.”) Still’d by the unraveling interruptory onslaughts, the beast jimmying at the door. Ought not I flee the concubinous city, trod a green-upswelling cakewalk in the bottomlands? I love that thing of Crèvecœur’s out of Letters from an American Farmer, where he talks of happiness plowing, the plow keeping to the furrow, the mind avoiding it:

After all, why should not a farmer be allowed to make use of his mental faculties as well as others; because a man works, is not he to think, and if he thinks usefully, why should not he in his leisure hours set down his thoughts? I have composed many a good sermon as I followed my plough. The eyes not being then engaged on any particular object, leaves the mind free for the introduction of many useful ideas. It is not in the noisy shop of a blacksmith or of a carpenter, that these studious moments can be enjoyed; it is as we silently till the ground, and muse along the odoriferous furrows of our low lands, uninterrupted either by stones or stumps; it is there that the salubrious effluvia of the earth animate our spirits and serve to inspire us; every other avocation of our farms are severe labours compared to this pleasing occupation: of all the tasks which mine imposes on me ploughing is the most agreeable, because I can think as I work; my mind is at leisure; my labour flows from instinct, as well as that of my horses; there is no kind of difference between us in our different shares of that operation; one of them keeps the furrow, the other avoids it; at the end of my field they turn either to the right or left as they are bid, whilst I thoughtlessly hold and guide the plough to which they are harnessed.

I both welcome the jump-furrow’dness of thinking, and work to hinder my own skippiness. (Apropos the “salubrious effluvia of the earth,” Edward Dahlberg, in “Our Vanishing Cooperative Colonies,” mentions—“among the nineteenth-century sex and vision shakers”—one Abner Kneeland, who “founded a contraceptive colony which he called Salubria.”) And Blake, who’d naught for the man who “closed himself up, till he sees all thing s thro’ narrow chinks of his cavern”: “Improvement makes strait roads, but the crooked roads without Improvement, are roads of Genius.” He’d, too, the monstrously good sense to know—he noted it on a pencil drawing of Nine Grotesque Heads—that “All Genius varies Thus Devils are various Angels are all alike,” with syntactical oomph presiding. (On a scrap, in a book: “May 1810 found the Word Golden.”) Hardly a trencher’s worth—one is flog’d by duty, made deficient by means. Blake: “I always thought that Jesus Christ was a Snubby or I should not have worshipd him if I had thought he had been one of those long spindle nosed rascals.” (No noun’d “snubby” in the OED pre-twentieth c.’s “snub-nosed revolver” and the adjectival nose-referring “snubby”—“What a snout he turns up to the morning air . . . pimpled, snubby, and snorty,” occurs in a popular magazine issued in 1828, a year after Blake’s death. . .) In, evidently, a tawdry (“snorty”) un-spieling way here. Dahlberg (The Flea of Sodom), a prophet to Beliar:

‘Spleen is a sickness, for after a man has loosed his bile, he must walk in the valley of Kidron for a year to be quiet again. Three things you should heed and do: return to the world, but as a timorous stranger with a precept in his mouth; second, be as nimble as a gazelle to run to a proverb, and as fierce as the lion to devour its meaning; third, know that forgetting is the depravity of sloth.’ 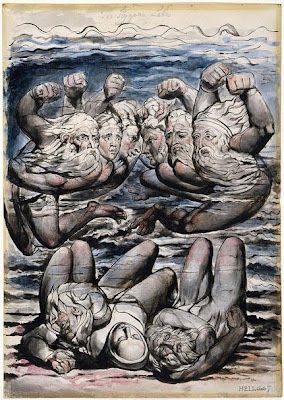