“A Rip in the Fabric”

Or the day succumbs to intermittent fuss and perusal, errancy the only means undiscard’d to redeem the unseen colossus (what pushes imperceptibly against one, that immeasurable surge that drives flower through the rock, that flenches meagre thinking itself of its fat, or the great miasmic undertow of sheer bookery . . .) Meaning, I thumb’d about “without purchase” for an abhorrence of hours (“It was in conformity with some such induction as the forgoing that I had to feel myself . . . in the midst of abnormal wintry rigours, take in at every pore a Southern impression,” as Henry James’d say) and finally “lit” on a paragraph out of Forrest Ganders’s “The Strange Case of Thomas Traherne,” in A Faithful Existence: Reading, Memory, and Transcendence (Shoemaker & Hoard, 2005):

In 1967, a passerby yanked a large, leather-bound book of neatly handwritten pages from a burning rubbish heap in England. In 1982, it was authoritatively attributed to seventeenth-century poet Thomas Traherne and identified as his last consuming project. Only recently has it been restored enough to handle. Unpublished still, smelling faintly of smoke and rot, part encyclopedia, part poetry, part visionary exposition, it lies in its own tray in the British Museum not just like a fossil, but specifically like Hallucigenia, one of the strangest, never-to-be-seen-again creatures discovered in the Burgess Shale. . . . Thomas Traherne’s full title for the work is:

COMMENTARIES of Heaven
wherein
The Mysteries of Felicitie
are opened
and
ALL THINGS
Discovered
to be
Objects of Happiness.
EVRY BEING
Created & Increated
being Alphabeticaly Represented
(as it will appear)
In the Light
of
GLORY
Wherin also
For the Satisfaction of Atheists, & the Consolation
of Christians, as well as the Assistance & Encouragement
of Divines: the Transcendent Verities
of the Holy Scriptures, and the
Highest Objects of the Christian Faith are
in a Clear Mirror Exhibited to the Ey of Reason:
in the Realitie and Glory

Beyond the simple felicities constru’d of a sudden in the midst of my tergiversations by such a fine laddering of material titular (unh-hunh), is Gander’s swoop to align Traherne with the phenomenologists, ably connecting “the Advent of Christ to being, in Traherne’s terms [“be / A Bliss to others like the Deitie”], to ‘the advent of being to consciousness,’ which is how Maurice Merleau-Ponty defines the concern of phenomenology.” Gander:

Merleau-Ponty . . . blasted rational thought for its limitations, arguing that “intellectualism and empiricism do not give us any account of the human experience of the world.” Like Traherne, he was obsessed with “attentiveness and wonder,” going so far as to claim that the best formulation of the phenomenological reduction [“Husserl’s premise that it is necessary to bracket off the world in order to study its effects.”] was articulated by Husserl’s assistant “when he spoke of ‘wonder’ in the face of the world.” When Merleau-Ponty makes his own case for a primary consciousness, he imagines a state akin to Traherne’s “original simplicity,” a pre-reflective awareness that reveals the “coexistence “ or “coincidence” of an embodied subject with the world. It is the world, more specifically the body in the world, that structures perception, Merleau-Ponty insists, and he quotes Cézanne’s boast that the landscape though itself inside him and he was its consciousness. Traherne makes a declaration just as bold and intuitive when he writes, “The world was more in me that I in it.”

Visceral thrill to think that (see “flenches meagre thinking itself of its fat”). As William Fuller says—see “Reply to Experience,” in Three Replies (Barque, 2008)—“Facts team up.” And: “Streets twisted themselves into a cocked, teeming ear.” And:

Hopes, and the conditions on which hopes are based, cannot be gathered under anything but loose headings, and so are of almost no benefit. But in that small excess of ‘almost’ clouds appear. Recognizing that the stacks of materials stuffed into the horizon withdraw themselves as soon as they are reckoned with, or even at the mere suggestion—overt, implied, rumored, or hidden—that a reckoning might occur—late at night, as images snake across the rug and words leap out of books to join in a half-dance, half-declaration, while the enemy peers in at the window, the moonlight nearly decapitating him, and the yellow lines drawn over his face frame the fears you’ve echoed and your echo ring—at that point you wonder if the withdrawal may have already occurred, whether it may have happened primordially, irrevocably. Or perhaps there may never have been anything present that could have withdrawn itself; hence the tragic mode is clarified. . . .

(Recalling Ashbery’s Three Poems in its utterly sure-handed roundaboutedness, its discursive joining of worlds.) Fuller’s other “replies”: “Reply to Traherne,” “Reply to Parson Platt.” The latter being John Platt, seventeenth-century Puritan minister and landlord, notably denounced by Digger Gerrard Winstanley, he who call’d the earth a “common treasury” and rally’d for a world of direct experience, an “experimental knowledge of Christ” (“What I hear another man speak is nothing to me until I find the same experience in myself. The testimony of others is known to be true by the testimony of the same experience within myself.”) Out of “Reply to Parson Platt”: “Hands in pockets, old school universals kick rocks at the flaming forehead of song.” Out of “Reply to Traherne”: “These are the rules, revised in glare and fluttering in the hand of necessity. We indicate below the scope of their application. Be well human thought / I hear you working . . .” And:

(Recede unsolemnly with endless quoting: “curious rhyming snails / gild hippocrene’s crank / strictly construed . . .”) One notes, too late, how the “replies” reply, too, to pieces—one call’d “Parson Platt,” one call’d “Traherne”—in Fuller’s own Watchword (Flood Editions, 2006). “Traherne”: “you were / nothing before you came into // being, you become nothing / when you have ceased to be // a few evenings later only / absurd things survive . . .” (Continue with the recessional . . .) 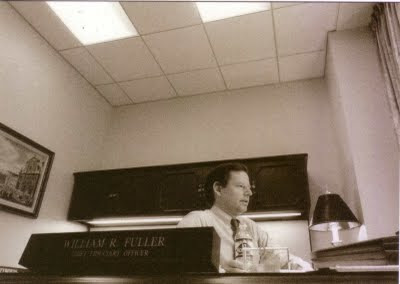