CLX
Aelianus, in On the Traits
of Animals, trumps the nay-
sayers of “verity poetickal” by
maintaining that if Anacreon’s got
keroesses (“antler’d”) modifying “doe,” none
ought mump the anomaly or
insist eroesses (“lovely”) the better
fit. I, John Latta, differ.
The poets I know interbreed
cow with cruller, dogma with
Dostoevsky. All about the sublime
quiddity of the referent un-
doable, or the unmull’d hazard
of the quoit thrown point-
blank at the abolitionist they
be, and only a few
know the animal kingdom’s precarious
fit in the sudden un-
plaiting of history. Anacreon wrote:
“I am mad and I
am not mad!” and “Eros
bang’d me up, and hammer’d
me with a smithy’s tool,
plunged me in cold water!”
Species of one he is,
taxon of whatever fuckin’ binomial
comes down the pike—biblical
giant, tawny moor, words inexact
click into the musical slot.

In Eliot Weinberger’s terrific essay “Susan Howe’s My Emily Dickinson” (out of Oranges & Peanuts for Sale)—a piece that first appear’d in the New Directions 2007 reprint of Howe’s book and, as such, likely got overlook’d by a number of “us” who’d read the original 1985 North Atlantic Books edition—I find mention of Jean Cocteau and what he call’d “Indirect Criticism,” what Weinberger, rounding up an extremely small herd of horses similar to Howe’s “avant-gardist criticism” in the Dickinson book—the bets put up for “Lawrence’s Studies, Olson’s Ishmael, Williams’ American Grain, Duncan’s still-uncollected The H. D. Book, Simone Weil’s The Iliad, or the Poem of Force, H. D.’s Tribute to Freud, Zukofsky’s Bottom: On Shakespeare—calls “a lost cousin of some of Howe’s work in prose.” Being a sleuth-cormorantickal, I dive (rather shallowly, it turns out) into the stacks and find—not in the “first New Directions anthology” (1936) that Weinberger points to (unlocated, presumably missing)—a 1964 issue of the Weiss’s Quarterly Review of Literature devoted to Cocteau’s “An Essay of Indirect Criticism,” translated by Arno Karlen.

(Two things occur to me: Cocteau’d just died in 1963—is the essay a reprinting of the New Directions item (no sign of it, if so). Too, QRL is headquarter’d at Bard in 1964: what if it’d remain’d there, and forsook the tony Princeton “air” of its later years? One notes that the Weiss’s print’d several poems by Robert Duncan in the “era”—though the effect of putting Duncan next to Horace Gregory’s version of Ovid or a Louis Simpson piece (“The Prince of Monaco / Was sick of English ladies”) is predominantly one of making the Duncan resemble its surroundings (“The lady in the shade of the boughs / held a dove in her two hands, / let it fly up from the bowl she made / as if a word had left her lips.”))

(What—still avoiding the Cocteau essay—Weinberger does in the Dickinson essay is a brilliant limning of Dickinson’s reception by (largely) the New American Poets (and its lineage). So, one learns that “D. H. Lawrence doesn’t mention her in Studies in Classic American Literature (1923). Ezra Pound found room for John Geeenleaf Whittier and James Whitcomb Riley in his anthology From Confucius to Cummings (1958), but did not include her.” And: “Olson refers to her only once, in an early draft of Call Me Ishmael (1947): ‘Dickinson loved Christ but jilted Him and married Death. Her stretch and yawn for the grave strained her nature, poisoned it.’” And: “Robert Creeley and Louis Zukofsky, though fellow masters of compression, did not write about her. (Zukofsky wanted three poems for his 1948 anthology, A Test of Poetry, but thought the permissions fee too high: $25.) Kenneth Rexroth declared that Dickinson ‘is the equal of any woman poet of the century except Christina Rossetti and the Brontë sisters.’” It’s a roundly damning catalogue—only Robert Duncan (in a 1960 letter to Denise Levertov) seems to see Dickinson’s greatness unqualifiedly:

Have you seen the new edition of Emily Dickinson’s poems, restoring her punctuation? So that we see she was nearer akin than we might have suspected. The dashes (are spaces) articulate the line. And what a lovely measure, what an immediate thing comes out!

Levertov answers that “actually those dashes bother me—it seems to give a monotony of tone” and admits that “ever and again one feels (or I do)—‘Jesus, what a bitchy little spinster.’” Weinberger’s comb’d the archives (there are innumerable other stray responses). One wonders if the reception of Dickinson by the Hall-Simpson-Pack pack would register as equally miserable. One wonders how many of the (male) canon-worthy hopefuls of Howe’s own generation’ve written about Dickinson.)

Cocteau’s essay is divided into two parts, “The Secular Mystery” (1928) and—spinning off De Quincey’s “Murder Considered as One of the Fine Arts”—“The Fine Arts Considered as a Murder” (c. 1932). He proceeds by aphorism, anecdote, rhetorical oratory, impression, never particularly defining what is meant by “indirect criticism.” The concern at hand: the paintings (and writings) of Giorgio di Chirico, and (somewhat less) of Picasso. Early:

Chirico’s paternal family: mad uncle and aunt. The uncle used to push a chair in front of him to keep from falling over a precipice. Aunt Olympia undid her hair, kneeled before a couch and rolled her head on it till she was bald. Such antecedents contribute to clearing all picturesque character from Chirico’s work.

A man who falls from a window is a man who dwindles and brutally stops dwindling, in a mannikin pose. A man who recedes in the distance is a man who falls softly and, instead of being crushed, evaporates like a mist. All of Chirico’s perspectives are falls.

An automobile accident, a train wreck, are the masterpieces of the unforeseen. One would like to see in slow motion the speed and immobility twisting the iron with a modiste’s fingers.

Admittedly, I am less attract’d by the specifics of Cocteau’s argument for di Chirico that I am by the method, the style, its source and its descendents. (In some sense, Cocteau is denying method, denying the possibility of criticism. He writes: “The new criticism will demand the use of the heart; which is to say that it will become a less facile business and end by disappearing.” And, syllogistically (and strangely): “The aesthetics of God escapes judgment. . . . Man is in the image of God. When an artist whom I admire perplexes me, it is a matter of performing an act of faith.”) One source possibility: Nietzsche. Cocteau points to one aphorism in Beyond Good and Evil wherein, he says, “Nietzsche smells out the jackpot”: the aphorism (254) apparently argues for a small (and secret) “elite of taste”—a “France of taste”—

He who belongs to it keeps himself well concealed—they may be a small number in whom it lives and is embodied, besides perhaps being men who do not stand upon the strongest legs, in part fatalists, hypochondriacs, invalids, in part persons over-indulged, over-refined, such as have the AMBITION to conceal themselves. They have all something in common: they keep their ears closed in presence of the delirious folly and noisy spouting of the democratic BOURGEOIS.

Refinement, secrecy, difficulty, indulgence, heart, purity: there’s something terribly precious here (Cocteau remarks at one point: “Nietzsche, Baudelaire, are preoccupied with hygiene”) and it wars with a counter-pulse of inexactitude and audacity, mess (“A great artist is inhuman, vegetal, bestial. If he tries to speak, his attempts throw us into confusion.”) Cocteau is arguing—like Blake’s “I am hid”—for a glance-hermeticism, an art that conceals itself (against the rabble) and whose greatness is only slowly reveal’d (in opposition, one suspects, to the predictable stout vagary of this year’s model). Cocteau: “The picture, inoffensive at first glance, worked on the optic center by the agency of a mirrored armoire whose complicity turned certain forms head over heels and stripped them of all shame.” Or consider how apt to 2000-2007 the following is: “Audacity takes shape in the wake of the audacious. A man is thought audacious if he prolongs an old audacity. Everyone thought himself superior between 1920 and 1927 because obscure art was entering its rococo period.”

Is the Pound of A B C of Reading (1934), its assured exhorting, coming out of Cocteau? Pound: in a 1937 issue of The Criterion (“D’Artagnan Twenty Years After”), complaining (rather cryptically) about the lack of anything new, refer’d to the first part of “The Essay of Indirect Criticism,” presumably he read it in French, perhaps between 1928 and 1934: “Cocteau in the Mystère Laïc years later gave us the silk-fine web of indirect criticism. Nothing is new and all good is renewal.” Isn’t the tonal jump-cutting similar to Cocteau’s in something like:

Wordsworth got rid of a lot of trimmings, but there are vast stretches of deadness in his writing. Artists are the antennae of the race. Wordsworth vibrates to a very limited range of stimuli, and he was not conscious of the full problem of writing.

The problem of sentence structure was undeniably discussed during several centuries.

‘A carpenter can put boards together, but a good carpenter would know seasoned wood from green.’

Swinging between the obvious and the oratorical, the bluntly assertive and the impressionistic. (Is Frank O’Hara’s art criticism in the lineage of Cocteau’s indirect criticism?)

Poetry is exactitude, number. But people find inexactitude poetic, romantic. The crowd adores inexactitude that has the air of truth. I wonder if scandal sheets relate inexact facts because they learn them fourth hand or if they warp the truth out of a profound knowledge of public taste . . .

Brevity, precision, promptitude, contour, these are the reasons why we are taken for hermetic writers.

People demand to have poetry explained to them. They aren’t aware that poetry is a closed world where one receives very few, where it even chances that one receives not at all.

A permitted thing cannot be pure.

True realism consists of showing surprising things which habit hides beneath a dust-cover and prevents us from seeing. Our name no longer has human form. None of us hears it. Sometimes a postman who wakes us by shouting it in a hotel corridor, a cashier who asks us for it, students who make fun of it in class, tear off the wraps and brusquely expose this name, detached from us, solitary and singular as an unknown object. A Louis XVI chair chained on the sidewalk outside an antique shop, like a dog, strikes us. Some dog! It’s a Louis XVI chair. In a salon you wouldn’t have seen it.

A DIFFICULT OBJECT TO PICK UP

Title of a cotillion figure which I found in an old book on the dress ball. Perfect definition of a masterpiece. You see the gilt chairs, the bare-shouldered muses, decked with diamonds, mad with laughter, the poor critic in the middle on all fours.

It is, in the end, to discover a method enabling one to pick up the difficult object to pick up that I am writing this book.

The poet stops his ears with wax and ties himself to the mast; he dreads the sirens that ravish his epoch. The strangest part is that the sirens sing a song they owe to him, perfected by their sorcery to seduce the crew.

When I was little I thought foreigners spoke no language at all, only pretending among themselves to speak one. That’s what the public thinks when faced with us. 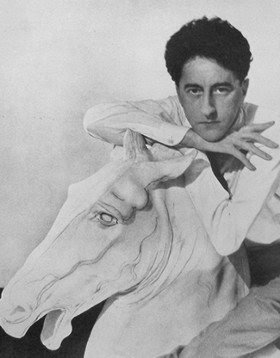