CLV
Big gunny sack of ice-
cold pop under the floor-
boards, in a kind of
hammock under the wagon, jouncing
up and down a little
with the horse’s gait. X
doing finger jive, inexplicable dumb-
show motions with one hand,
the other clamp’d tight around
the transistor he’d drug off
Okinawa in a blue tick
hound’s fury at being dishonorably
discharg’d for selling a few
poppers. Ah, fictive propensity, how
slyly it obtrudes, how meanly,
without aim or tenor, it
interposes to populate the sketchy
territory the I commands. Nigh
resourcelessly, like Blake’s traveler through
Eternity, it drags behind itself
“its / Own Vortex”—“a globe
itself infolding like a sun.”
To make ponder one need
only ensconce oneself with intent
(attending the boisterous etymological racket
therein of abscond, of stealing
off with, of hiding oneself
amongst, condiment and connerie, everything
that is food for light).

Continuing to read the essays collect’d in Eliot Weinberger’s new Oranges & Peanuts for Sale (New Directions, 2009). The book contains works—Weinberger says—“in one way or another, commissioned: oranges and peanuts for sale” (though the title itself refers to the extraordinary 1934 Anton Bruehl photograph of a Mexico City street vendor, a photograph that triggers a short Weinberger collage essay of peanut (“The astronaut Alan B. Shepherd took a peanut to the moon.”) and orange (“The color is named after the fruit; the fruit is not named after the color.”) intermittencies (whilst I—confronting the Bruehl photograph go transfix’d by the man’s asymmetry and the way the umbrella pole accentuates it so perfectly). I note that Weinberger calls the 2007 collection (An Elemental Thing) a “serial essay” (whilst noting that Part V in the current book—a single piece titled “A Journey on the Yangtze River”—continues it). Which’s got me stubbornly—which is to say, inconclusively—weighing the adage of Walter Benjamin that Weinberger flings back at Sontag (who liked to cite it): “All great works of literature found a genre or dissolve one.” (Weinberger’s own self-appoint’d task: dissolving the essay into poetry; making of the essay collection a thing vastly larger than its parts.) 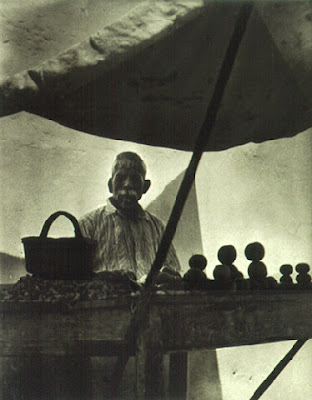 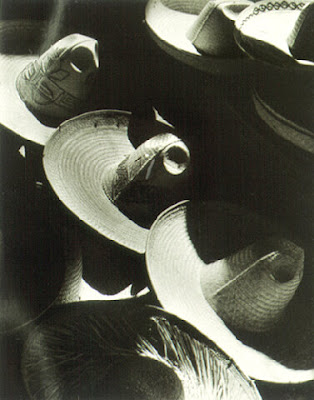 Reading “Inventing China” (in a somewhat truncated form, it served originally to introduce the 2003 Weinberger-edited New Directions Anthology of Classical Chinese Poetry) I am struck by the argument (the way one’s dumbly struck by the obvious) that Pound’s Imagist aesthetic (largely derived out of classical Chinese poetry) “has dominated American poetry for the last ninety years,” Chinese being:

. . . perhaps the greatest example of direct presentation without generalizing comment, of “no ideas except in things.” Poets as dissimilar as Charles Reznikoff and Stanley Kunitz, . . . each publicly cited the Sung Dynasty critic, Wei T’ai (from the epigraph to A. C. Graham’s Poems of the Late T’ang): “Poetry presents the thing in order to convey the feeling. It should be precise about the thing and reticent about the feeling.”

(Reticent, too, regarding ideas, arguments, logical claims, excessive rhetoric, lyrical flourish. Isn’t the whole “show, don’t tell” doctrine traceable to classic Chinese poetry’s invention of American verse? Isn’t the still-considerable prejudice for “plain-speech,” the stripped-down, the unclutter’d, and against the manner’d, the exfoliate, the over-exposed, too, a legacy of Pound’s China?)

In the course of Weinberger’s detailing the trajectory of twentieth-century translations of Chinese into English, he argues rather convincingly for the merits (overlook’d) of Pound’s complete translation of the Odes (Shih Ching: The Classic Anthology Defined by Confucius), work’d up in St. Elizabeths (using Swedish Sinologist Bernard Karlgren’s 1950 translation, The Book of Odes, that includ’d, along with the Chinese texts, “reconstructions of the archaic pronunciations for the rhyme-words,” and prose versions), and publish’d in 1954. Weinberger:

Pound attempted to incorporate into the poems, along with the literal meanings, the etymological, pictographic elements of certain characters. Also ideogrammically, he inserted the poem into the simultaneity of all ages by frequently giving them wacky, cultural and historically specific titles like “Polonius on Ostentation,” “Evviva la Torre di Pisa!,” “Strip-Tease?,” and “Ole Man River.”

One might profitably compare the versions (Weinberger puts together a page consisting of Pound, James Legge (who publish’d an 1876 bilingual version of the Odes call’d, rather confusingly, The She King), Karlgren and Arthur Waley (of the 1937 Book of Songs, “the first Sinologist capable of writing poetry”) translations of one song. Look at Pound’s condensery against Karlgren’s prose:

Pine boat a-shift
on drift of tide,
for flame in the ear, sleep riven,
driven; rift of the heart in dark
no wine will clear,
nor have I will to playe.

Drifting is that cypress-wood boat, drifitng is its floating [So I am drifting helplessly along, without means of steering my way]; I am [bright =] wide awake and do not sleep, as if I had a painful grief; but it is not that I have no wine, to amuse and divert myself.

Weinberger, with an uncanny ability to re-assemble whatever textual components Pound (or anybody) may’ve originally used, notes how Pound “takes the component of the character keng (bright / awake), ‘ear’ and ‘fire,’ sees in Matthew’s dictionary [the 1931 Mathews’ Chinese-English Dictionary, a notorious and much-malign’d book, a “modern usage” dictionary, unsuitable for the task—as Weinberger quotes Achilles Fang: “Would you use Webster’s Collegiate Dictionary to translate Chaucer?”] that keng also means ‘disquieted,’ and produces ‘flame in the ear, sleep riven.’” The apparent sonic qualities of the version due apparently to Pound’s growing conviction that the “verbal sonorities” of Chinese were “hardly inferior to the Greek.” Weinberger:

The entire book was conceived as a songbook, with Pound’s oceanic eclecticism finding models from the Troubadours to the Elizabethans, hillbilly folk songs to some syncopated boogie-woogie. Rarely discussed by Pound scholars (other than Richard Sieburth, who thinks it Pound’s greatest translation) and largely dismissed by Sinologists, The Confucian Odes remains—alongside Samuel Beckett’s anthology of Mexican poetry and Louis Zukofsky’s Catullus—on of the masterpieces of idiosyncratic translation: a radical invocation of the spirits, if not always an accurate transmission of the words. 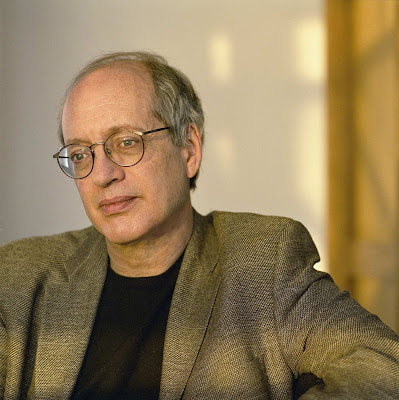