Collage and Its Malcontents

CLIV
Nijinsky, who scratch’d
out a record
of the incipient
and throttling descent

myself! Meddlesome, bum-
hearty, and fickle,
I foozle attending,
I stickle, putsch-

savvy and heedless,
unscript’d and wild.
For any parchment
(caught up by

any cannonade of
gel’d verbosity scrawl’d
foetid and languishing—
for a reader!),

I read stains and dribbles,
smears and leaks.
I cock one
weather eye up

unconstrain’d by sense,
grog-stupor’d by
clarity and its
malcontents. I slog

and tingle, I
pirouette, plié, un-
knot and rearrange
the incalculable naught.

A minor note in Sontag’s journals—“Early example of collage / John Frederick Peto (1854-1907): called Oridinary Objects in the Artist’s Creative Mind (oil on canvas).”
•
And: “Read Miss Bosanquet’s Memoirs—James’ typist in later years. Leon Edel says the break between the ‘middle’ + ‘late’ (gaseous) style comes just at the point when James stopped dictating to a secretary who took shorthand + started dictating to Miss B. who typed as he spoke. A Remington was the only typewriter whose rhythms he could bear, + on his death bed—at this last moments—he called for his Remington. And she typed for him. James died to the tune of his typewriter.”
•
An assemblagist’s contract: what reading is. (Sontag gearing up for “Against Interpretation” says of it (interpretation): “Always the presumption of meaning. One criterion of interpretation . . . is that it doesn’t allow enough meaning (sense) to the text.”)
•
John Berger (in From A to X: A Story in Letters) reports a dream: “The universe was open like a book. Me looking at it. The top right-hand corner of the right hand page was folded inwards to mark the place. And on that small triangle of folded paper was written the secret of materiality—which was elegant and faultless as a fractal.” And adds: “I was so reassured by this, so happy, that I didn’t think of writing it down.” Faultless, and endlessly repeating.
•
My reading habits. Dog-earing. Skippiness. Inattention and loss. Hours spent thumbing and re-thumbing a book, certain something I vaguely recall is found therein.
•
Sontag enumerating: “1. Nothing is uninterpreted. 2. To interpret is to determine, restrict; or to exfoliate, read meaning into. 3. Interpretation is the medium by which we justify context. 4. To interpret a word is different from defining it; it means to specify a range of contexts (not equivalents).”
•
The dismissive capture of dog-earing, like writing, making notes. Allowing one to continue, empty-head’d, or “relatively” so.
•
Sontag’s report that “Goethe declared that only insufficient knowledge is creative.” (See Ammons’s remark that a writer ought “keep himself a little stupid.”)
•
Is there there (in the need for insufficiency) source of my discomfiture with what Eliot Weinberger says about George Oppen (in “Oppen Then,” in Peanuts & Oranges for Sale), working off the initial lines of Of Being Numerous (“There are things / We live among ‘and to see them / Is to know ourselves’”), how Oppen insisted that “the function of poetry was a test of truth” (“he may have been the last writer in the West to use the word ‘truth’ without irony”): “The poet’s task was to restore meaning to words—particularly in a time of official lies—and this was only possible through direct experience of the words themselves. Speaking of H.D., he once asked, in amazement, “How can you write a word like ‘angel’?” . . . He insisted on writing only about what he himself had seen, and the act of seeing . . . Uniquely among American poets, there are almost no mythological references and no myth-making, no exotica, no personae, only one or two passing historical references, and almost no similes in his work: in Oppen’s world, things are not ‘like,’ they are there, right in front of you, and there with an exclamation point. His metaphor for ‘seeing’ in a poem is apocalyptic: the man in the ditch, staring at the spinning wheels of his overturned car—as he himself, in his youth, had been the driver in a fatal crash.”
•
As if Oppen believed one capable of a-rhetorical (a-contextual) speech, with none of the “trappings” of suasion.
•
Sontag’s militant turn (simply a cynical recognition of the mirey of the contextual, the means to push one’s interpretive : “The time for writing to entertain other people is over. I don’t write to entertain others, or myself. This book is an instrument, a tool—and it must be hard + shaped like a tool, long, thick, and blunt.”
•
Berger: “The Inuit poet, Panegoosho, dropped in and started to talk about people he knew as a child. ‘They did not even try to be beautiful, only true, but beauty was there, it was a custom.’”
•
The way collage itself hoists itself up by means of rhetoric, assumes its own unaccountable direction, invariably points out a way “in” for the interpreter, against its presumptuous indirection, its constellating vibrance.
•
Sontag, quoting Melville: “Cursed be that mortal inter-indebtedness . . . I would be free as air; and I’m down in the whole world’s books.”
•
Sontag: “Shelley has Demogorgon in Prometheus Unbound say, ‘The deep truth is imageless.’ Poetry is itself a ‘dome of many-coloured glass’ which ‘Stains the white radiance of Eternity.’”
•
“Returning exiles rarely take into account their own aging: if a place seems less marvelous than it was when they were young, obviously it is because things are much worse and not that they themselves are no longer full of wonder.” Weinberger, in “Where Was New York?” (Peanuts & Oranges for Sale). Self-administer’d trompe l’oeilism.
•
Berger’s prison house of language: “To tell the truth? Words tortured until they give themselves up to their polar opposites; Democracy, Freedom, Progress, when returned to their cells, are incoherent. And then there are other words, Imperialism, Capitalism, Slavery, which are refused entry, are turned back at every frontier point and their confiscated papers given to impostors such as Globalization, Free Market, Natural Order.
Solution: the evening language of the poor. With this some truths can be told and held.” A turn to limit’d means, speech, the local, the village share. 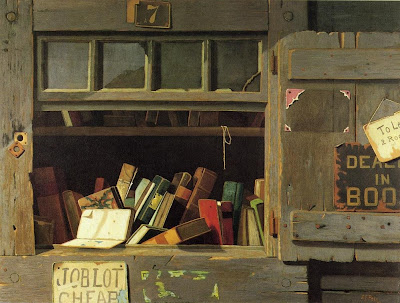 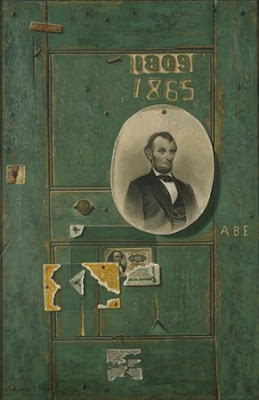 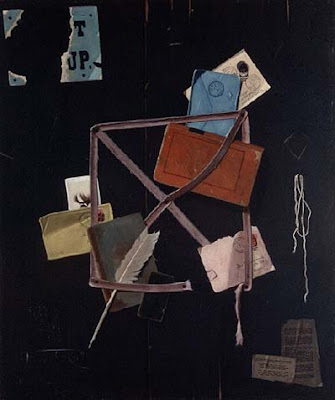 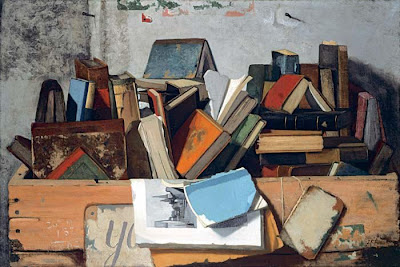