CLIX
Up out of
the suppurating vocabulary
and monosyllabic wad-

rancor of dunghills
literary and down
into the dulcet

Charles Mingus, bolster-
big and tired
of a hammer’d

suburban drunk’s haranguing
commands, thrusts it
out like Sisyphus,

the bull stanchion
of the bass:
“You play it.”

And isn’t writing’s
work a little
like that? No.

Cur and ass,
ass and cur,
cure that sass

with vinegar, is
how one rhyme
goeth. And I—

and mutters misconstruals
without ceasing (“I
is disgustipated”)—I

of continual days
that drips down
out of (register

change) the great
IV bag of
the incurable heavens—

I is no
lyric comedy, no
“I yam what

minded impertinence, is
a unit of
utterance, improbable, fit.

Ah, the impetuous dispersals (unfocus’d) of the weekend—like tossing seed into the wind (good for the consequent prosperity of the species). (Refreshment arrives with its inamorata of high rhetoric—these cheesy lung-emptying outbursts about nothing in particular.) I finish’d La Sontag’s journal, skimpy though it be. Sontag deigns insert the Sontag brand of elitism even into the sex acts of others: “American idea of sex as hard breathing (passion). They’re indicating, not doing. They think less breathing = less passion, coldness.” (I love the nearby idea, however, of a writing that “indicates” writing in lieu of writing, a faked writing. The motions of a late style. “(Pages of illustrations.)”) I read several essays in Eliot Weinberger’s new Oranges & Peanuts for Sale (New Directions, 2009). In a piece originally written to review the recent reprinting of A. C. Graham’s Poems of the Late T’ang (NYRB, 2008), Weinberger talks about the poet Li Ho (791-817), “who did not fit any of the traditional categories assumed for Chinese poets”:

He was neither a Confucian civil servant restoring meaning to language nor a Taoist adept out in nature, neither a libertine nor a Buddhist monk. He was a Crazy Poet—the Chinese refer to him as the “ghostly genius”—who rode his donkey all day and wrote scattered lines that he tossed into a bag. At night, he emptied out the bag and put the lines together as poems, which he threw into another bag and forgot. His mother complained that “this boy will spit his heart out,” which he did at age twenty-six.

(Graham himself notes how seeing the “peculiar qualities” of Li Ho’s poetry—“recently rediscovered after long neglect”—required “the breakdown of traditional literary standards in the nineteenth and twentieth centuries.”) The story of the bag of lines recalls the Wittgenstein of Zettel (the book of fragments wherein one finds, amongst others: “Do not forget that a poem, although it is composed in the language of information, is not used in the language-game of giving information.”) and the Marcel Duchamp of “The Bride Stripped Bare by Her Bachelors, Even (The Green Box)”—full of Duchamp’s notes and scraps, verbal compliment if not “explication” of what it’s made to accompany: “The Bride Stripped Bare by Her Bachelors, Even (The Large Glass).” Or—Jonathan Edwards. The ineffable Jonathan Edwards of Susan Howe’s Souls of the Labadie Tract:

As an idea occurred to him, he pinned a small piece of paper on his clothing, fixing in his mind an association between the location of the paper and the particular insight. On his return home, he unpinned each slip and wrote down its associated thought according to location.

How I love that! Here’s a Li Ho poem out of the Graham anthology:

The moon has set above High Dike,
From their perch on the parapet crows fly up.
Fine dew damps the rounded crimson
And the cold scene clears of last night’s drunkenness.
Woman and herdboy have crossed the River of Heaven,
Mist in the willows fills the corners of the wall.
The favoured guest snaps off his tassel for a pledge:
Two eyebrows, smudges of green, knit.

Spring curtains of flimsy cicada-wing gauze,
Spread cushions braided with gold, and a flower which hides away.
In front of the curtain light willow fluff hovers, crane’s down—
No, for spring’s passion there is no simile.

Weinberger notes in the essay how “Women in the courts of the T’ang Dynasty (618-907) painted their eyebrows green; the standard of beauty was brows as delicately curved as the antennae of moths.” Too: “Foreheads were powdered yellow with massicot, a lead oxide, for yellow was the color of vitality.” And, again, talking about horse-riding women (Weinberger’s reviewing, too, an art exhibition call’d “China: At the Court of the Emperors” at the Palazzo Strozzi in Florence—“one Renaissance paying tribute to another”—the exhibit containing ceramic horses, some with riders), he notes: “(It was later, during the Sung Dynasty, that foot-binding was introduced and languorous inactivity become the feminine erotic idea; the T’ang aristocratic male apparently preferred equestrian and acrobatic women.)” 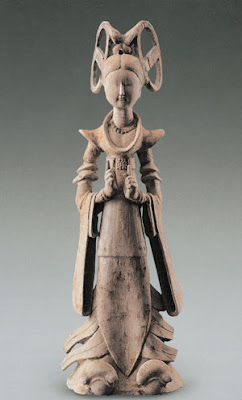 Dancer, T’ang dynasty
(Weinberger: “One of the most beautiful objects in the show is simply identified as a ‘dancer,’ but seems to be some sort of other-worldly being, thin as a mantis, wearing a strange dress that evokes both beetles and old science-fiction movies. A foot tall, her fists are clenched in front of her, with both index fingers mysteriously pointing upward. Her hair has been shaped into two enormous wheels, which the catalog unhelpfully states was ‘poetically described’—it does not say by whom—as ‘double-ring-shaped, gazing at the immortals.’”)