CLXIII
Out of the void
a thin blue aerogramme
writ off the material
spoils of one muggy
day in Paris, 1973.
‘I wol persevere, I
nam nat precius.’ Chaucer,
mouth buggy with gum.
What to do with
lunar measures elapsed, remorseless
and wan: such is
the nature of my
query. That warring post-
modifier of current unprincipled
Time’s stark’st unforeseeable moves.
Lug of rucksack through
the quartier asiatique, Porte
d’Italie. Lacquer’d duck. Verve
of a tyro gossip-
monger in the first
deux chevaux that stop’d.
The tiny historical slot
of longhair camaraderie gone
foul. Milosz to Alexander
Wat, a man who
scorn’d the unobstruct’d rude
foolishness of literature seen
through the bars of
prison: ‘History is for
grown-ups.’ Form makes
nothing stately without lying.
The story of X,
the Iranian painter who,
harass’d constantly, he claim’d,
by Savak agents, hung
himself off the sky-
light in the chambre
de bonne he inhabit’d,
rue Oberkampf. He left
a single black canvas
with one word scratch’d
into it: engagée or
enragée, scrawl’d, asinine, bereft.

Tom Clark’s Vanitas-post’d lines recently under the title “Postconceptualism” (who amongst “us” isn’t heaving a “ginormous” sigh of relief at that news?), the lines—“I like breathing better than wireless ideation / But strange is the human meat / When it is ripped out of the atmosphere / And arrows are shot into it”—coincided with my late perusal of Gilbert Sorrentino’s Lunar Follies (Coffee House, 2005), a funny and mordant collection of mock reviews, each apparently named for a geographical “jut” of the moon. Under the plus ça change, plus c’est la même chose (or plus there’s a possibility to rake in some serious change) rubric, here’s “Carpathians”:

Most serious gallery-goers of the seventies pretend to remember Moss Kuth, one of the early practitioners—some would the avatar—of Exoconceptualism. This, his first exhibition in almost fifteen years, gathers well-known, to some revered, devices, and what the artist calls “plannings,” those strangely occulted, iconoclastic conglomerates that heralded the end of the stasis imposed upon the art of the fifties and sixties by market-corrupted confections of pop art, op art, numero art, subway art, and the moribund rigidities of a humorless politico-expressionism. There are included, too, some recent, surprisingly sunny (though no less pointed) constructions. Moss and his wife, Magda, have been living quietly in their small farmhouse in Provence, venturing only as far as Paris once or twice a year to stock up on books, visit the galleries, and spend a convivial evening or two with such old ghosts as Matisse, Picasso, and Gris, “quarreling” as Magda smilingly puts it, “the night away.” In the large and breathtaking photo by Dan Ray that dominates the gallery’s south wall, Moss, Magda, and their Irish wolfhound, Lummox, are revealed, all three dressed in hip, severe black, amid the prize-winning roses that have endeared Magda to the world of horticulture, as that word is grotesquely understood in the very seat of Gallic culture. The show itself is simple, austere, elegant: a collection of letters from friends and enemies; wide-ranging commentary—favorable, vicious, perceptive, stupid, toadying—on certain apssages in the letters, from over twenty years worth of Kuthian studies and criticism; the criticism, in full, itself; Kuth’s remarks on the studies, the criticism, and the commentary of the commentary on the letters; a jumbled display of Kuth’s tattered notebooks, containing alternative commentary on the commentary on the letters; a blank notebook, its pages fanned out, provocatively perched upon a ream of cheap white paper; and a small black-and-white snapshot of Magda, playfully sucking Moss off under the pines at Yaddo, often called “the Yaddo pines.” Located at the extreme edges of the display are letters from both Kuth and Magda to each other, stained with what appears to be dog shit, agreeing with all the negative commentary on Kuth’s work, and wholly composed in crude, ungrammatical, trite and shrewdly misspelled English, an English, as Magda has impishly noted, “that is hours all own.”

John Tranter’s munificently included a tranche de vie, excerpting several days in May, out of Isola di Rifiuti, amongst the marvellous signs and wonders of Jacket. My sincerest appreciation. 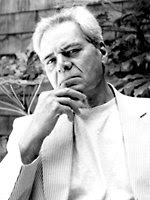