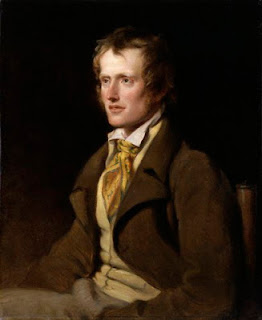 Against the fraught pell-mell tumult of the days ongoing with their quotidian concerns, a momentary stay and conservatory found in reading John Clare’s Journal (1824-25), its measure defiantly slowed, its uncommon sense of continual gathering (of “things I may read or see”). A man attending. Out of The Prose of John Clare (1951), edited by J. W. and Anne Tribble:

Mon. 13 Sept. 1824. Wrote 2 or 3 more pages of my Life—read some of the Sonnets of Shakespear which are great favourites of mine & lookd into the Poems of Chatterton to see what he says about flowers & have found that he speaks of the lady-smock:

as well as my favourite line of

The kingcups brasted with the morning dew

Tues. 14 Sept. 1824. Continued the reading of Chatterton in search for extracts to insert in my natural history inserted them in the Appendix—I was struck with the many beautifull & remarkable passages which I found in them what a wonderful boy was this unfortunate Chatterton I hate the name of Walpole for his behaviour to this Genius & his sneering & cold-blooded mention of him afterwards when his gossiping fubble had discovered them to be forgeries why did he not discover the genius of the author no because they surpassed his Leadenhall forgery of ‘Otranto’*

Mon. 1 Nov. 1824. Took a walk to Lolam Brigs to hunt for a species of fern that usd to grow on some willow tree heads in Lolham lane when I was a boy but coud find none got some of the yellow water-lily from the pits which the floods had washed up to set in an old water-tub in the garden & to try some on land in a swaily corner as the horse-blob thrives well which is a water flower listend in the evening to Glinton bells at the top of the garden I always feel mellancholy at this season to hear them & yet it is a pleasure

Tues. 2 Nov. 1824. Set some box edging round a border which I have made for my collection of ferns read some passages in Blair’s Grave a beautiful poem & one of the best things after the manner of Shakespear its beginning is very characteristic of the subject there are crowds of beautiful passages about it who has not markd the following aged companions to many such spots of general decay

. . . a row of reverend elms,
Long lashd by the rude winds. Some rift half down
. . . others so thin atop
That scarce two crows could lodge in the same tree.

Mon. 15 Nov. 1824. Went to gather pootys** on the roman bank for a collection found a scarce sort of which I only saw 2 in my life I pickd up under a hedge at Peakirk town-end & another in Bainton meadow its color is a fine sunny yellow larger than the common sort & round the rim of the base is a black edging which extends no further than the rim it is not in the collection at the British Museum

Tues. 23 Nov. 1824. Some months back I began a system of profiting by my reading at least to make a show of it by noting down beautiful odd or remarkable passages—I immitations in the poets & prosewriters which I read & I have inserted some likenesses [?] of Lord Byrons about which there has been much nattering & ink shed I never saw some of them

Wed. 8 Dec. 1824. Found the common Pollypody on an old Willow tree in Lolham Lane & a small fem in Hilly Wood scarcely larger than some species of moss & a little resembling curld parsley I have namd it the dwarf maidenhair & believe it is very scarce here

Mon. 13 Dec. 1824. Bought a Moore’s Almanack with its fresh budget of wonderful predictions on the weather & the times alterd with such earnest ambition of pretending truth that one shoud think the motto ‘the voice of the heavens’ &c means nothing more or less then the voice of Moors Almanack &c—saw 2 Will o’ Whisps last night

Tues. 14 Dec. 1824. A coppled crownd Crane shot at Billings’s pond in the Green—’Twas 4 foot high from the toes to the bill on the breast & rump was a thick shaggy down full of powder which seem to be a sort of pounce-box to the bird to dress its feathers with to keep out the wet its neck & breast were beautifully staind with streaks of watery brown its wings & back was slate-grey the down on its head was of the same color

Sun. 26 Dec. 1824. Found at the bottom of a dyke made in the roman bank some pootys of varied colors & the large garden ones of a russet color with a great many others of the meadow sort which we calld ‘badgers’ when I was a schoolboy found nowere now but in wet places—there is a great many too of a water species now extinct—the Dyke is 4 foot deep & the soil is full of these shells have they not [lain] here ever since the romans made the bank & does the water sorts not imply that the fields were all fen & under water or wet & uncultivated at that time I think it does—I never walk on this bank but the legions of the roman army pass by my fancys with their mysterys of nearly 2000 years hanging like a mist around them what changes hath passd since then—were I found these shells it was heath land above Windy Well

Sun. 27 Feb. 1825. Recievd a letter in rhyme from a John Pooley—a very dull fooley—who ran me 10d further into debt as I had not money to pay the postage.

Tues. 1 Mar. 1825. Saw today the largest piece of Ivy I ever saw in my life mailing a tree which it nearly surpassd in size in Oxey Wood it was thicker than my thigh & its cramping embraces seemd to diminish the tree to a dwarf—it has been asserted by some that ivy is very injurious to trees & by others that it does no injury at all—I cannot decide against it—the large pieces were coverd all over with root-like fibres as thick as hair, & they representd the limbs of animals more than the bark of a tree

Sat. 16 April. 1825. Took a walk in the field a birds nesting & botanizing & had like to have been taken up as a poacher in Hilly wood by a meddlesome conseited keeper belonging to Sir John Trollop he swore that he had seen me in act more than once of shooting game when I never shot even so much as a sparrow in my life—what terrifying rascals these woodkeepers & game-keepers are they make a prison of the forrests & are its gaolers

Tues. 26 April. 1825. This used to be ‘Breakday’ when the fen commons used to be broke as it was calld by turning in the stock it used to be a day of busy note with the villages but Enclosure has spoiled all

Wed. 10 Aug. 1825. A Newspaper lye of the first order—Mr Gale of Holt[?] in the parish of Bradford Wilts has at present a Pear of the jargonel kind in his possession which was taken by himself from the tree in 1776, 49 years ago & is now as sound as at the first moment it was gathered. It is hung up by the stalk & no means whatever has been adopted to preserve it—’ it must have been a wooden one

Clare’s ready skepticism and self-reliance. Meaning resides in use. In a fragment, he writes a kind of processual manifesto:

And, too, a recipe for ink:

* The editors: “. . . the authorship of Walpole’s novel The Castle of Otranto was not declared till a second edition was called for within a year of its publication in 1764. Walpole had pretended the work was a translation from an Italian MS. of 1529. The completely unreal story richly deserves Clare’s contemptuous epithets of commercial falsity.” The lovely word fubble: “Entretouiller, to mingle, intangle, confound, fubble vp things together.” Brast: “Northern form of burst. Out of Gavin Douglas’s Æneid: “The fyry sparkis brastyng from hys eyn.”

** Pooty: “The banded or grove snail, Cepaea nemoralis. The OED quotes a line out of Clare’s poem “The Village Minstrel” (1821), its earliest usage: “Searching the pooty from the rushy dyke.”