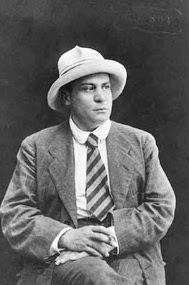 South: mockingbirds and live oaks. Pawnshops. In downtown Houston, a horseback-bolstered Ranger shouting down into the window of a pulled-over Mustang. (Black man on the bus, with contempt, a knowing species resigned scorn: “Only in America.”) Second Ranger looking rather small and inconsequential atop an enormous chestnut-colored horse. He’s furiously texting something: the pointedness of the finger-flurry an anomaly against the ranging ample placidity of the beast.

In air reading (out of In the American Grain), muscled up by “the horrid beauty of its great machines,” loving Williams’s rarely quasi-ambivalent judgment of the place, the New World with its unceasing Puritan grip and its “agonized spirit, that has followed like an idiot with undeveloped brain, governs with its great muscles, babbling in a text of the dead years”):

It has become “the most lawless country in the civilized world,” a panorama of murders, perversions, a terrific ungoverned strength, excusable only because of the horrid beauty of its great machines. Today it is a generation of gross know-nothingism, of blackened churches where hymns groan like chants from stupefied jungles, a generation universally eager to barter prominent values (the hope of an aristocracy) in return for opportunist material advantages, a generation hating those whom it obeys.

Though, later, somewhere between the initial aborted attempt to land in Charlotte (“heavy tailwind . . . we’re just going to circle around and come in out of the north”) and the limp (and pricey) sandwich, Williams’s own naysaying “resistant core” protrudes even in Old World Paris, whence he’d got, finally, to “shed . . . nerves” after a “brutalizing battle of twenty years to hear myself above the boilermakers in and about New York.” Thus:

I was, during that time, with antennae fully extended, but nothing came of it save an awakened realization within myself of that resistant core of nature upon which I had so long been driven for support. I felt myself with ardors not released but beaten back, in this center of old-world culture where everyone was tearing his own meat, warily conscious of a newcomer, but wholly without inquisitiveness—No wish to know; they were served . . .

In terminal, under CNN’s tediously repetitious scouring of the brain-space, surrounded by travelers wholly “absorpte and ouercummed” by clutched digital gadgetry, there’s Williams visiting Valery Larbaud, coming a cropper up against the pervading lack:

Who are we? Degraded whites riding our fears to market where everything is by accident and only one thing sure: the fatter we get the duller we grow; only a simpering disgust (like a chicken with a broken neck, that aims where it cannot peck and pecks only where it cannot aim, which a hog-plenty everywhere prevents from starving to death) reveals any contact with a possible freshness—and that only by inversion . . .

And, the blunt perennial query: “Must I make a choice between to scream like a locomotive or to speak not at all?”

Detroit, midnight. Trails of orange runway lights infusing the blacker surround. (Emerson: “Temperament puts all divinity to rout.”) Narrow circuitries of roads here and there fattening up to intersect. Usual habit-fueled drive to Ann Arbor. (With all the “impudent knowingness” of a horse . . .)
Posted by John Latta at 7:26 AM