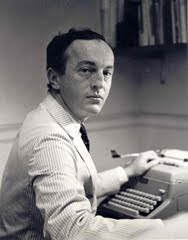 Out of the rather scarce memorial gathering, That Various Field for James Schuyler, edited by William Corbett and Geoffrey Young (The Figures, 1991), the beginning of a letter, Frank O’Hara to James Schuyler. Spur and incitement to an edition of O’Hara letters, sorely needed, needlessly withheld. (“What thou lov’st well is thy true heritage / Whose world, or mine or theirs / or is it of none?”) The letter written in Cambridge where O’Hara’d just begun a short (and not entirely happy) residency as playwright at the Poets’ Theatre. O’Hara’d written only a single poem* in the preceding month or so (see “I have been quite depressed about not being able to think of a fucking thing to write, to write about or to write around, even . . .”). On the next day (12 February 1956), he’d write “The Bores”:

Detraction is their game.
Like parrots, they caw forth
the ennui of the last time
that was theirs, and always
will be, empty. Unaware of what
is, or what’s moving toward,
with their sharp wings over
their eyes and tongue on palate
and beak on seat, they take each
singular event for someone’s
dear convention. Use an eraser
to take notes for their article.
The difficult is foreign and
the simple vulgar, to them.
They entertain each other.

11 February 1956
Dear angel,
How are you? I’ve not written before because I expected to be basking in the sunshine of your smile this weekend and then couldn’t manage it. That is, I really could have, but it wouldn’t have been far from astronomical considering the trip to Philadelphia which I couldn’t have avoided if I’d gotten as far as NY and not doing either will put me in a good position for a visit next month. Besides which I have been quite depressed about not being able to think of a fucking thing to write, to write about or to write around, even. But now, things are clearing up a bit so I hasten to beat your ears a bit with my affectionate but endless clacking. I have been having a terribly spiritual morning bathing in Poulenc songs, 2 piano concertos and Les Sécheresses which I found here. (It is greater than Tristan, so there!)
No doubt you’re talked to Joe now so I won’t go into his visit which was very nice and made me feel familiar with this apartment with little strain on the psyche. It seemed like camping out. He did a lot of writing, I a lot of reading. Jimmy Merrill and David Jackson came for a drink one Sunday and asked for you and your novel. Jimmy has just finished one and said he thought it was the most difficult thing to do in the world and is eager to see yours.
I’m sorry you were at Fairfield’s when I wrote him a long letter without my knowing so, as I felt like a blind pig when I found out: sort of Where are you? Where am I? how big is this world anyway?-ish. I long to see you and have an interminable chin, languishing and irrevocable, while La Vida Breve is olé-ing in the background. I discovered it here in a pile of things and adore it. This apartment** has pretty views of roof tops and one steeple as I imagine Paris must be toward twilight. Where are you coming to visit me? As you know by now from Joe, TPT is doing Ashes’ The Compromise in the middle of March, but why wait till then?
I asked Kenneth to show you my little one-act play “The Moon Also Rises” which I gave him. Has he? What do you think of it? Is it hell, as I suspect? Bunny thinks that one more one-act play of the same general sort would make a nice evening with “The Houses at Falling Hanging,” which is an idea, I guess. I suppose it (the three) would have to be called “Exurbanites on Terraces” or something. Ugh. I’m losing my marbles a little too early in the game, aren’t I?
Grove Press (Barney Rosset) wrote me that they want to see another or the same manuscript of poems I showed them a couple of years ago and I’m making something up on the order of the one you helped me with for Wystan. I shall try not to send it off till you see it with your clippers, pruners, and (I hope) grafting equipment. How would you like to take a couple of weeks off and rewrite the whole mess for me? I must tell you a couple of cute things about the reading with Roger Shattuck which I felt was rather encouraging (no fear of this!), in the sense that when people I don’t like or admire turn out to like my work it makes me extremely uneasy. Then:

Bunny: How did you like O’Hara?
Martin Halpern***: If that’s poetry I might as well give a reading myself.
Bunny: Oh?
MH: I don’t think we should have readings like that in the theatre.
Bunny: Well, he is the playwright in residence. We’re introducing him.
MH: Well, I just hope he’s better at plays.

David Jackson: I loved that poem about James Dean that John Myers read us Christmas Eve. Me: (going to bathroom): Thanks.
Mac Hammond****: Is that the same one he read at the reading here?
Joe: Yes. Obituary.
Mac: It’s a terrible poem.
I return, zipping my pants probably.
Mac: That Obituary poem of yours is terrible.
Silence.
Me: Well, shall we go to dinner? (Freddy English and Joe were furious.)

Do you think this means I have taken some brilliant technical stand? And if so what? George Montgomery remarked about this incident and Mac: “I’m afraid he’s one of those people who can’t just go out of a room. He always has to leave a turd in the middle of the floor.” Actually he’s been quite pleasant lately and I like him much better than I did after our Remo encounter.
Lyon has a recording of the Goyescas of Granados which is enough to make the whole six months worthwhile. The only one of them I knew before is “The Maiden and the Nightingale.” They are as beautiful as a black lace scarf lying beside a gleaming white toilet bowl. Or, as Rimbaud says in “Mémoire,”
Eau claire;*****
I haven’t gotten a haircut since I arrived here, the barbers all look so menacingly proficient, and I look rather like Julio de Diego. Or in dungarees, like a Universal-International extra playing a gun-slinging punk in a $25 budget Western. But you will still like the back of my head, I hope . . .

It is still raining and the yellow-green cotton fruit
looks silly round a window giving out winter trees
with only three drab leaves left. The hot plate works,
it is the sole heat on earth, and instant coffee. I
put on my warm corduroy pants, a heavy maroon sweater,
and wrap myself in my old maroon bathrobe. Just like Pasternak
in Marburg (they say Italy and France are colder, but
I’m sure that Germany’s at least as cold as this) and,
lacking the Master’s inspiration, I may freeze to death
before I can get out into the white rain. I could have left
the window closed last night? But that’s where health
comes from! His breath from the Urals, drawing me into flame
like a forgotten cigarette. Burn! this is not negligible,
being poetic, and not feeble, since it’s sponsored by
the greatest living Russian poet at incalculable cost.
Across the street there is a house under construction,
abandoned to the rain. Secretly, I shall go to work on it.

*** Composer, librettist, poet, playwright. Then working toward a Ph.D. in English and American Literature at Harvard.

**** Poet and, subsequently, professor of English at Buffalo.

Clear water; like the salt of childhood tears,
the assault on the sun by the whiteness of women’s bodies . . .