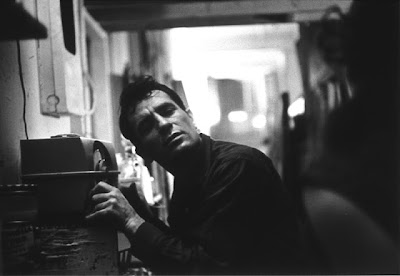 And I know I am solid and sound,
To me the converging objects of the universe perpetually flow,
All are written to me, and I must get what the writing means.

I feel the carousel starting slowly
And going faster and faster: desk, papers, books,
Photographs of friends, the window and the trees
Merging in one neutral band that surrounds
Me on all sides, everywhere I look.
And I cannot explain the action of leveling,
Why it should all boil down to one
Uniform substance, a magma of interiors.

And Emerson’s sense (in “Nature”) of analogical man as a kind of Poundian “unwavering axis” or “rose in the steel dust,” constant, pervading:

. . . man is an analogist, and studies relations in all objects. He is placed in the centre of beings, and a ray of relation passes from every other being to him. And neither can man be understood without these objects, nor these objects without man . . .

“I made it out of a mouthful of air” wrote Bill Yeats in his heyday. The forma, the immortal concetto, the concept, the dynamic form which is like the rose-pattern driven into the dead iron-filings by the magnet, not by material contact with the magnet itself, but separate from the magnet. Cut off by a layer of glass, the dust and filings rise and spring into order . . .

Or, too, out of Canto LXXIV:

This liquid is certainly a
property of the mind
nec accidens est     but an element
in the mind’s make-up
est agens and functions     dust to a fountain pan otherwise
Hast ’ou seen the rose in the steel dust
(or swansdown ever?)
so light is the urging, so ordered the dark petals of iron
we who have passed over Lethe.

Source of Robert Duncan’s own “property of the mind” and unwavering pivot (“everlasting omen”) of “what is” (out of “Often I Am Permitted to Return to a Meadow”):

Often I am permitted to return to a meadow
as if it were a given property of the mind
that certain bounds hold against chaos,
that is a place of first permission,
everlasting omen of what is.

Is it Whitman’s “solid and sound”—with a sidelong hint at the tangibility of its yawp—or Ashbery’s “magma” that calls forth Jack Kerouac’s Old Angel Midnight with its “haddal-da-babra of babbling world tongues coming in thru my window at midnight . . . the sounds of people yakking and of myself yakking among, ending finally in great intuitions of the sounds of tongues throughout the entire universe in all directions in and out forever . . .”—another implacable convergence, the purest there is, one “mouthful of air” after another? Kerouac:

Boy, says Old Angel, this amazing nonsensical rave of yours wherein I spose you’d think you’d in some lighter time find hand be-almin ya for the likes of what ya devote yaself to, pah—bum with a tail only means one thing,—They know that in sauerkraut bars, god the chew chew & wall lips—And not only that but all them in describable paradises—aye ah—Angel m boy—Jack, the born with a tail bit is a deal that you never dream’d to redeem—verify—try to see as straight—you wont believe even in God but the devil worries you—you & Mrs Tourian—great gaz-zuz & I’d as lief be scoured with a leaf rust as hear this poetizin horseshit everywhere I want to hear the sounds thru the window you promised me when the Midnight bell on 7th St did toll bing bong & Burroughs and Ginsberg were asleep & you lay on the couch in that timeless moment in the little red bulblight bus & saw drapes of eternity parting for your hand to begin & so’s you could affect—and eeffect—the total turningabout & deep revival of world robeflowing literature till it shd be something a man’d put his eyes on & continually read for the sake of reading & for the sake of the Tongue & not just these insipid stories writ in insipid aridities & paranoias bloomin & why yet the image—let’s hear the Sound of the Universe, son, & no more part twaddle—And dont expect nothing from me, my middle name is Opprobrium . . .

Tailing off into “birds & firewood” (“Pirilee pirilee, tzwé tzwi tzwa,—tack tick”), sound of the self clocking out to listen in . . .
Posted by John Latta at 6:27 AM