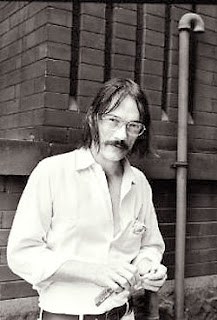 Gritty snow flailing down, liable, they say, to “turn” to rain. Reading in lurches, writing some God-awful truck (“There’s a kind of automatism / That relegates casuistry to a side- / Pocket, dumps the eight ball in / With no posturing, no gait of / The soldat making a method of / The body’s own taut hindrance, its / Poise. You’re barely a speck now, / Moving across the plain with no / Visible evidence pertaining to the engine / Of your going. Like a lunatic / Marinating a jawbone in a soup, / Like a semi-detached rearview mirror, / Like a stiff pollen-made honey / Gucking up the cake batter, like / A pertinacity of finches thieving sun- / Flower seeds . . .”) A little pocket of things slung loose, as is my late wont, of the harness of thinking . . .

Canterbury Tales, it’s a long poem that incorporates—that’s a good word, with the gross corp, the body in it, the fart wheel, the big peckers and pants full of shit or a lusty woman with a gap between her front teeth, the church on one horse, the bawd on another—and I remember that Anselm Hollo in 1966, a year before bp started on his lifetime’s epic, wrote naughty words in the gleaming pigeon poop on a bridge in Hyde Park, poetry gone contrary on the whited sepulchre.
So also does Charles Olson’s own pilgrimage, celebrating or detailing a Massachusetts fishing town older than USAmerican history—lately filled with Italians instead of Adamses—make the most recent great Amerk poem, out of the narrative of a giant smoking man’s breath, necessarily oppositional, a form of love that “is form, and cannot be without / important substance,” one substance being the “gurry of it” that the speaker, so we have been taught to call him, is covered with, so that this big human mammal boasts the holes in his clothes, “my fly / gaping, me out / at the elbows”—the funniest misdirection in midcentury poetry, but is it really misdirecting? Someone he purports to be quoting says that in the face of sweetness a poet should

Olson, out of “The Songs of Maximus”:

colored pictures
of all things to eat: dirty
postcards
And words, words, words
all over everything
No eyes or ears left
to do their own doings (all

including the mind, that worker on what is
And that other sense
made to give even the most wretched, or any of us, wretched,
that consolation (greased
lulled
even the street-cars

all
wrong
And I am asked—ask myself (I, too, covered
with the gurry of it) where
shall we go from here, what can we do
when even the public conveyances
sing?
how can we go anywhere,
even cross-town
how get out of anywhere (the bodies
all buried
in shallow graves?

“In the midst of plenty, walk
as close to
bare
In the face of sweetness,
piss
In the time of goodness,
go side, go
smashing, beat them, go as
(as near as you can

In the land of plenty, have
nothing to do with it
take the way of
the lowest,
including
your legs, go
contrary, go

Out of “Poetry Summer,” Bowering’s diary notes made during the period of Olson’s teaching (“Big man reaching down to shake my hand. Impossible to register . . .”) at the University of British Columbia in Vancouver in 1963:

Monday, August 5, 1963, 3:53 p.m.
Today for the first time I went to Olson’s seminar, and I got one specific (and there seems to be a dearth of them). The reason he goes to the root of a word becomes clear when you know that root is not a historical (fake) thing from which the word evolved; but rather the ROOT that is still there, feeding the branches we eat. That is, in 2100 AD we speak the same organic language(s) we spoke in 2100 BC, and there is no reason to fix that false historical date on it . . .

Out of Clark Coolidge’s “Notes Taken in Classes Conducted by Charles Olson at the University of British Columbia, Vancouver, August 1963” (Olson: The Journal of the Charles Olson Archives, No. 4 / 1975):

“no need to go to school anymore
the literacy lies in Indo-European language”
2100 B.C.
that has come down to us recently
opened up
thru Hesiod (Greek)
& Homer

“what is called ‘The Wisdom of The East’ is just something
which was in the Indo-European 2100 B.C. language
to begin with”

“we’re not interested any longer in what a poem is
but what it can do!”

mouth is organ of creation (heart & tongue)
language is heritage & invention of man
(not science)
“before 2100 B.C. you were not allowed
to speak, if the word sounds
were not used in sacred sense
(excitations)”

“write the words you know”
“there’s a moment when you feel
oh man, I did
get hold
of a word”

Peter Auxier: “language is something you have to get into
rather than something that’s in you, to be got out”

“self expression is not enough”

“take the meanest little possibility
rather than
the grandest”

“get soused in language—strictly without any attitude from
outside”
“no help at all”
Duncan says: the language comes in & gets you

Olson: “you’ll never hear me use the word ‘magic’”

The apt Poundian brief, one of the “functions” of criticism limned in “Date Line”:

Theoretically it tries to forerun composition, to serve as gun-sight, though there is, I believe, no recorded instance of the foresight having EVER been of the slightest use save to actual composers. I mean the man who formulates any forward reach of co-ordinating principle is the man who produces the demonstration.
The others who use the principle learn usually from the example, and in most cases merely dim and dilute it.
I think it will usually be found that the work outruns the formulated or at any rate the published equation, or at most they proceed as two feet of one biped . . .

The way it refutes its own formula, denying saying’s intent beyond the unprompted occasion of its saying.
Posted by John Latta at 7:31 AM