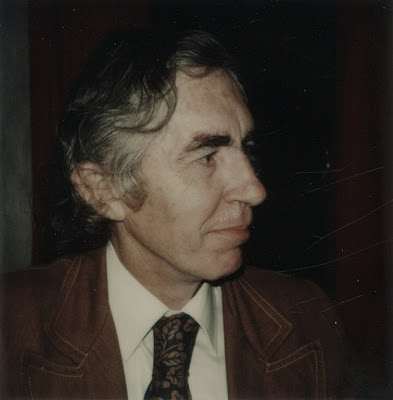 In the dog-walking: usual faint intermittent whutter of the screech owl. Unusual: to see it perched, stumpy and quizzical, about twenty feet up a maple. Stood long and looked at its swivel way of looking, appeasing and intent.

Out of the Jill Turnbull and Hamish Whyte-edited More Words: Gael Turnbull on Poets and Poetry (Shearsman / Mariscat, 2012), a gallimaufry of Bunting notes (out of a Turnbull notebook dated “Winter ’64 / ’65”):

He was Ford Madox Ford’s “young man” for a few months, in the ’20s, the ostensible job to help with the editing of The Transatlantic Review. He helped correct the proofs of the first book of the Parade’s End sequence. Ford had had some sort of verbal tic, ending sentences with the same word. B. had crossed this out through the whole ms. At first FMF seemed upset. Then sat counting them, up to 40 or more. Then let B. finish. “I rewrote quite a lot of it. He seemed satisfied.” But the job grew bit by bit, so that he was changing the baby’s nappies and doing other household chores. Hemingway succeeded him.

One day Hemingway came to see them, reported that he had found a café with a supply of prewar Guinness The 3 went. Finished every bottle. It took them 3 day of steady drinking. Going out for food at times in between.

Remembers Yeats in Italy, talking at a café with him and some others, “If the British public knew what we were saying they’d hang us all!” That Yeats was often with people, the conversation around him and might not hear a word all evening, lost in some reverie. But if jogged would attend to a specific question or remark.

When Eliot became editor of the Criterion he said to B, “No one should be an editor for more than 2 years.” He stayed on for twenty.

When, in Paris in the ’20s, Eliot declared himself a Royalist, an Anglican etc., B. says it was really all a sort of joke, just to be different. As time went by, he began to believe it.

Yeats had memorized one of B’s poems, and used to recite it. The one about foam.*

Eliot rejected ‘Chomei’** (from the Criterion) on the grounds (says B.) that B. had never lived in Japan & didn’t know any Japanese. “I might have done the same, if I’d been editor.” The version is made from an Italian translation fo be found in Italy. But despite the, he had had it from some Japanese that his version retains a remarkably fine sense of the original.

He picked up a book of translations, in Italian, from the Persian, in some bookshop on the coast. But it was defective, the last 1/3 missing. Pound bought & gave him (1) the complete original Persian text (2) a dictionary. He worked through it this way, without a grammar. He learned Italian the same method, using Dante; “the only way to really learn a language. Slow, but thorough. Piecing the grammar together yourself as you go.” But when he went to Persia, in the war, as “an expert”, he had never spoken a word or heard it spoken.

He smokes heavily, especially when sitting talking, if not exactly a chain smoker. Has a shocking cough at times. The veins standing out in his neck & forehead. Slightly nicotine fingers. His moustache down hiding the upper lip altogether, somewhat yellowed, staining the grey. Bushy eyebrows that curl upwards at the corners. (I remarked to him that I like the profile photo of him used for the Morden Tower Reading poster, but that it missed his “devil’s eyebrows”. He laughed & seemed to like this.) A lot of hair in his ears. Become a bit stooped & shuffling since my first seeing him in 1956. Rather more obviously only enjoying “old man’s talk”. Reminiscences of the past. Though brightening always at any mention of Tom Pickard.

It was Basil’s idea, the name, King Ida’s Watch Chain.*** What the local people call a huge anchor chain dredged up from the sea which hangs in the hall at Bamburgh Castle.

Once he wrote rather a sharp review or comment in Hound and Horn, on something by Yvor Winters, who in turn wrote to him in Italy, making a physical challenge of it! It so happened the Gene Tunney was there, and wrote back for him, saying that he (Tunney) would accept the challenge on Bunting’s behalf. They didn’t hear from Winters again!

He said, “I’ve done most of the things a man ought to do.” He repeated this several times. A sense of what may be known by a man, directly. But then qualified it, a little sadly, “well most of the things, 75% anyway. But I never learned to fly. It is one of my regrets. And I’m too old now. My eyesight is too bad.” (He uses two different pairs of glasses.)

I asked him if he could think of any other British poets of his (or near) generation, who had been unjustly neglected or forgotten. “There isn’t anyone else. The only one whom I think had some of the genuine article in him, is Dylan Thomas.” I asked about Joseph Gordon Macleod.**** He laughed. “In 1932, we were asked to pick who we thought would come to something. Ezra picked Macleod and I picked Auden.”

He felt that the ‘Four Quartets’ were badly flawed. And that Eliot has a dead ear. “He beats a drum. His beat is too obvious and boring. It goes thump thump thump. It isn’t even as subtle as Kipling can be. Kipling can be very good, you know”. He also admired Hardy. “That’s one of my regrets. That I never went to see the old man. It would have been quite easy. But I never went.

I am agog for foam. Tumultuous come
with teeming sweetness to the bitter shore
tidelong unrinsed and midday parched and numb
with expectation. If the bright sky bore
with endless utterance of a single blue
unphrased, its restless immobility
infects the soul, which must decline into
an anguished and exact sterility
and waste away: then how much more the sea
trembling with alteration must perfect
our loneliness by its hostility.
The dear companionship of its elect
deepens our envy. Its indifference
haunts us to suicide. Strong memories
of sprayblown days exasperate impatience
to brief rebellion and emphasise
the casual impotence we sicken of.
But when mad waves spring, braceletted with foam,
towards us in the angriness of love
crying a strange name, tossing as they come
repeated invitations in the gay
exuberance of unexplained desire,
we can forget the sad splendour and play
at wilfulness until the gods require
renewed inevitable hopeless calm
and the foam dies and we again subside
into our catalepsy, dreaming foam,
while the dry shore awaits another tide.

** “Chomei at Toyama” (1932). With the lovely lines: “I sweep my own floor / —less fuss. / I walk; I get tired / but do not have to worry about a horse. // My hands and feet will not loiter / when I am not looking. / I will not overwork them.” And: “I am shifting rivermist, not to be trusted. / I do not ask anything extraordinary of myself. / I like a nap after dinner / and to see the seasons come round in good order. // Hankering, vexation and apathy, / that’s the run of the world. / Hankering, vexation and apathy, / keeping a carriage wont cure it.” And ending:

I have renounced the world;
have a saintly
appearance.

I do not enjoy being poor,
I’ve a passionate nature.
My tongue
clacked a few prayers.

*** Tom Pickard-edited periodical, dated 1965, one issue only. “It contained poems by Bunting, early photos of the poet, essays on his work, reprints of reviews and a facsimile of a manuscript.”

**** The editors’ note: “Joseph Gordon Macleod (1903-1984). One of the ‘lost’ British modernist poets, he was rated highly by both Pound and Bunting in the ’30s. His most notable work is perhaps the long poem The Ecliptic (London: Faber & Faber 1930). The only modern edition of his poetry is Cyclic Serial Zeniths from the Flux. Selected Poems ed. Andrew Duncan (Brighton: Waterloo Press 2009).” A short piece out of Cyclic Serial Zeniths:

Strings of a harp glinting
rose-red, blood-red, stone, and gold,
wires of seaweed
cornelian, amber on a stiff beach
culled by fingers tensed on darting hands,
hard fish transmitting curling and whirling waves
in surf-roar and rattle of hurrying shingle
with a hungry coral-clawed sea-crow calling
raising its head as it follows
invisible casts.

No no no no this water is not tidal
not salt not marine.
It brims silver in green fields rose-red and amber are osier shoots
feathering in the early bursts of December.

And my hands are empty
They hang
glove-muffled
at my tailored hips.

Being short, not, perhaps, entirely exemplary of Macleod’s work . . . 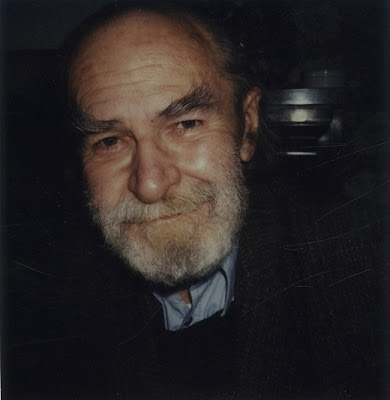