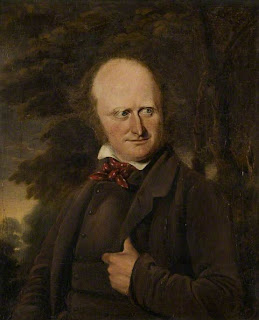 Cold and blowy, the crows assembling in the dire oaks. Spotty reading, irregular sleep. On committal papers for John Clare, entering the asylum at Northampton, in reply to a query whether Clare’s madness “was preceded by any severe or long continued mental emotion or exertion,” the exculpatory squib: “After years addicted to Poetical prosing.” Bookseller Edward Drury, writing (c. 1819) to John Taylor, Clare’s publisher:

It is to be greatly feared that the man will be afflicted with insanity if his talent continues to be forced as it has been these 4 months past; he has no other mode of easing the fever that oppresses him after a tremendous fit of rhyming except by getting tipsy. A single pint of ale very often does this, and next morning a stupor with head-ach and pains across the chest afflicts him very severely. Then he is melancholy and completely hypochondriac.
You will easily suppose how true is my account when I assure you he has rhymed & written for 3 days and 3 nights without hardly eating or sleeping . . .

(One recalls the “kept” doings of Jean-Michel Basquiat, another supposed “primitivist.”) Clare himself, in a late (2 August 1844) poem:

I snatch’d the sun’s eternal ray—
And wrote ’till earth was but a name.

How right John Ashbery’s lines in “For John Clare”:

. . . The feeling that the sky might be in the back of someone’s mind. Then there is no telling how many there are. They grace everything—bush and tree—to take the roisterer’s mind off his caroling—so it’s like a smooth switch back. To what was aired in their previous conniption fit. There is so much to be seen everywhere that it’s like not getting used to it, only there is so much it never feels new, never any different . . .

Or, later, the spelled-out futility of the possibility of “mutual cohesion and interaction,” what beckons, nevertheless, off there in a liminal state (“like coming to the end of a long, barely perceptible rise”):

. . . Seasons that pass with a rush. After all it’s their time too—nothing says they aren’t to make something of it. As for Jenny Wren, she cares, hopping about on her little twig like she was tryin’ to tell us somethin’, but that’s just it, she couldn’t even if she wanted to—dumb bird. But the others—and they in some way must know too—it would never occur to them to want to, even if they could take the first step of the terrible journey toward feeling somebody should act, that ends in utter confusion and hopelessness, east of the sun and west of the moon. So their comment is: “No comment.”

We are far from emotion recollected in tranquillity or even the gently shaping music of Keats’s grasshopper sonnet.* Clare’s poems are dispatches from the front. “I found the poems in the fields / and only wrote them down,” he wrote, and he tells us that a favorite method of composing was in the open, using his hat as a writing desk. The resulting plein-air effect is similar to the studies of John Constable, Clare’s exact contemporary. In the case of both, the point is that there is no point. Clare is constantly wandering, in his circumscribed domain, but there is not much to see; the land is flat and fenny and devoid of “prospects.” Unlike Wordsworth’s exalted rambles in “The Prelude,” there is no indication that all this is leading up to something . . .

Precisely. “So their comment is: ‘No comment.’” Clare, all tangibility and exactitude to no particular end beyond itself:

Out of a poem called “Evening” (dated “Feby 13th / 47”). Earlier in the piece, the line “the sun is two yards high” oddly recalls the fragment of Heraclitus regarding the size of the sun: “The width of a human foot.”** Or, too (out of a late piece titled “Song”), more of Clare’s birds (and Maria, a “gipsey with brown swarthy cheek”):

How lovely, that hair undone with all the disgathering ebullience of a thundercloud. In a late fragment, Clare writes:

(And Ashbery: “As long as that couple is stopping to look in that window over there we cannot go. We feel like they have to tell us we can, but they never look our way and they are already gone, gone far into the future—the night of time. If we could look at a photograph of it and say there they are, they never really stopped but there they are. There is so much to be said, and on the surface of it very little gets said.”)

On the Grasshopper and Cricket

The Poetry of earth is never dead:
When all the birds are faint with the hot sun,
And hide in cooling trees, a voice will run
From hedge to hedge about the new-mown mead;
That is the Grasshopper’s—he takes the lead
In summer luxury,—he has never done
With his delights; for when tired out with fun
He rests at ease beneath some pleasant weed.
The poetry of earth is ceasing never:
On a lone winter evening, when the frost
Has wrought a silence, from the stove there shrills
The Cricket’s song, in warmth increasing ever,
And seems to one in drowsiness half lost,
The Grasshopper’s among some grassy hills.

“The Poetry of earth is never dead”: a concluding structure is being erected in advance of the seeing eye, percipience staggering under the weight of human, too human conceit.

** Dante, in Il Convito, renders such palpable obviousness moot, applying “human reason” to the job of putting the sun at a distance whereat it vanishes entirely:

Thus we know that to most people the Sun appears of the width of a foot in diameter; and this is most false, for, according to the inquiry and the discovery which human reason has made with its skill, the diameter of the body of the Sun is five times as much as that of the Earth and also one-half time more, since the Earth in its diameter is six thousand five hundred miles, the diameter of the Sun, which to the sense of sight presents the appearance of the width of one foot, is thirty-five thousand seven hundred and fifty miles . . .