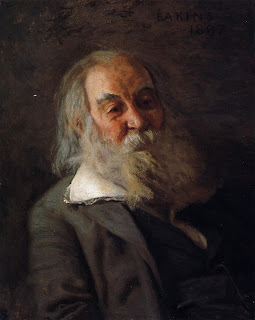 Thomas Eakins, “Portrait of Walt Whitman,” 1887
(“Eakins’ portrait of W. being mentioned, W. said: “It is about finished. Eakins asked me the other day: ‘Well, Mr. Whitman, what will you do with your half of it?’ I asked him: ‘Which half is mine?’ Eakins answered my question in this way: ‘Either half,’ and said again regarding that: ‘Somehow I feel as if the picture was half yours, so I’m going to let it be regarded in that light.’ Neither of us at present has anything to suggest as to its final disposition. The portrait is very strong—it contrasts in every way with Herbert Gilchrist’s, which is the parlor Whitman. Eakins’ picture grows on you. It is not all seen at once—it only dawns on you gradually. It was not at first a pleasant version to me, but the more I get to realize it the profounder seems its insight. I do not say it is the best portrait yet—I say it is among the best: I can safely say that. I know you boys object to its fleshiness; something is to be said on that score; if it is weak anywhere perhaps it is weak there—too much Rabelais instead of just enough . . .”)

Found in a book: “A Cancer is cured by a stuck Frog; which they call Glew of the Water: They tie a Frog to a staff and expose it to the rayes of the Moon, that so it may be reduced to its first matter, in form like a Frog but looking like dissolved Tragacanth.” Tragacanth: “A ‘gum’ or mucilaginous substance obtained from several species of Astragulus, by natural exudation or incision, in the form of whitish strings or flakes, only partially soluble in water.” (“Gum tragacanth is inodorous.”) Astragulus: “Any one of several low-growing spiny shrubs found in Persia and neighbouring regions, which yield gum tragacanth . . .” Knowing is a circle.

I picked up a stained piece of paper from under my heel and read it, looking at W. rather quizzically. “What is it?” he asked. I handed it to him. He pushed his glasses down over his eyes and read it. “That’s old and kind o’ violent—don’t you think—for me? Yet I don’t know but it still holds good.” I took it out of the hand with which he reached it back to me. “Put it among your curios,” he said, “you’ll have enough curios to start a Walt Whitman museum some day.” The note is below:

“Go on, my dear Americans, whip your horses to the utmost—Excitement; money! politics!—open all your valves and let her go—going, whirl with the rest—you will soon get under such momentum you can’t stop if you would. Only make provision betimes, old States and new States, for several thousand insane asylums. You are in a fair way to create a nation of lunatics.”

A couple of volumes of poetry from unknown writers reached W. by mail today. “Everybody is writing, writing, writing—worst of all, writing poetry. It’d be better if the whole tribe of scribblers—every damn one of us—were sent off somewhere with toolchests to do some honest work.”

I took W. a volume of Goethe-Carlyle correspondence. “This Goethe-Carlyle business seems to have been an affair of respect rather than of love. It was not beautiful to me, like Goethe’s love for Schiller, like Schiller’s love for Goethe.” I said: “You never seem to enter into such literary companionships.” “No—I do not: they are hardly possible to me: I do not seek them. I do not value literature as a profession. I feel about literature what Grant did about war. He hated war. I hate literature. I am not a literary West Pointer: I do not love a literary man as a literary man, as a minister of a pulpit loves other ministers because they are ministers: it is a means to an end, that is all there is to it: I never attribute any other significance to it. Even Goethe and Schiller, exalted men, both, very, very, were a little touched by the professional consciousness.”

Some anarchist was in to see W. today. W. did not know his name. “He was a stranger to me—a Russian, I think: clean, earnest, with a beautiful face—but too insistent: he would have me, whether I would or would not, say yes to his political, or revolutionary, program. We had no quarrel—I only made it plain to him that I was not to be impressed into that sort of service. Everybody comes here demanding endorsements: endorse this, endorse that: each man thinks I am radical his way: I suppose I am radical his way, but I am not radical his way alone. Socialists, single tax men, communists, rebels of every sort and all sorts, come here. I don’t say they shouldn’t come—that it’s unreasonable for them to come: the Leaves is responsible for them and for more than them. But I am not economically informed—I do not see the fine—even the coarse—points of difference between the contestants. I said to the Russian today: ‘Don’t ask me for too many definitions. Be satisfied with my general assurance. My heart is with all you rebels—all of you, today, always, wherever: your flag is my flag. Why should you want me to give you more?’ The fellow was sensible—said he had learned a thing or two—and went away. I think Emerson was sweeter with such men than I am—was more patient, was more willing to wait their talk out.”

Longfellow was mentioned. W. recalled a visit from L. “He came with Childs, but I was not at home—had just started off for the ferry. They came after me, followed me, and inquired of one of the men at the wharf, who told them I was on one of the boats, for which they waited, but our talk was very short.” The man they questioned at the ferry was Ed Lindell. After they had gone, and as Walt came from the boat, Lindell asked him the name of the man with the gray beard. W. told him but was more inclined to talk of Childs than of Longfellow. I asked W. about L.’s port and manners. W. said: “His manners were stately, conventional—all right but all careful.” Was his conversation striking? “Not at all—he did not branch out or attract.” Was he at all like Emerson? “Not a bit. Emerson was as different as day from night—indeed, had the best manners of any man I ever met: by this I mean manners in the right sense: manners, words, thoughts, always right, yet never at any time suggesting preparation or design. Emerson always seemed to know what he wanted. If I was asked to put him into two words, I should give ‘sincerity’ first—always first—and—oh! I had a more apt word a minute ago, but now it is gone: I may call it ‘definiteness’: yes, sincerity and definiteness. Emerson never lost this quality: in his last days, when it was said his mind had failed, he remained of this aspect: in fact, it seemed to me to be emphasized. Emerson only lost the outward, the superficial—the rest of him remained unharmed. I thought Alcott had really lost something. He came to see me in Brooklyn once just before Emerson. While Emerson was with me I asked him about this breakdown of memory or what-not in Alcott—but Emerson would not have it my way—he was gentle but firm—he opposed my observation. Emerson never lacked decision; he was indeed the firmest of men, never shaken from his place—unshockable—he never unhatted to any person or any power—any institution—never went out looking for things which did not come to him of their own accord. Alcott had a lot of queerities—freakishnesses: not vegetarianism—I do not count that—but transcendental mummeries—worst of all a most vociferous contempt for the body, which I, of course, opposed. I spoke to Emerson about these things that day—but my comments made no impression: I saw that Emerson had his own opinion of Alcott and was not going to let me disturb it—though that was not my intention: underneath it all I had every sort of respect for Alcott myself.”

A nine-volume entry into the nineteenth century, produced* on the eve of its departure. Guy Davenport (“Horace and Walt in Camden”):

On Wednesday the twenty-eighth of March 1888, the twenty-nine-year-old Horace Traubel began taking down in shorthand what Walt Whitman had to say in the poet’s upstairs bedroom on Mickle Street in Camden, New Jersey. “At Walt’s this evening. Called my attention to an old letter in the Philadelphia Press describing a visit to Emerson with Louisa Alcott, and Emerson’s senility.” Whitman was sixty-nine, not yet wholly house-bound. Traubel wrote up his visit within an hour of leaving the house. He kept to this routine until March 26, 1892, on which day Whitman died at sunset.

Horace Traubel published the first volume of these daily conversations as With Walt Whitman in Camden in 1906. A second volume came out, with a different publisher, in 1908; a third, with yet another, in 1914. Traubel died in 1919 (an even one hundred years after Whitman's birth—his last words: “Walt says come on, come on”). It took thirty-four years for the fourth volume to be published, in a preposterously small number of copies, by the University of Pennsylvania Press. This is an all but unobtainable book, and very expensive. Volume 5, edited by Horace’s daughter, Gertrude, was published in 1964 by Southern Illinois University Press. Over the next thirty years, the same press brought out Volumes 6 and 7. Only within the last five years have Volumes 8 and 9 (the last two) been published by W L Bentley Rare Books . . . 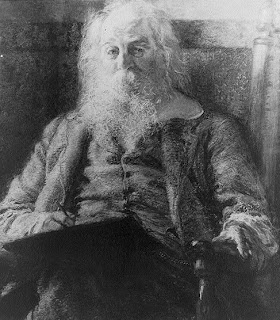