Sorrentino in The Floating Bear 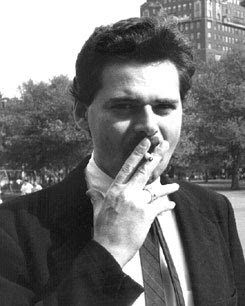 Time-stymied, a bollixed up morning. Here’s a few deft and pointed (refreshingly so) portrayals and assessments out of the pages of The Floating Bear 30 (1964). Gilbert Sorrentino’s brash high speed critical rifling, out of a piece called “Prose of Our Time”:

Kerouac:     Enormously talented, no conception of “philosophy,” when he tries to think in his prose you are redfaced. Sloppy, no working out visible, whole passages suffer enormously because of this breakneck method. Narrative gift best since Defoe, but no better than Defoe. A reaching back 250 years to this technique, no apparent connection with the masters of the 18th century novel, the great innovators and perfecters of the 19th. As if he merely forgot that Flaubert existed, a shallow pickup on Joyce, an ignoring of Ford, Lewis, etc. When the perception as artist matches the energy expended we have him at his best, a lucid, hard prose capable of the most minute detail, a narrative unmatched in our time. When the energy is greater than the perceptions, we have slop, v. Subterraneans. Best piece he ever wrote, October in the Railroad Earth. Worst, Old Angel Midnight, see that for don’ts.

Burroughs:     Clue here is that he is not a writer, he merely writes. Doesn’t care about the overall pattern, if he enjoys writing it, in it goes, Naked Lunch the most dazzling prose of this decade (and last), but not great writing. Thinking shallow and amoral, magnificent construction of comic characters, greatest “funny names” since Rabelais. Style is reminiscent of Nashe, though not consistent, I mean, he can bore the hell out of you. Power is often misdirected, because his greatest hatred, his full venom falls usually into scenes in which the characters are not people. Irritates because he has the arrogance of the addict, viz., “you poor dopes.” Best things in Lunch are Clem and Jody, episode about Bradley the Buyer, the fantasy land near the end of book. If he could cut out and edit, in terms of the work, and not what he likes, he’d be a good writer. Latest “cut up” method merely amusing, old stuff from the transition days, a bore and a fake. In the current Futurism show in town, we find the same sort of thing done as collage, ca. 1915. It didn’t work then, either.

Jones:     Thinks too fast for the words, too many typographical tricks, too many ocular distractions, parentheses, the words speed on, the thought struggles to catch up. Needs a lot of cruel editing, great intelligence, incredible “moving” power, but you don’t want to re-read it. Too much junk in shape of side remarks, off the cuff comments on what has taken place in the narrative placed in the narrative itself. Too many short sentences. A feeling that you’re being, somehow, tricked. Lots of fancy stepping, a great dancer, you feel ungrateful to want to analyze, but he makes you need to. However, a pro, should be fine if he gets tight, and cuts out what is prettiest.

Creeley:     Let your mind slip off the words for a moment and you’re lost. He demands your attention, not so that you can “enjoy” what is happening, but because you must be all there, completely with him to get the story. Every word needed, it doesn’t seem casual, the work that goes into it comes out of it. The greatest master of thorny, pruned syntax ever seen by me. No clichés at all, very few adjectives, metaphors cut to the bone, those that are used really work, not decoration at all. Story of the cat in Three Fate Tales his best, Mister Blue hard behind it. Prose as good as the verse, which is in itself a unique accomplishment. A real writer, an artist of the very highest rank.

Olson:     Solid, declamatory prose, though he, like Pound, expects you to know his subject as well as he does. Many times like notes to himself, you are infuriated that you don’t know what he’s talking about because you didn’t read a certain book. Mayan Letters an incredible record of a brilliant amateur who “sees” more than the professionals in their own field. A great grasp of life, he will not be bought, the Call Me Ishmael a great scholarly mind shot through with intuition rising splendidly to a splendid subject. Every thought in the words as perfect as fingers in a kid glove.

Dawson     No critical eye for his work. Drenched with adjectives and metaphors, to the extent that some stories would cease to exist if the metaphors and adjectives were blue-penciled out, all exists on the surface, things that more him should move you as reader, but fail to, either because he doesn’t know exactly what he wants to say, or he says what he wants to say abstractly. An actor, he wants you to know how he feels via the medium of the story, he doesn’t want the story to let you know anything. Very, very pretty, very accomplished, his great gift is a relentless pursuit of reality, made hyper-real* to the point that it becomes real fiction, unreality. Must learn to edit out the whipped cream.

Dorn:     A great visual writer, a searing anger, a tenderness. His Ed Dorn in Santa Fe the most remarkable “news letter” I have ever read. What I See in the Maximus Poems a great off-beat appraisal of a great poem. The section on what it is to be a Western man clear and uncompromising. What makes the prose so compelling is the casual off-hand air it maintains. Good prose by a good poet, full of intelligence.