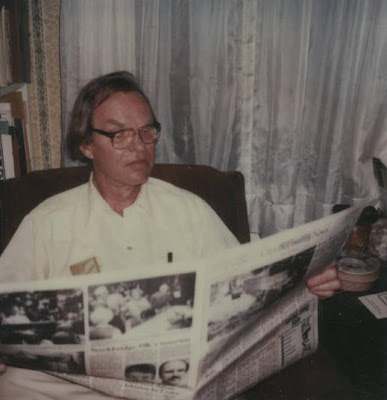 Paul Metcalf, regarding Michel Butor’s 1963 Mobile, A Study for a Representation of the United States, with its dedication to Jackson Pollock:

. . . it is the first full-length prose work I know in which—as in Pound, Williams, Olson—the meanings are stripped of all literary trappings, lying (as pigments) nakedly side by side, the shock of juxtaposition unmitigated.

has Butor read our poets, or did he get it from the painters? In any case, this is a re-emergence of an old tradition of franco-american interchange, one that involved Jefferson, Franklin, Crevecoeur and de Tocqueville . . . it is also in the tradition of that secondary European greed, not the landgrabbers, but those who gathered, at second hand, the land’s natural life: as, Coleridge mining the Bartrams—here, Butor makes a feast of Audubon, picking the birds clean.

And, countering “Jonathan Williams, in a letter,” who’d complained the book “is merely grist,” Metcalf quotes Wright Morris’s The Territory Ahead (1963):

“The mystic meaning proper to objects themselves is the poetry in Whitman. The mere sight of things, a listing of their uses, excites in the American a rudimentary aesthetic. It is not uniquely American, but as Americans we rely on it almost uniquely. After all, what else is there?”

Metcalf adds: “we see this reappearing in PATERSON, the geological analysis of the Passaic riverbed, listing of the sediments, and in MAXIMUS Olson’s fondness for lists of maritime provisions. Here in MOBILE, there is the incessant listing of place names, small and large, from all over our map . . .” Out of the Robert Buckeye-edited From Quarry Road: Uncollected Essays and Reviews of Paul Metcalf (Amandla, 2002). (Metcalf’s own 1979 Zip Odes is “composed entirely of place names, as they appear, state by state, in the U. S. Postal Service Zip Code Directory . . . nothing has been added—there are no ‘filler’ words, or ‘combining’ words.”)

Metcalf’s “Johnny Appleseed” with its making distinct the sedentary (“those who stand within”) and the walker. Buckeye suggests that the piece appeared in “Correction Two, 1968”—though under the title “Johnny Appleseed: 1966” I located it in Clark Coolidge’s Joglars 3:

Everything in this country is so new, by almost any terms, that it is only through history that one gets a fix
and our history—post-columbian—is recent, by comparison with those of antiquity . . . the hailstones on the roof rattle in our ears, for all the insulation and acoustical tile: traditions re-surface . . .

That favorite old fork in the road, the division of melville and whitman, is still apt and dramatic:
an idle guessing game can be played on the question of whether the two ever met: it can be no more than a guessing game, for if they did meet they surely had nothing to say to each other
melville, the last forty years of his life, was a gentleman, meaning that he dissembled (in the one book, moby-dick, he gave the lie to the pose)
whitman was never a gentleman: he walked his whole life fly open

But there are earlier roots:
it was after the revolution that the dispossessed, displaced soldier-farmers, paid off in worthless scrip, struck out: shay’s rebellion
and earlier, there were troubles in massachusetts with uprooted citizens after king philip’s war (1675)
and, too (still earlier), there is roger williams and his difficulties with the authorities in massachusetts bay: and this is important because he walked, repeat walked from massachusetts to rhode island, and this is the special dignifying, characteristic activity of the rebel, the liberal, the beatnik, the naturalist, conservationist and indian-lover: he walks
(still earlier: cabeza de vaca and david ingram)

Perhaps whitman never got beyond his brooklyn ferries but in leaves of grass he strides—in this sense, he was the publicist, front man for a tradition already established:
john chapman, johnny appleseed, whitman’s authentic original: bearded, dedicated, footloose, perhaps a little daft but in cagey defiance of society and its virtues—the original singlehearted beatnik, clearly whitman’s antecedent
chapman, whitman, and in the line of descent, vachel lindsay, joseph smith, george catlin, the two bartrams, and jonathan williams (who walked the appalachian trail . . .

Against these, the conservatives: those who stand within: melville, pound (a line of descent here would please pound not at all, but it can be found) and pound’s satellite eliot; modernly, olson and creeley—pound and olson are perhaps bohemian, but they are nonetheless conservative; the bohemian and the beatnik are different creatures, the former a transatlantic tradition, the latter chapman-whitman resurfacing

History is the measure: ours being the transplantation of foreign seed—appleseed!—in virgin soil: to the conservatives (conservors of value) the emphasis is on the growth and exfoliation of the seed, the culture; to the beat, it is the soil itself that matters; the loss and flourishing of the altogether altered seed becomes secondary—so that the soil, the land, ultimately outweighs the crop in value . . .
it is through the liberal-beatnik that nature comes in: our passion for land and conservation (see roosevelt—ccc, soil conservation, national parks, etc.)—the conservatives are concerned with land and culture, and find nature uninteresting—see olson on nature, as such—and pound on roosevelt
the liberal-beatnik lets in all, there can be no exclusion: god, jew, negro, nature (jonathan williams: “all orifices, orpheus”)—eliot, on the other side, slammed the door on the mississippi, as pound on the jew, olson on extra-newengland (or post-hesiod) u.s.—as melville on all 20th century life (see clarel).

But as surely as the door is slammed, some nut, daft in the head, skips out the window, pocket full of seed, and starts walking—the tradition surfaces and moves anew . . .

(The Roger Williams lines and those regarding the soil’s outweighing the crop appear in “Whitman and Melville” in Where Do You Put the Horse? Too, I note that the final “and moves” is particular to the Joglars version, and lacking in the Buckeye.) The walkers versus the stuck. Marvelous.

Buckeye sporadically quotes bits of Metcalf’s letters. One learns of exchanges with Guy Davenport* (“I’ve not met Davenport, although he writes rich and witty letters, and we correspond joyously. Have you seen his new book, TATLIN!? The Baltimore Sun wrote a review, in which they dismissed him as a sex maniac. I told him not to let such flattery go to his head”), and of Metcalf’s “latest passion: Charles Reznikoff, about whom I intend to write” (“I never realized how close he and I are—see Testimony and Holocaust.”) And there’s this:

I guess what bothers me most about what [the Language poets] do is not what they do, but all that’s left out. Passion, emotion, history, place, human relations, geographical realities, etc. It’s all one electronic abstraction.
Shit, man, no erections.

* Shouldn’t the assembling and putting into print of Davenport’s letters—by all evidence, necessary for an honest measure of the man’s literary work—be one of the pressing demands of the moment?