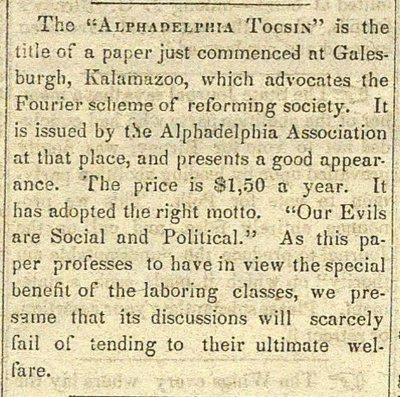 Clipping out of the Signal of Liberty, 16 December 1844

A small geographical and historical excursion* under the obvious tutelage of Metcalf, triggered by Poe’s outburst.

Out of Poe’s Marginalia (Democratic Review 1846):

“The Alphadelphia Tocsin!”—(Phœbus, what a name to fill the sounding trump of future fame!)—is the title of a new journal published at Alphadelphia, Michigan, and “devoted to the interests of the laboring classes!”—by which, I presume, are intended the classes who have to pronounce, every morning, the great appellation of the paper itself. Such a work should not want editors, and accordingly we are informed that it has eight. What on earth is the meaning of Alphadelphia? Is the “Alphadelphia Tocsin” the tocsin of the city of double A’s?—if so, the idea is too easily slipped into A double S.

Out of the Signal of Liberty, an abolitionist newspaper launched in Ann Arbor, Michigan in 1841 by Theodore Foster and the Reverend Guy Beckley, the number dated 8 April 1844:

We learn from the Marshall Statesman that this Association is about commencing operations, notwithstanding a charter was denied them by the Legislature. The first annual meeting lasted five days. More than one thousand persons were received as members. The subscriptions for stock amounted to over $120,000—partly in cash, and partly in live stock, farming utensils, improved real estate, &c. The Association is to operate at present under the limited Partnership Law. The Board of Directors will immediately appraise the domain, which consists of nine square miles, being the south-east quarter of Comstock, Kalamazoo County. One hundred and fifty to two hundred members intend to enter on the Domain immediately. A Fourier paper is to be published soon. Rents are not to exceed the cost of the building, and ten per cent added. Board is to be at its actual cost. Eight hours labor is to be considered a day’s work, and all accounts to be settled at the end of the year.

Out of an early committee report dated 27 December 1843, after a visit to Galesburg in search of land for a domain:

The Kalamazoo River is a large and beautiful stream, nine rods wide and five feet deep in the middle, flowing at the rate of about four miles per hour, and with eight feet fall which can be obtained by digging a race. This will propel a hundred run of millstones in the dryest season.
The mansion and manufactories will stand on a beautiful plain, always dry, from fifty to sixty rods wide, being skirted on the south by a range of hillocks about twenty feet and running parallel with the river. The plain above the hillocks extends for miles, being covered with the most thrifty timber your committee ever beheld, consisting of Whitewood, ash, oak, beech, elm and maple. The hard maple being two to three and a half feet in diameter and some of the black walnut are fourteen feet in diameter.
There is a large spring of purest water about a half a mile distant from the place where our mansion will stand, furnishing water sufficient for drinking and culinary purposes, in all our manufactories and the mansion and supplying, besides, our dairy with fresh water.
Cobblestones are found in sufficient quantity for foundations and building a dam, easily accessible. Beds of clay and sand exist where excellent brick have been made. There are indications of iron ore on the domain and in its vicinity but no investigation has been made. In fact everything that an association can want is found here except gold beds, sandstone and limestone. Nature seems to have destined this precise spot for such an association as we are about to form.

The theory of holding property in common through the operation of a domestic and industrial domain, was tried out in Kalamazoo county following organization of the Alphadelphia Association at Clark’s lake in Jackson county on Dec. 14, 1843. It crumbled after four years . . .
. . . Dr. H. R. Schetterly was the controlling spirit. He was a German–a small, slender man with dark hair and eyes. He won his way into the confidence of the Comstock pioneers. The settlers were interested in the new method of living that he pictured and many were anxious to join . . .
. . . property, though not held in common, caused no envy and created no distinctions. They helped each other not only at raisings, but at clearing off their lands, husking corn and through all their troubles and over all difficulties. Thus when Dr. Schetterly came to the community he found them already “Alphadelphian” . . .
Organization was soon perfected. The Comstock members lived in their own houses and those who came from other points were sheltered in such homes as they could get until a long shanty was built on the north side of the river which was occupied as a general “tabernacle” by the new members until the mansion was erected in the fall of 1844. This building was originally 26 by 200 feet and two stories high.
The first school was taught by James Allen Knight in a log building on the south side of the river. The pupils crossed the river by boat. Philander H. Bowman of Jackson was the physician; James Hoxle, Bellevue, the leading carpenter; Leonard Liscomb was the tailor; G. O. Ball and John Wetherbee, shoemaker. The colony’s paper was called the “Alphadelphian Tocsin,” and was edited by H. R. Shetterly and Rev. Richard Thornton.

Out of the Signal of Liberty, the number dated 16 December 1844:

The “Alphadelphia Tocsin” is the title of a paper just commenced at Galesburgh, Kalamazoo, which advocates the Fourier scheme of reforming society. It is issued by the Alphadelphia Association at that place, and presents a good appearance. The price is $1,50 a year. It has adopted the right motto. “Our Evils are Social and Political.” As this paper professes to have in view the special benefit of the laboring classes, we presume that its discussions will scarcely fail of tending to their ultimate welfare.

Most of our readers are aware that a Fourier Association under this name has been commenced at Galesburg, in this State. The Alphadelphia Tocsin, which is issued by the Association, has a statement of the affairs of the community. The Domain is situated on the Kalamazoo river, and is bounded on the north by the Central Railroad. The water power is represented as valuable, (there being nine feet head and fall) and sufficient to propel a large amount of machinery.
A temporary building has been commenced 591 feet in length. The Association has contained 190 persons, resident on the ground.—But owing to the inconveniences consequent on the want of suitable dwellings, the want of employment for some of the members, the sickness of others, &c. a minority were disposed to turn out the obnoxious families, and we are told that the division of opinion and action on this subject kept the members “in a continual turmoil the whole summer, and several of the principal stockholders predicted a dissolution.” The difficulties have been removed by the withdrawal of the obnoxious families. A few more resident families can be received in the Spring, provided they bring some cash with them. The future prospects of the Association are favorably represented.

A poem, unsigned, out of the same issue:

Two or three girls, and two or three boys,
Dirty and ragged and making a noise;
Some calling for this and others for that;
One punching the dog—another the cat;
And Bill, the sly rogue, with a sorrowful phiz,
Bawled out that ‘Sam’s bread had more butter than his!’
And then the sly urchin, all covered with grease,
Sitting down on the hearth to examine each piece!
And if one is the widest, or thickest, or longest,
Let him that’s the weakest, beware of the strongest;
A battle ensues, and a terrible clatter;
The mother cries out, what the mischief’s the matter!
Each tells his own story and tries to defend it:
“It won’t do, you young rogue, a boxed ear must end it!”

It is he who said about socialism at a time when the latter did not yet have a name, or when, at least, this name was not completely popularized: “The world is infested, just now, by a new sect of philosophers, who have not yet suspected themselves of forming a sect, and who, consequently, have adopted no name. They are the Believers in everything Odd. Their High Priest, in the East, is Charles Fourier—in the West, Horace Greeley, and high priests they are to some purpose. The only common bond among the sect, is Credulity:—let us call it Insanity at once, and be done with it. Ask any one of them why he believes this or that, and, if he be conscientious, (ignorant people usually are,) he will make you very much such a reply as Talleyrand made when asked why he believed in the Bible. ‘I believe in it first,’ said he, ‘because I am Bishop of Autun; and, secondly, because I know nothing about it at all.’ What these philosophers call ‘argument,’ is a way they have ‘de nier ce qui est et d’expliquer ce qui n’est pas.’”

. . . more important than anything else: we shall see that this author, product of a century infatuated with itself, child of a nation more infatuated with itself than all others, has clearly seen, has imperturbably affirmed the natural wickedness of man. There is in man, he says, a mysterious force which modern philosophy does not wish to take into consideration; nevertheless, without this nameless force, without this primordial bent, a host of human actions will remain unexplained, inexplicable. These actions are attractive because they are bad, dangerous; they possess the fascination of the abyss. This primitive, irresistible force is natural Perversity, which makes man constantly and simultaneously a murderer and a suicide, an assassin and a hangman.

Out of the “Introduction” to Baudelaire on Poe: Critical Papers, translated and edited by Lois and Francis E. Hyslop, Jr. (1952):

Translations of individual stories by Poe began to appear in France almost immediately after the publication of the Wiley and Putnam edition of his work in 1845. The Gold Bug appeared that same year in the Revue Britannique, a magazine which drew most of its rather varied material from British and American sources. Baudelaire's interest was first stimulated by several translations which Mme. Isabelle Meunier, an English girl and the wife of Victor Meunier, published in the socialist paper Démocratie Pacifique. The Black Cat, published January 27, 1847, was the first in this series.
It is interesting to note that Victor Meunier, a disciple of the socialist philosopher Fourier, was instrumental in having his wife’s translations were influential in persuading Baudelaire to renounce his socialist ideas and to adopt an anti-democratic attitude . . .”

Out of Poe’s Marginalia (Democratic Review 1844):

A newspaper called “The Primitive Expounder” was also published at Alphadelphia for a period. Of the “Alphadelphia Tocsin,” apparently a single copy exists—in the Bentley Historical Library at the University of Michigan—a number dated 6 December 1844.

Or, better, raw material for a small geographical and historical excursion, &c. Assembled as is, the thing proceeds somewhat sluggishly (“events are our sole means of appreciating time”) . . .