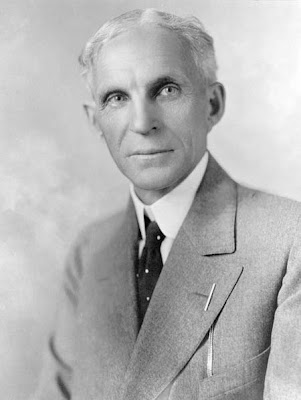 Up at five, the sky covered with flocculent clouds, plum-colored. Reading Metcalf’s Patagoni (1971) under a thin rinse of light. With its Heraclitean Henry Ford:

“Everything is in flux, and was meant to be. Life flows.”

there was this thing he had about water: the love of old water powered mills, the fixing of factories and assembly plants by rivers, for power, the placing of freight on ships rather than RRs

he hated history: “The water that is up the river, and the water now going over the wheel, are of more importance to youngsters than water that already has gone out to sea.”

books “mussed up his mind” and “Reading can become a dope habit . . . Booksickness is a modern ailment.”

had no fixed corporate structure, no titles (the men in his research labs had desks but no chairs)—preferred, instead, a fluid structure, executives with no defined responsibilities, competing, warring with one another, the organization kinetic, life and factory an assembly line, moving, an amazon, mainflow and effluents

“Life is a going concern”

Ford thoroughly American (Metcalf, in a review of Guy Davenport: “We Americans . . . tend to thread our mysteries like a string of beads . . . the gimmicks extended on the naked scaffolding and careless texture of the meretricious . . . the particles chiseled, carved out, isolate . . .”) Assembly line style (Patagoni):

Etc. A chiseled-edge poetry straight out of Horace Lucian Arnold and Fay Leone Faurote’s Ford Methods and the Ford Shops (1915). Chapter III. “How the Work Is Done”—“Gaging and inspection. Making the pressed-steel crank box; thirteen preliminary and sixty-two supplementary operations described in detail. Output and costs. Brazing operations, showing original apparatus and methods. An introduction to the practice of ‘moving assembly’. . .” Metcalf, talking about the “unquestionably American” Charles Ives and Guy Davenport (Davenport’s 1966 Flowers & Leaves is dedicated to Ives):

As Americans, the latter two are brittle, i.e., they tend to separate, to isolate, to string out their concepts, rather than comfortably integrate them in the assured European manner. In so doing, they deny themselves the heaviness that audiences and readers find reassuring . . . but the stringing out is part of the American process, of searching, of a new country still forming, of avoiding heavy masses, of keeping doors and windows open.
I maintain that it makes no difference what materials are used . . . it is the way of working, it is the way of working, the structure, the “trace in the mind,” that certifies these distinctions.

(Brittle: out of the Old English verb britten, to deal out, apportion, distribute, dispense. Kin to Old Icelandic brotna, to burst, break. See, too, the Old English brytta, one who bestows gifts.)

Metcalf: “The American dynamic . . . is the separation and exposure of the particles, spread out and shaping, all in one difficult process, seemingly contradictory but not so, and not to be easily congealed in the European manner . . . not brought together, but spreading and shaping in one gesture . . .” So Davenport (who had only contempt for Ford’s own assembled product—“It is useful in talking about the automobile to think of it as a creature, like Samuel Butler’s Erewhonians who saw machines evolving at a much faster rate than animals . . . and solved their rivalry by revolting against them. Butler was right. The automobile is a bionic roach. It eats cities. Another principle m operation with the automobile was discerned by Diogenes in the fifth century B.C.: namely, that a man who owns a lion is also owned by a lion . . .”)—in Flowers & Leaves:

This civilization of nymphs like trees in flower,
These figures in blue wool and gold wire,
How long can we imagine their eloquence
Beside Charles Sheeler’s locomotives, for hunters under
Acorn ceilings, Giuliano once, leaf hat, flowered coat,
L’éphèbe en blue jeans astride bicylindrical fire,
Birmingham Small Arms cycle climbing the pit wall,
The mind easily Geometric Period infantry corporal,
The heart voiceless, inept, as free of the body
And its leopard engine as music from instruments;
The sincerity of carburetors, the insolence of cats.

Rejecting what Metcalf calls the “congealed” European manner (“their eloquence”). To proceed like the motorcyclist, inept and free, insolent and sincere. “To Haydn and Charles Ives, to the steel plosives / Of the motorcycle, to the silence of the apples, / Word on word folded, as the wind folds leaves . . .”