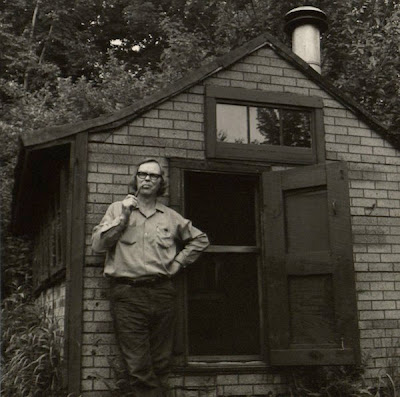 Friday, the duffer’s day. Out of the “Cocoanut Indians” part of Apalache (1976), the splice of renderings of the Great Swamp Fight of King Philip’s War (wherein, in late 1675, Josiah Winslow led a force of a thousand or so colonists against Narragansetts holed up in a swamp-bound fort) with contemporary reports of Cocoanut Grove nightclub fire of 28 November 1942—nothing so taut, its tempo so impeccably wrought, in all of Metcalf’s work:

“It ſeems that there was but one Entrance into the Fort, though the Enemy found many Ways to come out; but neither the Engliſh nor their Guide well knew on which Side the Entrance lay, nor was it eaſie to have made another; wherefore the good Providence of Almighty God is the more to be acknowledged, who as he led Iſrael ſometime by the Pillar of Fire, and the Cloud of his Preſence a right Way through the Wilderneſs; ſo did he now direct our Forces upon that Side of the Fort, into which the Indians that firſt fired upon them betook themſelves.”

13 steps to the head of the stairs, 12 feet to the right, and 28 feet through the Foyer to the revolving door: smoke puffed and eddied around the corners, followed by a dart of flame followed by a rush of flames and fugitives
two men reached the door, landed in the same wedge, jammed it

“The Place where the Indians uſed ordinarily to enter themſelves, was over a long Tree, upon a Place of Water, where but one Man could enter at a time, and which was ſo waylaid that they would have been cut off that had ventured there”

at the head of the stairs was another door, a panic door, opening to Piedmont Street—welded shut against a possible exodus of deadbeats

“But at one corner there was a Gap made up only with a long Tree, about four or five feet from the Ground, over which Men might eaſily paſs”

the revolving door didn’t revolve, the crowd surged, one man smashed the glass, another tried vainly to free his arms to put out the fire in his hair

“But they had placed a Kind of Block-houſe right over againſt the ſaid Tree, from whence they ſorely galled our Men that firſt entred; ſome going ſhot dead upon the Tree, as Capt. Johnson, and ſome as ſoon as they entred, as was Capt. Davenport”

the cables snapped, the door spun fugitives, cut, bleeding and burned, to the sidewalk

“ſo as they that firſt entred were forced preſently to retire and fall upon their Bellies till the Fury of the Enemies ſhot was pretty well ſpent, which ſome Companies that did not diſcern the Danger, not observing, left ſundry of their Men”

a Grove employee threw up his arms: “Nobody gets out of here till he pays the check!”

“but at the laſt, two Companies being brought up besides the four that firſt marched up, they animated one another to make another Aſſault, one of the Commanders crying out, They run, they run; which did ſo encourage the Soldiers, that they preſently entred amain”

half-burned gases arched into the vaulted Foyer, sucked forward by a fan over the Caricature Bar, and into the spaces of the Dining Room
a waiter shouted “Fire!” and the word was heard as “Fight!”—a busboy on the Terrace saw a flash of light, thought gangsters were shooting up the joint
black smoke, a rosy tongue along the ceiling, a blast, a ball of flame
a group in the Villa made for the double doors opening to Shawmut Street—found them bolted
the lights went out, many fell to the floor and slept, breathing the sweet noxious gases
others hurled tables, chairs

“After a conſiderable Number were well entred, they preſently beat the Enemy out of a Flanker on the left Hand, which did a little ſhelter our Men from the Enemies Shot till more Company came up, and ſo by degrees made up higher, firſt into the Middle, and then into the upper End of the Fort, till at laſt they made the Enemy all retire from their Sconces and fortified Places, leaving Multitudes of their dead Bodies upon the Place.”

“And by this time the English people in the fort had begun to set fire to wigwams and houses in the fort, which Mr. Church laboured hard to prevent. They told him that they had orders from the General to burn them. He begged them to forbear until he had discourse with the General. And hastening to him, he begged to spare the wigwams, &c., in the fort from fire. And told him that the wigwams were musket proof, being all lined with baskets and tubs of grain, and other provisions, sufficient to supply the whole army until the spring of the year, and every wounded man might have a good warm house to lodge in, who otherwise would necessarily perish with the storms and cold; and moreover that the army had no other provisions to trust unto or depend upon; that he knew that the Plymouth forces had not so much as one biscake left, for he had seen their last dealt out, &c.”
but the wigwams were fired
“in the which men, women and Children (no man knoweth how many hundreds of them) were burnt to death”
“by the firing of at least five or ſix hundred of thofe smoaky Cells”

from the point of origin to the top of the stairway, 43 feet, the fire spread in two to four minutes; down the 40-foot Foyer in seconds, and from the stairway to the New Lounge doorway on Broadway, 225 feet, five minutes at most
“within two to five minutes of the first appearance of the fire most of the possible exits, including all exits normally open to the public, were useless. Pouring fire through such exits made it impossible for humans to pass simultaneously through these exits safely. In the course of such pouring, the mass of burning gaseous material appears to have been depressed from its high elevation within the premises in order to pass through the exits. The finding of bodies piled up at many of the exits is attributable to this fact.”

“the shrieks and cries of the women and children, the yelling of the warriors, exhibited a most horrible and appalling scene, so that it greatly moved some of the soldiers.They were in much doubt and they afterwards seriously inquired whether burning their enemies alive could be consistent with humanity and the benevolent principle of the gospel”

(A lovely story Metcalf tells about the original printing of Apalache by Bob Callahan of Turtle Island, who’d got Clifford Burke to do the typesetting: “. . . and there began a marvelous transcontinental correspondence—between Bob and me, me and Cliff Burke, the printer—as the book slowly came into existence. Before setting type, Cliff demanded that I make a tape recording of the entire book, so that he could gather my intentions as to layout from the way I spoke it.”)

Out of a Metcalf piece called “In This Corner: Charles Olson” in The Floating Bear (1962):

All of us, it seems to me, are fighting Time. A few win. Melville poured and swept around her, beat her at her own game. Thoreau withdrew to Walden, refused to win the goddamn clock. Wright Morris (read THE HUGE SEASON) lined her up on two levels and let go with both barrels (pretty sneaky, but it works). George Catlin walked her to death (Space, that American dimension of Time). And so on.

Kid Paret already had the Cadillac Eldorado and the Thunderbird, had planned to retire after just one more fight. But the capillaries in the brain case burst . . .

Down in Gloucester, Charles may have watched the fight. Probably not.

the remnant, holed up.

Isn’t the duffer’s work just that: a refusal “to win the goddamn clock”?