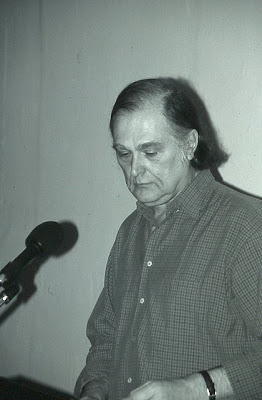 as a slow accumula striped mirror
not so simple. Toon the shoulder
insatiable of light singing
skin-tight for his proud flesh
Forthright.     eating eggs
Read Dante with a vast gap
we tossed coins & fat ox too even
is monument to is that in the West
I said:         each high tide
Heads up to the teaching of
the sky is again mouth to mouth
to die. I turned turning       how to
subtly impish & you would be
he & the other of one color
“What will I do with pressures of
lightning over all cigarette &
Including Turban this last year
My mother saw him the coldness of
when itchy mustache I am a child of
with little black in the corner by
dirtiness L E F T     just that place
jewels innocent haunting the mist
counterfeited in When you’re tired
T H E Y  S A Y         Circa anytime
hunting deer in what doesn’t the
died at his child then at the throat
they do strike on dismemberment even
across in the field tasting its strut
commonplace, as for the enlightened
season out of sin the course of
I’ll slip away be in a green flame
off in Wisconsin thru dark
men in sand wading pay me off, savages
& tongues         A boar might get
hand to hand     2nd the care of
there are bodies   Time to break ear
field of grass, with reverence &
bright descending without image
We eat ourselves limited supply of

Typing, I think rather helplessly (and to no discerned end) of Eliot’s “Ash Wednesday”—its “Because I do not hope to turn again . . . Because I do not hope to turn” bubbling ineluctably up out of Coolidge’s “I turned turning . . .” (and henceforth “descending without image”—only the merest tracery of its temporary adhesion left . . .) Or I think of O’Hara’s “Day and Night in 1952”—how it begins “Be not obedient of the excellent, do not prize the silly with an exceptionally pushy person or orphan. The ancient world knew these things and I am unable to convey as well as those poets the simplicity of things, the bland and amused stare of garages and banks . . .” and slides into a series of percussive “of”s:

. . . Do you occasionally wonder at the inscrutable nature of visual experiences, an undeniable and far from optometrical
distance? the bane and bolster of
my primping prissy heart’s bane of
anguish! the pressure wheel stone of
desire. I do not want to be victim of
the ability to enthuse myself at or of
. . .
my thoughts are blue with miles of
figures and chariots and nudes on paths of
primrose, going down the drain of
modern times like a rhymed heroic tragedienne of
patsies and opening nights and visions of
the madame who cares and knows not what of.

“The bland and amused stare of garages and banks”: isn’t Coolidge’s attempt that of recording the bland and amused stares of the word garage, of the word bank? Barrett Watten reported somewhere—no doubt in The Grand Piano morass—how he spent some days and weeks making numerous photographs of the bland stares of semi-urban garages (to what end, nobody recalls). Watten, too: tempted by the stares bland and, knowing Watten, unamused of what is “unconcerned with human affairs . . .” (O’Hara). Isn’t—I think, rereading the piece—O’Hara adorning several lines of “A Little Magazine History”? There’s Coolidge’s “when itchy mustache I am a child of / with little black in the corner by / dirtiness” summoning up O’Hara’s “Autobiographia Literaria” (“When I was a child / I played by myself in a / corner of the schoolyard . . .”), though I initially think unreasonably of “I have never clogged myself with the praises of pastoral life, nor with nostalgia for an innocent past of perverted acts in pastures” (“Meditations in an Emergency”)—or its precursor “O pastures dotted with excremental discs, wheeling in interplanetary green, your brown eyes stare down our innocence. . .” (“Oranges: 12 Pastorals”)—and of “Song” (“Is it dirty / does it look dirty / that’s what you think of in the city . . .”) Coolidge’s lines “I’ll slip away be in a green flame / off in Wisconsin thru dark / men in sand wading pay me off, savages / & tongues” register a kind of O’Haraesque homage to what’s dark, or wild. (O’Hara, in “Anxiety”: “If I could / get really dark, richly dark, like / being drunk, that’s the best that’s / open as a field.”) I think, too, of O’Hara’s “Indian / sleeping on a scalp . . . just caught sight of the Niña, the Pinta and the Santa Maria . . .” in “In Memory of My Feelings.”

Is Coolidge here in 1966 still stripping off syntax? And syntax’s roistering guilt? Paul Metcalf, writing in a letter to Coolidge (c. 1977): “In many ways, your language is free of guilt. Guilt by association. Association is guilt. Language = meaning = nostalgia = guilt.” And: “I’m suspicious of freedom. And I think you are equally so. The freedoms which you have long since attained, in your vigorous experimenting, are not wholly satisfying, to you (I personally think that what is lost is history—but, call it what you will, something is missing.) And, of perceived (made) structures (“there is nothing casual about your techniques . . . it is a studied piece of workmanship”), Metcalf admits he sees such “distantly”: “Distantly, because I am not drawn in emotionally [. . .] The distance—because you don’t want that closeness? Am I realizing now what a terribly intimate thing is history? (like lying with one’s sister?) You wish words as particles, as counters, washed of associative glue?” Metcalf’s “list of commonly repeated words”: “deign / clad / dial / close / pass / per / single / twin / tend / loom . . . these, plus articles and prepositions—almost all of them are monosyllables—seem to get the strong beat . . . the polysyllables are used as connectors . . . like drums, yes?”