Works and Days of the Fénéon Collective 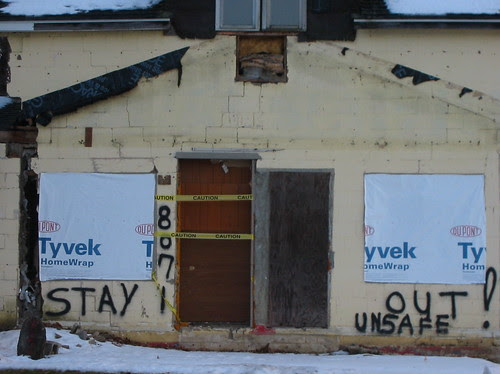 Ah, the enigmatic and impenetrable Félix Fénéon (1861-1944), indict’d for anarchism in the infamous Trial of the Thirty, tall, thin, with a goat’s beard and the look of ‘an American Mephistopheles’ (according to Remy de Gourmont), comrade of the lobster-walking Alfred Jarry (who label’d him—in the 1898 Petit Almanach—“Impetuous Keeper of the Peace”), a man whose writings Mallarmé himself call’d “detonators”: how perfect that a spunky bunch of provocateurs, cross with the compleatly innocuous and superficial detritus la poesía norteamericana (et britannique)’s become under the post-equals sign “turn to careerism”—like so much sodden potting vermiculite in the rich lingual compost, like so much damp excelsior surrounding the green jade bibelot—’d lay so brilliantly ahold of the man who remark’d—regarding a proposal for a collect’d works: “I aspire only to silence.” Fénéon of the faits-divers—minuscule police blotter column fillers translated by Luc Sante in Novels in Three Lines (NYRB, 2007)—and of the lesser known belles-lettres:

laforgue (Jules). A plump and beardless youth. Sings to the moon: insidious amoral laments, incantatory litanies. This Selenite is reader to the Empress Augusta. Oh, the agonies of that good lady, if he should read her his poems!
taine (Hippolyte). Applies to literary history the techniques of scientific farming. For any given country, studies soil chemistry, topography, and climate, then treats a generation of artists as a crop of mushrooms, beets, and Brussels sprouts.*

So the Fénéon Collective, a splinter’d sub rosa group whose documents (and members) seem to come and go like the mediaeval humours. Initial evidence of the Collective’s emergence out of the (usual, humdrum) precincts of the spurious: the damnably apt “founding manifesto” (dated October 2008). Sadly, only a single sentence survives: “The abolition and the realization of poetry are inseparable aspects of a single transcendence of poetry.”** That captured by a Fénéoniste going by the nom de plume / guerre of “Anonyme” in the curio of a book “printed in simple type on old brown paper / feminine marvelous and tough”—Works and Days of the Fénéon Collective (Skanky / Effing, 2010).***

“Anonyme” provides a (possibly slant’d, undoubtedly vainglorious) introduction: see the lines about how “the group’s four original members . . . communicated to me that they . . . admired my work . . . After some correspondence, they extended an invitation that I join their secret cell. Impressed by their smarts and willingness to grate against the well-varnished grain, I agreed.”) Several pages of infighting tussles (between “Authentic Tendency” and “Unified Body”) ensue, with little in the way of evidence (apparent food poisoning of an “Authentic Tendency” member in the UK by “gesture of reconciliation”-offer’d “box of dried apricots” doth not a shred of evidence make) as to who exactly is behind the devilish writings. For, particularly, and bravely, what “Anonyme” offers is 232 collect’d faits divers focus’d on “the accidents, murders, suicides, labor disputes, and banal contretemps” of early 21st century poetry communities, American and British, items “fanciful, loquacious, and didactically satirical.”**** Satire, most malign’d and most difficult of the arts. There is (I sense) a dull roaring rhubarb brewing now “in the field”—the gather’d throngs of poets shouting “Allez-y, alors” and “To the texts!” (meaning, sans doute, “Did you see any mention of my name?”) It’s as if—good petit-bourgeois style—one measures one’s arrival only by the contempt and mockery one’s elicit’d in the public square. Truth is, there’s a whiff of the museum to the Works and Days (it’s part of its extraordinary brilliance): how fleetly the news item dates! Who recalls the street-fighting commandoes of Flarf today, beyond the inveterate (dogged) surveyor of footnotes, and footnotes to footnotes? Who recalls Gaza burning? The Collective:

¶ Well, Guernica’s come and go . . . As Gaza burned, Mlle Dark, the self-appointed U S. poetry medium of Badiou, devoted her blog to a personal “Top 40 Countdown” of pop music hits in 2008.

¶ Yes, and as Gaza burned, the avant with 2,000,000 hits, former editor of the Socialist Review, devoted his blog today to an anecdotal homage for the ’70s sitcom hit, Starsky and Hutch.

¶ Poets have a hard time sitting still! M. Bonney ran at full speed towards Mme Bergvall, who ran in same manner towards the other. Bobbies, with tall rounded hats, are investigating the odd rash of seizure-like collisions within the poetic field.

Another: the essential infantilism of the academic world, with its endless rounds of self-promoting and entirely insular conferences:

¶ Wearing felt party antlers, made by kids in Pakistan, one hundred and fifty-seven poets and critics hopped forward in the Potato Sack Race, marking the close of the “Poetry of the ’70s” conference, in Orono. The winner: Mme Howe, by a hair.

¶ A nervous graduate student addressed the Professor: “How is Language poetry really radical, etc. when it’s now the most academically-dependent formation since the New Criticism?” Down rushed M. Perelman from the dais, biting off the little rat’s ear.

Along with institutional mockery (see a sweepstakes-winner like “¶ The avant-garde has come so far. Signed by M. Filreis, the invitation to the Penn Writers House AWP soiree (held at a mansion on Lake Shore Drive, Chicago) promises “hors d’œuvres, cocktails, and literary conversation in the manner of a Salon”), untoward individual hubris—and the dogged defenders of personal lineage (see a report of M. Sutherland jumping into “the filthy Thames” only to be “rescued by the heroic M. Prynne, an engineer”)—gets its due comeuppance, too. There’s the lucky hustler in a prize-infest’d landscape bestrewn with lucky hustlers—

¶ Some things do get rather loud: Nineteen times running, an experimental poet’s bio has announced to readers that “He is author of the book Novel Pictorial Noise (selected by John Ashbery for the National Poetry Series).”

—and there’s the wholly ersatz “genius” of little means—

¶ “Ouch!” cried the cunning oyster-eater, M. Goldsmith. “A pearl!” Someone at the next table bought it for 100 francs. It had cost 10 centimes at the dime store.

There are, too, some acts of homage—quaint and unbelittling—for a few the Fénéon Collective deigns to honor.***** Here’s one:

¶ From La Paz, to Sarajevo, Xian, Montevideo, Tripoli, Berlin, Ljubljana, Santiago, and Cuernavaca, the poet-geologist M. Gander has trekked. Here he is, now, in the Mojave, nigh a cactus, with a sack of rocks on his back. Snakebite.

One’d happily quote the whole book. If there’s a seizable point to the faits divers—beyond the widely-applicable “zero de conduite” grade earn’d by the whole “field”—or an (unfashionable, didactic) lesson to be learn’d out of Works and Days, maybe it’s here, in one of the few clues to the Fénéon Collective’s untroubledly anonymous and sub sigillo make-up:

¶ “To you we proclaim,” cried Mlle E. of the “fénéon collective” to the Court, “Poets have hitherto only interpreted the poetic in various ways; the point is to transcend the very idea of the Poet!” Twenty years exile; prohibition of works from post-avant curricula . . .

Lifting the “banal (and humorous) contretemps”—of vain gracelessness and lost integrity, of xenophobia and turf-for-careerists schemes, of networking hubs and the pseudo-transgressive itch publicly scratch’d (“These days, poets will do anything for attention”)—up to examine the nature of the beast. All of us beasts.

* Translated by Edward Morris. Found in the Evergreen Review’s 1960 “What Is ’Pataphysics?” issue, edit’d by Roger Shattuck. According to the succinct Père Ubu: “’Pataphysics is a brand of science we have invented and for which a crying need is generally experienced.”

** Too, there is, at the now abandon’d scene, so to say, of the original massacre of soi-disant innocents and running dogs alike, “Faits Divers de la Poésie Américaine et Britannique,” one other remarkably prescient rhetorical caw out of that founding document: “Satirical impulse the thesis: analytical desire the anti-thesis: the ironic fire of our faits divers the syntheses . . . Let the field of poetic production tremble!” How poignant that small band of “followers” left behind . . . like a swarm of gnats trying to pursue a shooting star!

*** To order a copy of Works and Days of the Fénéon Collective, contact Dale Smith, at possumego@gmail.com.

**** Works and Days of the Fénéon Collective is, in the words of “Anonyme,” “decidedly ‘unauthorized’” and is publish’d “under threat of legal action.” Ah, the courts, refuge of the mediocre, the proprietary, the lost. Two skew lines, the legal and the poetic, incontravenable each to each.

***** Full, comme on dit (attempting to quash one’s vanity, or cache it with what is, finally, only an “accentuating” thong), disclosure: there is a rather sweet mention of one “M. Latta” in Works and Days:

¶ The poet M. Latta has departed today, on the boat from Le Havre to New York. Many knew he was leaving, though most feigned, carefully, to not observe. The horn blew thrice. Tall, gaunt, and dark, he stood serenely, like a figurehead, at the bow.

Perfect, except for the hump’d back. 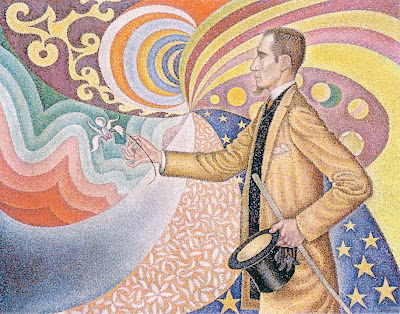