Mist and listlessness. “Empty verbalism.” A sentence obliquely jabbing—remnant of some other life: “The taiga blows its green breath through all the cracks in the city, like an animal’s snout under a door.” (Julien Gracq). My Russian summers, Lake Baikal with a pup tent, the constant whine of distant chainsaws. Practice allowing the sentence-ry to lash out like a whip and—with a sumptuous pop— gingerly pluck off some flower of its liking. Combine Edgar Degas’s odd Antaeus-like command, “to train oneself to a trellis” (se mettre en espalier—“Pour produire de bons fruits, il faut se mettre en espalier”), that root’d earthly insistence (recall that the indefatigable Antaeus, lift’d off the earth, lost all strength) with a Protean breeziness, snatch and go. Scent of black muck and sweet fern, a green darner still’d mid-flight. What one loves is precisely that “mangled, smutted semi-world hacked out / Of dirt” (Stevens)—what renegade unsummon’d memory makes (making a boreal forest in Russia out of the jackpines and birches of northern Michigan). Pound:

proide ov his oy-ee
as indeed he had, and perdurable

Pound’s childlike glee in simple mimicry (Yeats composing at Stone Cottage, c. 1913). Revivifying memory’s scroll unroll’d—“Kakemono” (hanging scroll). “Wind in the chimney” like “an animal’s snout under a door.” The way voice unlatch’d, its repeatable itinerary, becomes (makes comely, befits) graceless memory, that tough alloy unallay’d by calamity, “perdurable” (a word consider’d obsolete by Samuel Johnson). The “aere perennius” (out of Horace, Exegi monumentum aere perennius = “I erect’d a monument more lasting than bronze”) Barthes (Writing Degree Zero, “Is There Any Poetic Writing”), arguing against “duration” in “classical thought” (“in classical art, a ready-made thought generates an utterance which ‘expresses’ or ‘translates’ it”):

In modern poetics, on the contrary, words produce a kind of formal continuum from which there gradually emanates an intellectual or emotional density which would have been impossible without them; speech is then the solidified time of a more spiritual gestation, during which the “thought” is prepared, installed little by little by the contingency of words. This verbal luck, which will bring down the ripe fruit of a meaning, presupposes therefore a poetic time which is no longer that of a “fabrication” but that of a possible adventure, the meeting point of a sign and intention.

Sounds like Pound’s definition (out of the 1918 piece, “A Few Don’ts”) of an “image” ’s being “that which presents an intellectual and emotional complex in an instant of time.” Ah, the fruit-obsess’d French. The globular whole grasp’d. Here’s the sun cutting its blind eye through the crouch of clouds. Pound:

Out of dark thou, Father Helios, leadest,
but the mind as Ixion, unstill, ever turning. 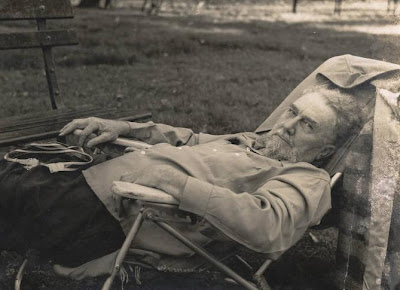