“The Permutations of Nature”

William Frederick Mayers, in 1874 (out of The Chinese Reader’s Manual: A Handbook of Biographical, Historical, Mythological, and General Literary Reference):

Ts’ang Hieh . . . the recorder-sovereign. Reputed as the inventor of the art of writing, in the mythical period of antiquity. According to certain legendary writers, he reigned as Emperor in succession to Fuh-hi (28th century B.C.), and having ascended a mountain overlooking the river Loh, he was presented by a supernatural being in the shape of a tortoise, rising from the waters, with a view of the mysterious tracings upon its back, whence he was enable d to “lay bare the permutations of nature and to devise a system of written records.” Other fables represent him as having been a Minister under Hwang Ti, distinguished by possessing four eyes and the countenance of a dragon. He is said to have elaborated the art of forming written characters by imitating the foot-prints of birds, upon which achievement being accomplished, according to an ancient mystical treatise, “Heaven caused showers of grain to descend from on high; the disembodied spirits wept in the darkness; and the dragons withdrew themselves from sight. Before this divine invention took place, the only method of recording events and governmental ordinances was by means of “knotted cords” (as stated in the commentary of Confucius upon the Yih King).

Paul Carus, in 1907 (out of Chinese Thought: An Exposition of the Main Characteristic Features of the Chinese World-Conception):

The invention of writing in the proper sense of the word is credited to Ts’ang Hieh, also called Shih ’Huang, the “Record Sovereign” because he is the protector and patron saint of history and archival documents. He is said to have lived in the twenty-eighth century B. C., and having ascended a mountain overlooking the river Loh, he saw a divine tortoise rising from the water. It exhibited on its back mysterious tracings of letters which “lay bare the permutations of nature to devise a system of written records,”—a report which imputes that he saw the characters of the five elements on the tortoise’s back.

C. J. Ball (Chinese and Sumerian, 1913) records the inventor’s being Fuh-hi (similar, he says, to the Sumerian fire-god Bil-Gi or Bal-Gi): “One day a ‘Dragon-horse’ rose at his feet from the waters of the Yellow River, and presented to his gaze a scroll upon its back inscribed with mystic diagrams. From these, and from the movements of the heavenly bodies, he devised the system of written characters.” Ts’ang-hieh (“a minister” to the “third successor of Fuh-hi”) comes into the story late:

Ts’ang-hieh elaborated the art of forming written characters by imitating the footprints of birds on the sand; upon which basis he produced five hundred and forty characters. Other accounts are that Ts’ang-hieh first conceived the idea of forming characters from observing the appearance of a certain constellation, the marks on the shell of a tortoise, and the print of a horse’s foot; or that, having ascended a mountain overlooking the river Loh, he beheld a mysterious tortoise rising out of the waters and displaying the marks on its back, which enabled him to “lay bare the permutations of nature, and to devise a system of written records.”

Grrrmph. In a piece call’d “Pound’s Quest for Confucian Ideals” by Hong Sun, out of the Zhaoming Qian-edit’d Ezra Pound & China (2003), a book of pieces originally present’d at a 1999 Pound conference in Beijing, a footnote reads “Cang Jie is believed to have lived in 2800 b.c. Mythology has it that one day, as he ascended a mountain overlooking the Luo River, he saw a tortoise rising out of the water. Cang Jie, born with four eyes, caught all the details of the tracings on its back. Inspired by these tracings that ‘lay bare the permutations of nature,’ he invented the Chinese character.” One is refer’d to Paul Carus’s Chinese Thought. It is there (rummaging, snooping) that my grrrmph-making random begins. Whence cometh that lovely line: “lay bare the permutations of nature”? William Frederick Mayers quotes it, sourcelessly. Scholarly runaround. Writing being the rather unremarkable thing of endless rewriting. Pound (note that Pound writes, too, siphoning off one “Lord Coke” quote out of “Tucker’s edition of Blackstone’s Commentaries”: “The books of a scholar, his countenance (wainagium) that of a villein”—wainagium related to wainage, carts and implements—one thinks of a defensive circling of wagons) in Canto LXXXVII:

“And even I can remember
“A day when the historians left blanks in their writings,
“I mean, for things they didn’t know,
“But that time seems to be passing. . . .” 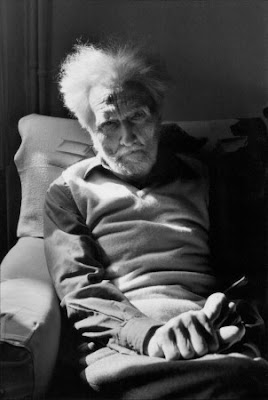