Sheer impetus versus the dalliant heft of stasis: bulk glum. There’s a moment, commencing, when what one cottons to is out there in the flux—Harry Mathews’s The New Tourism vying with Julien Gracq’s bête noire Valéry—and the recent memory of crows aimlessly sailing through the sfumato’d aerie of morning, its smutch-work clouds, sapping all oomph. One slips undamp’d against a tensile dent—razor blade caught by mere watery surface—waiting a sexual wait. (Gracq: “A writer’s almost carnal weakness for words . . . their corpulence or stature, the weight of round fruits falling one by one from the tree . . . When I started writing, what I wanted first and foremost was the vibratory quiver, the violin bow over the imagination. Later, much later, I often preferred the succulence of compact words, rich in dentals and fricatives, that the ear could snatch one by one, like a dog catching pieces of raw meat . . .”) The lolling caress versus the rut abrupt. Harry Mathews:

Eight quarter-pound sticks of sweet butter are pressed
into a two-quart double boiler or bain-marie
that is brought to a boil and kept simmering
while the butter softens slowly into a muddled yellowish soup
that gradually separates on three levels: floating at the top,
a layer of foamy casein; a residuum of casein settling
on the bottom; and between them a depth
of clear oil of butter. When these strata are stable,
the flame is extinguished and the upper pot
removed slowly and surely to a counter where it rests
until the casein layers have steadied. The froth
is then skimmed off with a spoon or tea strainer,
and with surpassing gentleness the butter oil is poured
into a jar. The operation may need to be performed
more than once to keep the underlying casein
from slithering over the rim of the pot while one salvages
every possible drop of oil, which afterwards—except
for what is of immediate use—is sealed in its container
and refrigerated. This perfect cooking butter
will not turn rancid and, heated to high temperatures,
never brown or burn: it is the word “blessing” clarified.

Being the sixth and final part of “Butter and Eggs: A Didactic Poem”—out of The New Tourism (Sand Paper Press, 2010). There’s a lovely unfinicky sense of heeding one’s materials here: the piece exceeding its origin in cookbook-ery and culinary particulars. Think, per contra, of something like Tom Clark’s “Sonnet” that begins “The orgasm completely . . .” with its sunder’d rapport between the hint’d at romantic poesy of the title and the sheer biological mechanics of its “text” (“The muscles of the pelvis contract / And discharge a plug of mucus from the cervix / While the muscular sucking motions of the cervix / Facilitate the incoming of the semen”). Mathews’s recipe effortlessly manages to meet the requirements of Horace’s offhand remark that one ought mingle the wholesome with the sweet, the utile with the soothing, “to delight and instruct the reader” (Omne tulit punctum qui miscuit utile dulci, / lectorem delectando pariterque monendo). (One’d do well, naturally, to cook Mathews’s butter and eggs (“Broken into a bowl and salted, two eggs are sprinkled with coarsely chopped parsley and chives, / then beaten roundly with a small fork until they twirl in a ring”) in lieu of critiquing the piece’s word’d (and clarifying) blessings.

There’s something of a sense of the terrific freedoms that accrue to a novelist writing poetry here. An “it ain’t my regular honest job, so I can do what I please” zone of invention. (It works two ways: see Valéry’s remark—“I am too swift—too precise, to tell stories. I operate in exactly the opposite fashion, sweeping the narrative aside. The glittering outcome weighs down on me. I am not good at lingering” And then think how wonderful Valéry’s “novel” Monsieur Teste is.) What “certify’d” American poet’d write a thing like Mathews’s “In Praise of Heinrich Heine”:

In longing, the underage seaman veered from the drift;
Elsewhere, out of the wind, scuppered his stone desire.
Unluck cleaving to him made him no schadenfreudiger—
What was plus or minus? He loved the least cat.

Starbursts should light up this moment, the child
Be jealous of nighttime and its laughing yellow listener!
The red doe of the prince of studies sunders,
Shedding her likeness, and her undimmed luster fits him.

I find that completely mysterious and and dumbfoundingly thrilling. Moments out of some primal story, a saga, a conte de fée. One trusts every move viscerally (suspects each move got made viscerally). Here’s another, jumping off of Mallarmé’s coinage:

Send all our sleds across the ice
Six miles north to Elysium
Where cedar clouds break on the stone
And the sun it raineth every day.

And redoing a line (“And the rain it raineth every day”) of a song sung by the jester Feste in Shakespeare’s Twelfth Night. Against rain, sun. Against Mallarmé’s “nul ptyx”—defined in the succeeding line’s “Aboli bibelot d’inanité sonore” with its noise of glossalaliac lalling, a blab school sound, a plenitude (in a sun-drench’d cranny).

A goodly half of The New Tourism is fill’d with a piece call’d “Haikus Before Sleep”—self-explanatory title, haikus conventionally 5-7-5’d (a requirement gently mock’d: “Haikus are diffic. / Haikus are very diffic. / One haiku is diff.”), ranging liberally about, insouciant of demands “poetic.” A select’d few:

No bizarre tulips
Can link distant parallels
In needed madness.

Oysters would have helped.
Neither they nor golden bream
Were for sale today.

At the end of day
Unparalleled perspective:
The marble-lost clouds.

My nails are warping,
my knees have no cartilage—
sunset: mauve, orange.

deserves two haikus
for making me so happy
with its mists and musts.

The day half-ruined
by one moment of neglect.
But what was that bird?

Where are my glasses?
Right here, under my buttock.
Moths fleeing the rain.

In a piece call’d “In Pursuit of Henry Vaughan” Mathews writes: “Perhaps later, in my last moments, I can choose to relent / and, however briefly, recover that undoubting ignorance / . . . that I so cleverly abandoned.” “Undoubting ignorance”: rather like Nicholas of Cusa’s docta ignorantia (“doctor’d up ignorance,” I like to say). (Ashbery’s “And Ut Pictura Poesis Is Her Name” is pertinent, too: “You can’t say it that way any more. / Bothered about beauty you have to / Come out into the open, into a clearing, / And rest.”) I see Mathews, in The New Tourism (and particularly in “Haikus Before Sleep”) scrapping most of poetry’s own paltry demands in favor of a kind of speculatio, will’d doodling, going at it slant, and accepting it all. “Utterly worth it” sounds it right. 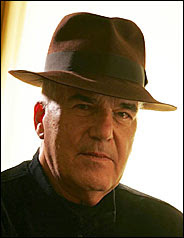