the air thrills with the hum of insects

that’s all it goes out like a lamp blown out

Beckett. How It Is. Recall getting collar’d by the house dick and the back office grilling by one Detective Fish, a genial black man. My paltry defense, anti-capitalist. Bust’d for thieving Beckett. How It Is.

The way sleep serves to jimmy open one’s waking. With its adamant barnacle’d coruscations of what’s gone deliver’d up again. Beckett (The Lost Ones): “A languishing happily unperceived because of the slowness and the resurgences that make up for it in part and the inattention of those concerned dazed by the passion preying on them still or by the state of languor in which imperceptibly they are already fallen.” Coterminous states unperceiving: buck’d up by lust and /or slipping away in deference to mortality’s gin-sop rictus grin. (Think of Oscar Wilde’s report of meeting Walter Pater, who ask’d, smiling: “Why do you always write poetry? Why do you not write prose? Prose is so much more difficult.” And Wilde’s admitting how he’d long consider’d prose the result of mere brigandly enthusiasm, not art.) Think of Richard Howard calling Stendhal’s writing “grasshopper prose”: “there is no pleasure to be taken in it if it is not attended to by presence of mind”:

He engages our complicity, and for that you must be all attention. He is not to be read aloud, he is to be followed on the page, in the sentence, across the synapses of his astonishing clauses, and the sense, the wit, the literature occurs in the gaps between the statements, very abruptly juxtaposed . . .

(“Afterword” to the 1988 translation of Stendhal’s unfinish’d novel Le rose et le vert: “In French . . . one hears the prose and the verse . . . almost concomitantly with the colors.”) Odd to see how Howard’s reading of Stendhal mimicks Ron Silliman’s c. 1977 “New Sentence”-ry. Silliman’s remark’d (interview’d by Carl Boon in 2002) how the New Sentence “might have been more properly termed the new space, insofar as it is in that gap between sentences—a location in the field of writing for which we still lack a decent term—that the new sentence’s functionality appears.” Adding that: “as this device turns the reader’s attention to the immanence of the sentence at hand . . . I settled on that broader category for my noun.” Nothing new under the sun. Just so, there’s, too, Whitman’s “Suggestiveness” (out of the 1888 “A Backward Glance O’er Travel’d Roads”): “I round and finish little, if anything, and could not, consistently with my scheme. The reader will have his or her part to do, just as much as I have had mine. I seek less to state or display any theme of thought, and more to bring you, reader, into the atmosphere of the theme or thought—there to pursue your own flight.” (How picayune / anticlimatick the rife recrudescences of such a commonplace become nearly one hundred years later. See something like Charles Bernstein’s sincere ditty (out of “Writing and Method,” in Content’s Dream, 1975-1984):

Rather than work which is the product of the “author’s” projection / memory / associative process, it is work for the reader’s (viewer’s) projection / construction. The text calls upon the reader to be actively involved in the process of constituting its meaning, the reader becoming a neutral observer neither to a described exteriority nor to an enacted interiority. The text formally involves the process of response / interpretation and in so doing makes the reader aware of herself or himself as producer as well as consumer of meaning. It calls the reader to action . . .

Yadda yadda. Julien Gracq (out of “Proust Considered as an End Point,” in the 1980 En lisant en écrivant [Reading Writing]):

The central mass of the book [À la recherche du temps perdu] imperiously comes down and plasters everything against itself that tends to protrude beyond it, through an all-powerful force of gravity, including the imaginative production of the reader who, deprived of air and movement by the stifling, compact jungle of an overfed prose, never manages to spring beyond it, to play off it freely: how many times has the reader of Proust, when his stimulated mind set off and started to imagine for his own sake, had the feeling that two lines or ten lines down the author was already lying in wait on his path to nip this nascent independence in the bud, that he had rushed ahead to mark every possible path in the literary rally with his own colors. In every novel, a balance is established, different each time, between what is said, and the élan that allows the reader to complete things on his own, freestyle: in Proust the compact proliferation of the explicit reduces the implicit left to the reader to the smallest share.

So I look hard at some lines out of Silliman’s The Alphabet [“Under”], trying to determine if, here, too, “the compact proliferation of the explicit reduces the implicit left to the reader to the smallest share”:

Even in a green, spiked metal mask, like an Africanized hockey goalie, his singing voice is clear as the small boy in his lap holds first one book of poems, then another, then an old paperback novel, as he sings from each, simultaneously playing the small piano in a bluesy, neutral accompaniment, although it’s unclear how many of the people in the little crowd around this softball backstop in a small park had anticipated such a performance.

After the rain, crickets, and above them, the cicadas. I’m crossing the lawn on the estate of the late Andrew Jackson, past the mansion, away from the circus tent under which a bar band sings, “Hang on, Sloopy, Sloopy, hang on.” While she waits for them to place their order, the waitress shifts her weight from one foot to the next. After the lights are out, I lay awake, waiting for my body to settle, the mind to drift, no stars but the random squares of light from offices in the next highrise tower.

CNN pumped into the hotel lobby as though it were background music, too low to focus on, but a familiar, almost comforting prosody. When I talk into a large event, such as a vendor party, my eyes go into tracking mode, seeking out people to speak with, preparing to work the room. The display lifts the roof off Elvis’ gold Cadillac, revealing not only the gold records mounted in the ceiling, but also the little black-and-white TV and the 45 rpm record player. T for tech support, T for Tennessee. Sheet lightning configures the night sky.

Still that stuff’d feeling (Gracq says of Proust—“food more than aperitif”), a compositional heap. The “gap” between sentences is the gap between people in a crowd: “my eyes go into tracking mode, seeking out people to speak with, preparing to work the room.” No freestyle-inducing élan here: the voracious ardor for compleatness is too conspicuous. 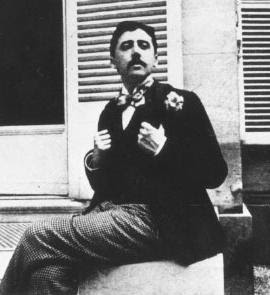 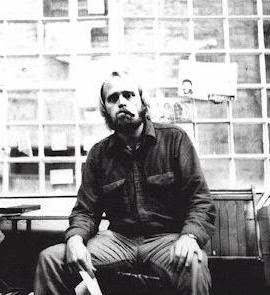