Merrill Gilfillan’s The Bark of the Dog

The ungainly chop of the “informal continuum.” Olson says: “Flow . . . is not continuous ‘length,’ it is leaped atomism—quanta, jumping like nerves in fatigue— . . . rightly sought & used as a habit.”* One with all the amass’d and itch-trigger’d quality of a “physical memory.” Wave / particle: the atomism of flow. The way, scouting through Merrill Gilfillan’s The Bark of the Dog (Flood Editions, 2010), I hit “Damsels”—“demoiselles resting / in an utter stillness / on every other cranny / or twig, every tree / copper-carmine, blanched lapis / tails hiked in the cool air”—and think how it’s a damselfly, wings angled back and clasp’d upright, not the flat-wing’d aeroplane of a dragonfly I’m thinking of (yesterday) saying “green darner.” Thinking’s primary wayward fealty—and excitement—is to its sputtery aggregates of rhythm (see Joyce’s “irregular musketry of applause”) and memory (“jumping like nerves in fatigue”—the two register identically—rounds, bulletins, jump ’n’ jive). Here’s Gilfillan’s “Stone’s Throw”:

And noon: a horse
dead in Manhattan, a big dun dressed
to the nines just struck by a taxi,
Central Park West, the bright yellow cab
tossed up under a linden tree—

both just in
from thirty years ago:

Extend the tongue and take
the conjugation.

And sundown
the elegy-in-advance: for Lewis,
Jerry Lee: Men without pianos
hurry through the stations.

And typing that, thinking, “Is it the color yellow (canary, taxi) that aligns (conjugates) the two? Is it the sound-conjunct of cityscape “linden” and “tenement”?” Thinking: “How close memory lies! That one’s history’d assemble itself so judiciously into the classical lines (and intimacy) of a day.” Thinking: “How adroitly that phrase “Men without pianos” deposits the piano’d “Lewis, Jerry Lee” up amongst the gods!” There’s a fine mix of the jocular off-handed (“a big dun dressed / to the nines”) and the nigh-sacramental (“Extend the tongue”) in Gilfillan’s “stance”—and mimick’d by the lingo. (Recalls, a mite, Charles Wright, though Wright’s work’s apt to collapse into slightly finical God-talk.) There’s an easygoing sense of ritual—ancient impulse—in Gilfillan’s work:

Sprigs for sunrise,
sprigs for Taos, and soldiers
on the steep blue sea.

The slopes of Taos,
true south, building, firing
to the aspen smoulder-golden—
sage for the cello in its breeze.

Sprigs for small things
rousted, on the run, Septembered.
Flocks of longspurs slipping down
the continent by night. Sage for them,
moving though the mesh
of the dangerous starlight.

Isn’t that Father Hopkins who’s summon’d by the “aspen smoulder-golden”? (Or, too, in “Sprigs for small things / rousted, on the run . . .” Lovely echoes of “Pied Beauty”: “Glory be to God for dappled things . . .”) Gilfillan, certes, turns against Hopkins’s father’d-forth end-assuredness: in lieu of a Maker (“Praise him” the poem ends) “whose beauty is past change,” one’s left with pure movement, slippage, unseen—the migratory longspurs “moving though the mesh / of the dangerous starlight.” The sempiternal tenuousness (“What does not change / is the will to change”) of the natural world and us, too, “on the run.” One pleasure in Gilfillan’s work: an audacious precision that half-mocks itself (see, in “Falling Folds,” a report of trying “to catch the pitch of osier”—a red-bark’d native dogwood—with “the Mongol vermilion overset / with Prismacolor plum”; see, in “For Lute and Trombone,” “Darwin’s deep-set monkey eyes / sad as sand”; see, in “Tulip Trees,” “Flocks / of starlings loafing in treetops / . . . like, somehow, / (something about that slack / expectant aggregate), a pack / of baboons around a savannah pond.”) Profuse and tangible particulars, human frailty and dignity—that “somehow,” the “personal” (that ineradicable and pervasive sense of a self: of a cheese, it says—“I like its indestructibility / as much as its taste, which is nil. It travels / well”), opposed to the sort of lately prevalent mystificatory hash, Gilfillan himself delineates thus (“Summer Letter”): “You know / the old schoolboy prank / of staring fixedly into the sky / to get passersby to do the same— / X’s poems often seem to work / like that.”

In the center of Gilfillan’s The Bark of the Dog: a series of five longish letter-poems, respondents undivulg’d, work I consider the strongest in the book. The letter-poem must skirt the danger O’Hara (in “A Letter to Bunny”) hazards: “When anyone reads this but you it begins / to be lost.” In exchange, it occasions a wholly malleable “field” tack’d down by sheer intimacy of voice. The absent addressee, the present voice, the fickle interrupts of a history presumably shared: pylons supporting “flow” along the poem’s “not continuous ‘length.’” Here’s one, uncomment’d (though note the “vague scape . . . intelligently used”—that measure of care of one’s materials central to Gilfillan’s work), to end with:

You are in Croatia,
Croazia, reasons
unclear.
We have the stink
of ailanthus on the air, at least
in this corner of town.

I had a dream last week
so classical in its lines
it was an honest pleasure just
to lean back on the Jungian green
and watch it all go by:

Wandering in a lush, vague scape
(rural, but intelligently used,
vineyards and rolling tillage
here and there, forest
on the slopes above), reason
unclear. Then I spy
a pair of bulls emerging
in the middle distance—
they’ve seen me, start my way—
bulls of fierce degree:
wildly colored, striped,
with enormous horns: mandrills
of bulls for a cloud-forest zoo.

On they came, picking up speed,
seemed bent on real trouble. Then,
in the flash of an eye,
the End, I stand and stroke
their noses, reaching across
the fence I nimbly
jumped. Everyone calm
and cozy.

Have you been dreaming
in Croatia?
Once or twice
I saw an abstract New York City
as consummate Tuscan hill town
perched contentedly at the top
of a long spiral path with pleasing
neo-ploughboy Hudson views,

and once not long ago a flicker
of my Uncle Dudley walking
from a house in stolid concentration
to snip a single yellow rose,
then hurry back inside.

But who needs dreams? Catalpas
are in blossom (from the Creek,
not the Greek: “head with wings”).
The other day
I stood behind a woman
with a snood, we were waiting
to cross the street, and when
she turned she had a perfect
Easter Island face—I mean
the moai stones—that broke
in good Jungian style
into a lovely Easter Island smile.

Now that
will change the contents
of your hat.

Audubon, also
in mid-reverie, from one
of his Delineations:
“Reader, I am very happy.”

And when do you get back?

Will you be
wearing, even bearing,
wild cravats?

(“Cravat”: out of the French cravate, applying the national name Cravate [Croat, Croatian] to the neck scarf. “In vogue in France in the 17th c. in imitation of the linen scarf worn round the neck by Croatian mercenaries.” Gilfillan’s care of materials extending unvaryingly, pointedly, to the etymological.)

* Out of the Joshua Hoeynck-edit’d booklet of Olson’s writings extending “Projective Verse,” The Principle of Measure in Composition by Field: Projective Verse II (Chax, 2010), containing the title essay along with a piece call’d “Notes on Poetics (toward Projective Verse II).” Hoeynck’s excellent notes point out how Olson’s next sentence—“A poem must do equal justice to atomism, to continuity, to causation, to memory, to perception, to quantitative as well as qualitative forms, and to extension (measurable existence in field)”—comes directly out of one of Alfred North Whitehead’s 1927 lectures collect’d in Process and Reality: “Olson only changes the word ‘cosmology’ to ‘a poem’ . . .” 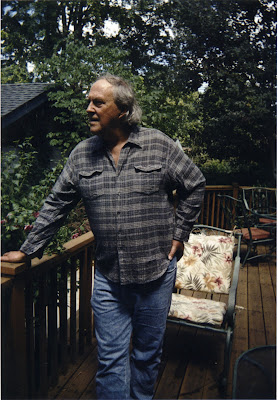