Adina Hoffman’s My Happiness Bears No Relation to Happiness: A Poet’s Life in the Palestinian Century

CXLIX
Abashedly admitted to naming it privately throg-necking. ¶ One unintended consequence of the single unit placement wars. ¶ A questionable little book of spurious quotes parcel’d out of newspapers Canadian and foreign that he propped up to serve for a drivel-bib. ¶ Number the pauses, anchor the metaphors, name the hazards something chummy: the dog Shanks mysteriously lost in childhood, the Franklin half dollar-sized turtle Ben for whom you mash’d up all those flies, tweezering out the wings, the scorn’d girl Wilhelmina who soil’d herself during the state-required examination, a puddle ineffably yellow suddenly there under the chair. ¶ Offer up something lightly-salt’d and mouth-watering in the victual line near chapter-endings. ¶ Wagering that the clang certitude of a contemporary rondeau redoublé’d nab the thing, she mark’d out ‘something something Cheney something heinous’ and took off, in a plausible fit of lyric destiny. ¶ Visible bystander cringe and its replacement: the group shrug. ¶ Thumbing Certs at the zoo ducks. ¶ Numb Nuts and the RVs or Numb Nuts and the Recreational Vehicles. ¶ Who recalls the deceased minor jazzman, the Québécois alto saxophonist Hiccough ‘Hic’ Jacquet, isn’t he bury’d here? ¶ ‘Anus’ fits, too. ¶ Is it the vaporous pouring-forth of questionable utterance that ticks you off, or the unctuous smarm of the pre-guaranteed compliments? ¶ Quechua derives out of the Quechua word for plunderer, or robber, kkechúa. ¶ Imperialism hits home. ¶ Unaffiliated redneck, or hipster Doppelgänger? ¶ Fitting advice in the Captains of Industry boutique, its dressing rooms fill’d with hand-me-downs. ¶ Tantamount to the slings and arrows of your outrageous fortune maybe. ¶ At the sign of the Catamount Foutu. ¶ Towards a literature of anti-post-foreplay paroxysms—‘Folgend den Bomberschwärmen / Komm ich nach Haus.’ ¶ He put toxins to mouth (en su boca), y empezo a cantar (and vamp’d like a cantor). ¶ A nose for knowing exactly how to tweak the info-nose.

Reading, amongst too big a heap of other things half-cock’d and sprawling, the tremendously moving My Happiness Bears No Relation to Happiness: A Poet’s Life in the Palestinian Century (Yale University Press, 2009), by Adina Hoffman. A biography of Taha Muhannad Ali, author of Never Mind: Twenty Poems and a Story (Ibis Editions, 2000), translated by Peter Cole, Yahya Hijazi, and Gabriel Levin, and So What: New and Selected Poems, 1971-2005 (Copper Canyon, 2006), the latter an expand’d version of the former, with the original Arabic en face. I recall reading a New York Times notice of Hoffman’s book wherein Dwight Garner, the reviewer, complain’d of Hoffman’s “waging a sit-down strike against linear storytelling and narrative momentum,” adding that “the book takes 300 pages to bring us to where Mr. Ali publishes his first poem.” As if a poet’s biography is about publishing something! What Hoffman’s book is clearly “about” is place, milieu, particularly Ali’s home Galilee village of Suffuriya, and the way place dawdles in memory—particularly, as here, place destroy’d (Suffuriya, completely razed by the Israelis in the wake of the 1948 war, no longer exists, though it—and a whole shifting Palestinian way of life, under the Turks, under the post WWI British Mandate—is heartbreakingly summon’d in Hoffman’s pages.) (Taha Ali, then aged seventeen, fled to Lebanon during the 1948 war, returning to settle in Nazareth a year later. Hoffman: “an autodidact, he has operated a souvenir shop near Nazareth’s Church of the annunciation for more than fifty years.”) I find myself full of some aching bittersweet nigh-physical pleasure reading Hoffman’s report of how Ali’s father, Abu Taha, (lame, unable to work) talk’d and told stories, “smoked cigarettes and drank unsweetened black coffee, sada, served in little cups” in one small “humble” room (“its minimal contents—a few straw mats, several thin wool-stuffed mattresses, a low stool, the worn shoes of the men cast off by the door”) in the house, a gathering place call’d a madafeh for just such ritual activity. Here is where Ali, as a child, gain’d a love of story, language. Hoffman: “It was the place where he first heard poetry and pre-Islamic legends, first encountered local history and world politics, first absorbed how men talked to one another, first learned how to listen. It was ‘the university of the fallah’” (literally, “peasant,” “villager”). What call’d up the ache, Hoffman’s description of the coffee being prepared:

The preparation of the coffee itself was an elaborately prescribed way of passing the time in the madafeh, very different but no less intricate than a Japanese tea ceremony, and Abu Taha was acclaimed for his excellent brew: he had small iron brazier filled with lit coals, over which he would first roast the greenish beans with a long-handled flat pan and spoon made for him by the gypsies who sometimes pitched camp in the bayader and were known for their metalwork. Then he’d transfer the hot beans to a small wooden scoop where they’d cool, then would move them again to a narrow-necked wooden mortar in which he’d pound them to a fine, aromatic dust. After transferring the grounds to a bird-beaked pot, he would add the water from a jug, and when it had boiled, he would let the liquid sit and intensify, then move it to another, smaller pot, to which more water would be added. Again Abu Taha would boil the coffee and only then, after pouring it into the third and smallest pot, would the coffee by served in thimble-like cups, know as abadi, which contained just a few precious sips—the pungent essence of all that work, time, and concentration. No matter the number of guests, these vessels were always arrayed on the tray in odd numbers, three, seven, five, though no one in Abu Taha’s day could recall the superstitious reason why.

Is it the ritual itself here, that regular knowingness and certainty, or the way it bespeaks a leisureliness completely gone that makes one find longing burst up like a scent? I often think the reason for our incipient madness is loss of dawdle . . .

I’ve hardly read any of Taha Muhammad Ali’s writings, though I do love the little poem that is the source of Hoffman’s title, how it talks of “What seems to you / so nimble and fine, / like a fawn, / and flees / every which way, / like a partridge, / isn’t happiness.” (Something of the simplicity, and the creaturely metaphor, recalling the poems of the Song of Solomon.) Here’s another, longer, in its entirety, engaging with some ferocity cut with humor, the facts, one thinks, personal and political, of the Palestinian century:

In an ancient, gypsy
dictionary of dreams
are explanations of my name
and numerous
interpretations of all I’ll write.

What horror comes across me
when I come across myself
in such a dictionary!
But there I am:
a camel fleeing the slaughterhouses,
galloping toward the East,
pursued by processions
of knives and assessors,
women wielding
mortar and pestle for chop meat!

I do not consider myself a pessimist,
and I certainly don’t
suffer from the shock
of ancient, gypsy nightmares,
and yet, in the middle of the day,
whenever I turn on the radio,
or turn it off,
I breathe in a kind of historical,
theological leprosy.

Feeling the bonds of language
coming apart in my throat and loins,
I cease attending
to my sacred obligations:
barking, and the gnashing of teeth.

I confess!
I’ve been neglecting
my post-operative physiotherapy
following the extraction of memory.
I’ve even forgotten
the simplest way of collapsing
in exhaustion on the tile floor. 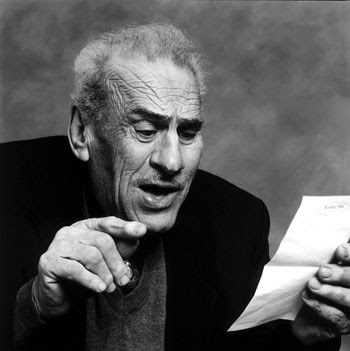 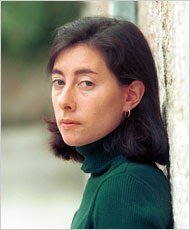