“. . . This leaving-out business. On it hinges the very importance of what’s novel
Or autocratic, or dense or silly. It is as well to call attention
To it by exaggeration, perhaps. But calling attention
Isn’t the same thing as explaining, and as I said I am not ready
To line phrases with the costly stuff of explanation, and shall not,
Will not do so for the moment. Except to say that the carnivorous
Way of these lines is to devour their own nature, leaving
Nothing but a bitter impression of absence, which as we know involves presence, but still.”
—John Ashbery, “The Skaters”

CXLVIII
Making a sappy jab at discomfiture’s buss, and getting a leg up.
Heroic loquacity, and lip gloss, peach-tint’d. To rue one’s Gott-ruin’d
Militancy. The one counting cadence linger’d, and had to be cut
Out of the briefing. Three thousand fucking ducats! Going
All the way to Moscow and back in my space-annihilating headgear
(Another example is Kafka). The shrapnel’s way of smothering the dys-
Functional blanketing surmise that ‘nothing is / But what is not.’
High rhetorical hootings
In pieces, a
Scamp way of
Dazzling the eructing
Electorate, though un-
Patent’d by me.
I am thinking
Of the trochlear
Groove the rope
Runs along, its
Way of knowing
Each echt stitch
And cable of
Immodest ropery. All
The immaturely circumstantial
Fuckers just bury
The works under
In orgillous rejoindures
And pedant implausibilities
The likes of
Which’d blow doors
Off the kingly
Bed-chambers provided
He didn’t sleep
Standing up. They
Cry ‘Idiom! idiom!’
With moral anguish and copacetic delight. One brother had to be cut
Out of the silk briefs he’d donned for R & R in Tokyo, blood-gush
In the pitch of the Huey, and never evacuat’d be until
Great Birnam Wood to high Whatsisname come, shit
Bouncing everywhere. I wrote Spaceman on my pot. Cross’d it out
And wrote Mowgli. Got out of there without being turn’d into jungle-
Broth. Brother, ‘my heart hath but one string to stay it by.’

“Little Sadie” lyrics dogging the humid air coming up off the bicycle tire, shout’d to nobody in particular: “I run right home and I went to bed. With a forty-four smokeless under my [drawn out signifying diminuendo’d moan] head . . .” Solipsism’s only got itself to drag down into the flaccid varietals of amusement, no? I did finish off that Lopate book, Notes on Sontag, with increasing skepticism and disenchantment. Lopate talks about Hippolyte, the protagonist of Sontag’s early novel, The Benefactor, a man self-admittedly “in the enviable position of being entirely at my own disposal, free to pursue my own questions . . . and to satisfy . . . my passion for speculation and investigation,” and suggests that Sontag’s “bravery is in insisting on the allure of solipsism”:

I submit that I made a choice, admittedly an unusual one. I chose myself. And because of my absorption in myself and relative indifference to other people, my inward ear became acute enough to hear a mandate from myself which isolated me from others. The mandate was, so far as I understand it, to live out to the fullest the meaning of privacy.

I think you bipeds
have a catchphrase for it: “To thine own self
be true, . . .” though like a blind man’s shadow,
the second half is only there for those who know
it’s missing. Merely a dog, I’ll tell you
what it is: “. . . as if you had a choice.”

Which is awkwardly put, the way any one-line joke insert’d (storyboard’d) into or, say, graft’d into, the trunk of a piece, is liable to fail to deliver the solid gut-grab it did when ad lib’d corner of the mouth E. G. Robinson style in the bar the night preceding.)

(Windbaggery: sign of trying to sneaky-Pete away without another look at the Lopate Sontag?)

What the book accomplishes, no little thing, is to turn one back to the works, particularly the brilliant early essays (though, admittedly, one turns so out of impatience and discontent with the character “Susan Sontag” herself: that is to say, she sounds simple insufferable, vain, obsess’d with stature, meanly serious, dismissive). Though, anti-up to an aperçu like—

Lately, the appetite for the truly great work has become less robust. . . . Stripped of its heroic statue, of its claims as an adversary sensibility, modernism has proved acutely compatible with the ethos of an advanced consumer society. Art is now the name of a huge variety of satisfactions—of the unlimited proliferation, and devaluation, of satisfaction itself. Where so many blandishments flourish, bringing off a masterpiece seems a retrograde feat, a naïve form of accomplishment.

—(out of Sontag’s essay on Hans Jürgen Syberberg’s film “Hitler,” in Under the Sign of Saturn) and one is reluctant to fold early. Or, what about the line out of On Photography: “Television is a stream of under-selected images, each of which cancels its predecessor.” (Ah, so, too, the steady gratificatory miasma of Blogland . . .) There’s a fierce morality to Sontag that defines itself in contempt for something like a mass lack of selectivity (it’s a dangerous stance, knowing what’s “good for” hoi polloi). In “At the Same Time: The Novelist and Moral Reasoning,” she says:

The so-called stories that we are told on television satisfy our appetite for anecdote and offer us mutually canceling models of understanding. (This is reinforced by the practice of punctuating television narratives with advertising.) They implicitly affirm the idea that all information is potentially relevant (or “interesting”), that all stories are endless—or if they do stop, it is not because they have come to an end but, rather, because they have been upstaged by a fresher or more lurid or eccentric story. By presenting us with a limitless number of non-stopped stories the narratives that the media relate . . . offer a lesson in amorality that is antithetical to the one embodied by the enterprise of the novel.

Though, of course, novel follows novel, “fresher or more lurid”—there is mention by Lopate, too, of Sontag’s constant push to be first “fashionista” out of the shoot with news of what’s “the real thing and the rarest”—her approbatory nod for Roberto Bolaño. As Lopate puts it: one sees such a tendency either “in a negative light, as an insecure need to be always on the cutting edge, or, in a positive light, as a demonstration of her curiosity and unquenchable enthusiasm for making new discoveries.” (And, with that—and vaguely wondering if I know that dude—and a growing opprobrium for my own unfocus’d—lens smear’d with Vaseline making everything seem “damp and inconsequential”—spouting, I move “off.”) 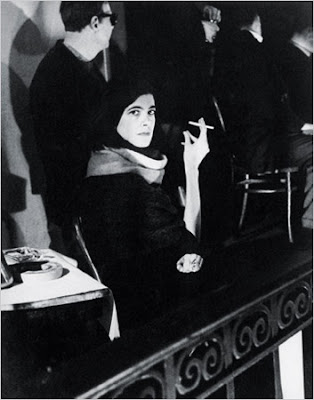