“What’s past is prologue”

Isn’t it one of the perennial (impossible) reveries of art to return things to thing-hood and beings to being-hood, stripped of any human (cultural) décor or use or encrustation? Such a dream haunts Devin Johnston’s Creaturely and Other Essays (Turtle Point Press, 2009)—signal’d by an epigraph out of David Malouf’s An Imaginary Life, “The creatures will come creeping back—not as gods transmogrified, but as themselves”—long fermata bass note holding against the high treble passacaglia-work (or understory low-stealth to canopy gymnastics). For Johnston’s means of getting at the nature of beasts creaturely here is roundly (read: solidly, and layeredly, a musical round) digressive: in the spirit of Guy Davenport (capable of assembling and aligning the beams of a lecture—the walling-in accomplish’d in situ—while walking to teach at the University of Kentucky), or of A. R. Ammons, who claim’d “a poem is a walk” (and recalling, too, the terrific finely-observed natural histories of Merrill Gilfillan), Johnston writes:

In keeping with the etymology of the word digression, I drafted these essays walking around St. Louis and its environs, where I have lived since 2001. As Henry David Thoreau would say, I acted for a time as self-appointed inspector of thunderstorms and starlings, sycamores and squirrels, making my daily rounds. Weedy species and volunteers—common forms of life, opportunists like ourselves—I took as my particular charge. I sought out their local haunts, imagining what they saw, heard, smelled, tasted, and felt. En route, a poem would often come to mind, my private anthology serving as a wayward field guide to whatever I found. In that sense, the poems quoted here are less objects of study than “equipment for living” (in Kenneth Burke’s phase).

So one is offer’d wondrous randoms through things like animal senses of smell (starring the dog Chester), urban crow gang behaviors, how birds see “hues entirely unknown to us,” mouse riddance (and the Cretan “Apollo Smintheus, mouse god”), and owl ossuaries. Each essay, with modesty and patience—that is, with consummate deliberation, without flaunting one’s lore—assembles and concatenates a marvelous set of tidbits into a prose condensery (Lorine Niedecker’s word, there is a kinship between Johnston’s decant’d and finely-alloy’d prose and Niedecker’s late pieces). Along the way, one finds quoted apt penetralia out of writers as various as Robert Adamson, James Thomson, Emerson, Yeats, Basil Bunting, Marianne Moore, Robert Burns, Tom Pickard, Chapman’s Homer, Jane Harrison, Aidan Higgins, and Coleridge (“A dunghill at a distance sometimes smells like musk, and a dead dog like elder-flowers.”) There’s a piece at the end of Johnston’s “Murmurations” (about starlings—present in North America only because Shakespeare had Hotspur, in Henry IV, say he’d have “a starling shall be taught to speak / Nothing but ‘Mortimer’” and nearly three centuries later “A drug manufacturer named Eugene Schieffelin decided that New York should be home to all the songbirds mentioned in Shakespeare and joined the American Acclimatization Society for that purpose”—resulting in the late nineteenth century release of half a hundred breeding pairs into Central Park) where an enormous shifting flock of starlings descends to become “a concentrated darkness in the oak limbs,” and Johnston’s own essayistic meander and mustering method seems spell’d out in the murmuration’s collective self-organizing banter and rustle and squawk, its “pastiche of motifs”:

The starlings begin a dusk chorus, condensing all they have heard of relevance or curiosity. Just as dreamwork transforms the body’s stimuli and residues of desire, the birds’ song sifts the ambience of this day. Their chorus accrues much that we will never hear, learnt from unpopulated grain fields, parking lots, and unlivable spaces that we have built. It rises to a great cacophony against the last light before diminishing.

One motif that recurs in the essays: the liminal, the border, any division between inner and outer, home and away (or two fields, all that activity in the demarcating hedgerow between). In “Mouse God,” Johnston reports finding (one winter night in a St. Louis kitchen) “a deer mouse frozen in panic on the floor, forefoot suspended midstride,” and reflects: “The sudden manifestation of this creature—tiny yet intense—carried an uncanny charge. Unheimlich, the German for ‘uncanny,’ literally means ‘unhomely,’ something from outside that has crept indoors.” Elsewhere, in “Specific Worlds,” Johnston refers to biologist Jakob von Uexküll’s model of particularly “creaturely” scales (“We are easily deluded into assuming that the relationship between a foreign subject and the objects in his world exist on the same spatial and temporal plane as our own relations with the objects in our human world”), and writes:

More than mere organism, an animal gets constituted in its essential activities of perceiving and doing. . . . von Uexküll describes the organized experience of a particular creature as its Umwelt, a German compound meaning “a surrounding world” or “milieu.” . . . The Umwelt . . . is not a shared environment but an entirely subjective, phenomenal world. We can enter the Umwelt of another creature—its particular world of time and space, cause and effect—only through imaginative forays.

And there Johnston—rather like that deer mouse, “forefoot suspended midstride,” moves to consider the etymology of foray, and uses its “roots in foraging” to move off in a fine mode of aimlessly considering.

Particularly enjoyable, the recurrent (and various) references to classical writings and myths, making casually wise and “homely” connections. Here’s that mouse god and its appearance in George Chapman’s translation of The Iliad:

Apollo Smintheus remains familiar to us through the Iliad. At the epic’s opening, Agamemnon enslaves the beautiful daughter of Chryses, priest of the mouse god, and refuses any ransom. Chryses prays,

O Smintheus, if crownd
With thankfull offerings thy rich Phane I ever saw, or fir’d
Fat thighs of oxen and of goates to thee, this grace desir’d
Vouchsafe to me: paines for my teares let these rude Greekes repay,
Forc’d with thy arrowes.

Smintheus answers this prayer after the manner of rodents, spreading through the Greek army a plague transmitted on the tips of his arrows. In Chryses’s temple, nearly a thousand years after the fall of Troy, Scopas carved Apollo with a mouse beneath his foot. Coins from the region depict the god cupping the little creature in his hand.

And, because writing is something of a braid or fabric of seeings, I find myself perfectly enchant’d by Johnston’s working together (in “Second Sight”) into a single piece of bright cloth, notes about the seventeenth-century Scottish minister and seer of fairies Robert Kirk, author of The Secret Commonwealth, an account of fairy life record’d, the suggestion is, by one of “hypersensory vision” (“Some have bodies or vehicles so spongeous, thin, and defaecat that they are fed by only sucking into some fine spirituous liquor that pierces like pure air and oil”), along with Robert Hooke of the marvelous Micrographia and William Blake. Johnston:

According to Kirk, the senses of these refined spirits are attuned to vibratory hints of distant events, even those yet to occur. In this respect, they share with animals the intuitive powers that we have lost:

As birds and beasts, whose bodies are much used to the change of the free and open air, foresee storms, so those invisible people are more sagacious to understand by the Book of Nature things to come than we who are pestered with the grosser dregs of all elementary mixtures and have our purer spirit s choked by them.

Like the fairies themselves, “men of second sight” and seers of fairies have a spectral sensitivity that surpasses “the ordinary vision of other men.” They witness the hidden world through improvements “resembling in their own kind the usual artificial helps of optic glasses (as prospectives, telescopes, and microscopes).” Robert Hooke, the father of microscopy and a close contemporary of Kirk, argues in Micrographia that such instruments might compensate for the human loss of both sensory perfection and Adamic knowledge. A century later, William Blake conceived of our fall from full sensory awareness in similar terms. In The Marriage of Heaven and Hell, he tells us that the senses were “enlarged and numerous” until contracted into five: “for man has closed himself up, till he sees all things thro’ narrow chinks of his cavern.”

Another way by which unobstruct’d full human knowing of things and creatures is quash’d.

Creaturely is a terrific book, exquisitely design’d by Jeff Clark (an enigmatically crop’d full-bleed detail of Hans Holbein the Younger’s early sixteenth century painting, A Lady with a Squirrel and a Starling graces the cover). 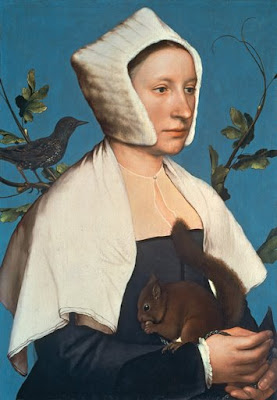 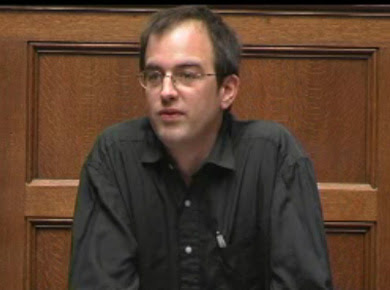 CXLVI
A method coughs
up its loud
caucus and succumbs

to mannerist hair-
splitting: the sun
clangs down reverberant

like a big
brass cymbal, its
width precisely that

of the length
of Prester John’s
foot. All night

scooping up scolds
of rust’d dog-
tags in bazaars.

If art is
the conquistador of
naught, why flank

it with imperial
gusto? It commemorates
everything or nothing,

marshals itself against
the trudge-particular
dudgeon of high

martial music and
its inveterate squad
or company: art

patrols no edge.
Out of green
jungle and ‘unwholesome