Jeffrey Yang’s An Aquarium (Graywolf, 2008) ends with a quote out of Sir Thomas Browne: “Thus there is something in us that can be without us and will be after us though indeed it hath no history what it was before us and cannot tell how it entered into us.” A terrific curtailing of the usual human vanity. And though Yang’s epigraph opening the book (by Paul Valéry) may deliver the customary news of writerly world-making, it, too, succumbs to the ferocity and somnolence of a seemingly oceanic aquarium, its all-consuming theater a poor stage for man’s inventions. Valéry:

My pen was creating myths; they flowed from my expectant self, while my mind, hardly seeing what my hand was inventing right before it, wandered like a sleepwalker among the dark imaginary walls and submarine theaters of the aquarium.

Between Valéry and Browne, a bestiary of the sea, alphabetical (“Abalone” to “Google” to “Rexroth” to “Zooxanthellae”) and wayward, comic and modest. What I find enthralling: Yang’s restraint (a form of caring, of respect), the near absence of the usual clamoring self, I-identify’d or not. (In “White Whale” one reads “Round and round we wheel / . . . / till self’s freed from ego.”) In its place: taut arrays of (predominantly) fact (“Nature describes its own design.”) intertwined with myth and (mostly point’d) human history, “a felicity of association.” Sense of no padding, the lovely leanness of the notational. Here’s two somewhat randomly select’d:

Aristotle thought eels
“the entrails of the earth.”
If “eels” were replaced with
“politicians” this image
would be a guide-
way to a sign. Instead,
it’s an instance of
converting Metaphors
into Proprieties. And so Browne
doubted Aristotle’s leap
into Euripus.
For not understanding tide’s
motion, Aristotle recognized
the “imbecility” of reason.

Euripus: the straits between mainland Greece and Euboea, with tremendously strong tidal currents that reverse directions a half dozen times a day. One story’s got it that Aristotle drown’d there, attempting to ascertain the reason for the push and pull of the currents. And:

The barnacle settles forever
upside down in its small volcano.
On rock, whale, ship, log—it is
happy anywhere there’s current.
The barnacle has the longest penis
of any animal in proportion
to its body size. Happiness
and proportion:
never be ashamed of evolution.

Deftly observed, funny, just. With a marvelous shrug of assent at the world’s providings. What I like is Yang’s willingness to work so unaffectedly a vein of poetry as knowledge (including “book-learning”): I think only of Eliot Weinberger (who blurbs the book, hurrahing its “musical icthyographics” among other things) who is doing anything similar. In “Foraminifera,” Yang, after nodding at Oppen’s “sincerity, clarity, respect” and Zukofsky’s test of poetry in “the range of pleasure / it affords as sight, sound, and intellection,” concludes:

In a dream
Vishnu visited Appakavi
who received the secret of
Nannaya’s grammar: Poetry
is the ultimate learning.

Like Weinberger, too, Yang is a fierce cultural internationalist in the tradition of Rexroth and Pound (a guideway nigh-completely abandon’d by the presumed inheritors of the lineage, the mostly myopic and homegrown Language writers), capable of drawing on Chinese, Arabic, Mexican, Hawai’ian (see the poem about “Hawaii’s native triggerfish,” the humuhumunukunukuapua’a), Indian, and Old Norse, beyond the usual European and “Classical” sources. Too, Yang’s able to move adroitly between a rather chisel’d discursive mode and one of the condensary. See how “Oarfish” proceeds by sound and citation:

Which, in it’s temporary alignments (the hypothetical Oort cloud’s sphere of billions of comets up against that ubiquitous Augustinianism regarding God, among other things) renders a whole world of marvels and mysteries. Yang’s impulse, too, is ecological: things worth tending, and attending to. In the longest (and final) piece, “Zooanthellae,” he writes in numbing detail of the early U.S. atomic bomb testing at Bikini Atoll, including the bomb Bravo, “detonated on the ground . . . ‘for minimal fallout,’” whose “nuclear cloud reached a peak of 21.6 miles tall” with a “yield” “‘estimated to be near 20 megatons, or the equivalent of 1,000 Hiroshima-type bombs.’” Against which is put the official cynicism, the disrupt’d lives of the people: “They left the people with 4 words: ‘Don’t drink the water.’” And, the discovery of the coral algae “zooxanthellae”: “a dinoflagellate that lives symbiotically with the coral, supplying it with oxygen and nutrients thru photosynthesis while transforming calcium ions from the ocean into calcium carbonate the coral uses to grow.” Mutualism (elsewhere “Kropotkin’s mutual trust and support” is mention’d), the ordinary and the rare, and that nearly completely missing element in contemporary poésie wisdom imbue the pieces in An Aquarium. Yang’s constructing workable models out of disparate parts, making for a way out of dystopic tomfoolery. As he writes in “Google”: “Information / is originally nothing but difference.” And: “knowledge purifies.” 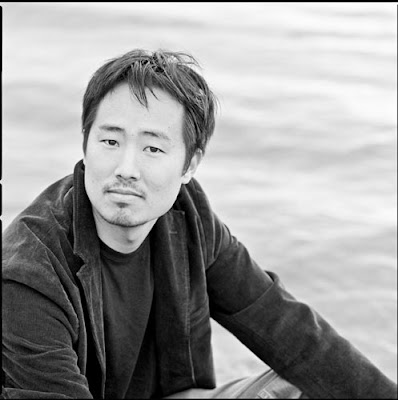 CXXXII
Oh the doghole boys huff opinionatedly, sole carriers of wit in the dis-
Eased cyber districts. They pin badges one to another, and shriek. Down
By the mill pond I am reading Swift’s Directions to the Cook. If
The bicyclist with the fez divvies up the macaronicks rightly, I intend
To conduce a ditty hither. Arschloch. Putain. Baldricker. The kind of
Dunce-holy things slung common out, talking it up, gripping the bat a little
Tighter. A straw man perch’d up against a lectern, or a dugout. If only I could
Write it down without the humid buffings up, sec et net. The police take care
Of that, pulling down the contaminating scrim of language, formal, in squads. One
Day reading a newspaper aloud out by the gazebo, my pockets stuff’d
With prog’d vittles, hams and oranges, I look’d like a Flaubert ours,
Bounty-tinged and shouting at the barren tenacity of rude sentence-ry, its
Tendency to insert itself into rhythmic tediums, it sentimental predilects, its
Cozy illimitable drive. The grizzled snout fit to fit the Kodiak kodachromatick’d
That day in April up in Alaska, though I doubt that meaning ought be so
Mean.