CXXXIV
According to the Goncourts,
to whom he shout’d
it whole one day
‘in a stentorian voice,’
Flaubert’s early novel, Fragments
of Unremarkable Style, concern’d
the autochthonous melancholy of
youth unassuaged, even by
an ‘ideal whore.’ Later,
after a plausibly indifferent
meal, one unremark’d in
the Journal, the hermit
of Croisset pull’d out
“oriental trappings,” hoist’d a
red Turkish tarboosh, look’d
with morosity and tenderness
at leather breeches worn
in Egypt: ‘a snake
contemplating skin it’d shed.’
What any writing is.
If the soul of
any other is so
monstrously dark, what hilarity
we muster is a
dodge. So we gird
up repute with stupefying
feints and rent residuals,
sluice convulsedly through howler
unabash’d and wisdom infecund
alike, dropping a word
here, hoisting one up
for assay or proof
there. And out walking,
dog at heel unbid,
recall the imponderabilia of
‘this worldes transmutacioun,’ how
that other, too—the
one jotting cuff-notes
mid-ruckus—’d ‘seyn it
chaungen up and doun.’

Books invariably pointing to books, ganglionary knots of convergence and divergence: that’s how I end up prancing like a Firbank through the Journals of the brothers Goncourt, Edmond and Jules (in the 1962 Robert Baldick translation and selection, recently reissued, call’d Pages from the Goncourt Journals). Edmond, who lived long after Jules succumb’d to syphilis, prefaces one volume (in 1872) by claiming it “the confession of two twin spirits, two minds receiving from the contact of men and things impressions so alike, so identical, so homogeneous, that the confession may be considered as the effusion of a single ego, of a single I.” Which I find terribly refreshing after all the late twentieth century hoopla and avalanche of the shifting, discursive, unstable, “positioning” self, the common cant of it. “I am half an I.”

The fun, though, is in the snips of table-talk, the literary sightings. Here’s Baudelaire à table in October 1857 (a couple of months after being fined 300 francs for offending public morals with Les Fleurs du Mal, and having six poems therein suppress’d) at the Café Riche (which “seems to be on the way to becoming the headquarters of those men of letters who wear gloves,” where “none of the guttersnipes of literature would venture”—rather like, say, oh, the Kelly Writers House today—one learns how one “Murger . . . is rejecting Bohemia and passing over bag and baggage to the side of the gentlemen of letters . . .”):

Baudelaire had supper at the next table to ours. He was without a cravat, his shirt open at the neck and his head shaved, just as if he were going to be guillotined. A single affectation: his little hands washed and cared for, the nails kept scrupulously clean. The face of a maniac, a voice that cuts like a knife, and a precise elocution that tries to copy Saint-Just and succeeds. He denies, with some obstinacy and a certain harsh anger, that he has offended morality with his verse.

(The Journals rather casually note how, at a dinner “with Flaubert, Zola, Turgenev, and Alphonse Daudet” at the same café in 1874, “We began with a long discussion on the special aptitudes of writers suffering from constipation and diarrhoea,” which, it occurs, may possibly prove a distinction at least as useful as Ron Silliman’s two scat-heaps of “post-avant” and “quietist.”) (Too, one notes Turgenev’s remark about the limits of the French language: “an instrument from which its inventors expected only clarity, logic, crude and approximate definition, whereas today it so happens that this instrument is being handled by the most highly strung and sensitive of writers, and the least likely to be satisfied with approximations.” Ah, for the days of concerns about precision and intent, about the “reach” of one’s, gulp, lingual tool, something more than the squabbled-up offal of mere “attitude” . . .)

Talk with Flaubert and the literary critic Sainte-Beuve about copyright, Sainte-Beuve reacting to someone’s call for “perpetuity of rights”:

Sainte-Beuve protested violently: ‘You are paid by the smoke and noise you stir up. You ought to say, every writer ought to say: “Take it all: you’re welcome to it!”’ Flaubert, going to the opposite extreme, exclaimed: ‘If I had invented the railways I shouldn’t want anybody to travel on them without my permission!’ Thoroughly roused, Sainte-Beuve retorted: ‘No more literary property than any other property. There should be no property at all. Everything should be regularly renewed, so that everybody can take his turn.’

And the Goncourts (aristos non placables) subsequently see in Sainte-Beuve “the fanatical revolutionary bachelor”: “he seemed at the moment to have the character and almost the appearance of one of the levellers of the Convention. I saw the basic destructive urge in that man who, rubbing shoulders with society, money, and power, had conceived a secret hatred for them, a bitter jealousy which extended to everything . . .” Usual tiresome ploy of the “made” to upstart sneerers, wholly disbelieving that one might not aspire to “making.”

Off to remake myself into a half-man (half-biscuit). À Lundi. 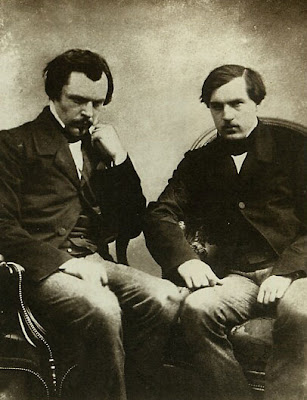