Williams in A Voyage to Pagany (1928), the novel written after travels to Europe (beginning, contentedly, in a hotel in Paris, with its “small familiar violonshaped bidet”): “It’s a distinction to be nobody and to do as you please.” (A stance so unmitigatedly foreign to the madly careerist “scene” today as to compel nigh-compleat rancor and disbelief.) The baldly autobiographical Williams character—a doctor call’d Evans—a sputterer, a sparrow fighting mites with a dust-bath, a ferociously deft bantamweight taunting the bigger birds (or the poindexterous rabid know-nothings), thinking how he’s:

. . . American—and this and that and careless—and amused and lazy and more than a little critical and no drunkard at any time and—hard to crack, a sparrow in short. He wanted to write—that was all, and not to have written, but to be writing. He got his whisky that way, he got all he ever got from that. To be feeling it in his mind and his fingers as it flowed out . . . there in secret he lived.

And, some pages further:

He wrote because he loved it and he wrote eagerly, to be doing well something which he had a taste for and for this only did her write. As far as wishing to advance his acquaintanceship by his writing, or to advance himself, it never entered his mind. If they liked it he was entranced, if not, he didn’t blame them.

(Recall the prime inheritor of Williams’s feisty nonchalance, Frank O’Hara: “Too many poets act like a middle-aged mother trying to get her kids to eat too much cooked meat, and potatoes with drippings.”) That “to have written”—that focus on all the finish’d off trappings of the live flow itself—spit-out empty shells, post-firing debris. Williams, entraining to Paris, worrying the “stretching mood” of the perennial now: “Or is it alive? It is. My stretching mood is all I am thinking of. America. Here is. Here is. Here is.” (What Robert Creeley, in Words, plausibly translates into “ONE THING / done, the / rest follows. // Not from not / but in in. // Here here / here. Here.”) It is that trajectory, the endless impartial beingness of “in in”—that Williams opposes to the “form beautiful” of the done-with art object, what he calls “the dead stops of life, everything made static—stopped that is—made into a form beautiful.—It gave him a chill, that word.” (Williams is constantly dogged by the way “beauty” requires a stasis akin to death: “The whole world is built to keep it from being said.”)

There’s a marvelous sequence in A Voyage to Pagany where Williams’s “Evans”—after a desultory walk through the streets of Paris with “Jack” (apparently a character model’d after Robert McAlmon, marry’d to Bryher—Annie Winifred Ellerman, daughter of the financier and shipping magnate John Ellerman—“at death, in 1933, the richest Englishman who’d ever lived”)—recalls playing hare and hounds as a kid. Implying, évidemment, that the current conditions differ little. Williams, caught between various abandonments—one being “Europe,” its thrall of inconsequence, another being “self” (in a letter of 1935 to “Old Sock” Ezra Pound, Williams says: “if my cocky ancestors had been driven by penury to Tasmania I’d be sticking up for that spot in the sun also—perhaps. I know it looks attractive to say I stay where I am out of fear—which is more or less true. But there are all kinds of fears. Sometimes we fear to lose what we hold precious more than we fear to lose ourselves. I have never had any illusions about places. They mean nothing to me. I know that I will be the same in any of them”):

Just go. Why? He couldn’t let himself do that. Why not just kill yourself. It’s more sensible. And yet, he dreamed to go, madly, as he remembered at twelve he had sometimes done, madly, with no end in view; that day the kids couldn’t catch him at hare and hounds, that phenomenally successful day when he had kept them baffled all the afternoon in a certain neighborhood, running, hiding, showing himself, doubling on his tracks, escaping, running again, showing himself and so on, hour after hour, running on. So, desperately scattered, he had remained still; whereas they, Jack and the rest, being always collected, could go loose. But if he should go loose, he would die, of this he was convinced, since to go loose to him was to go totally ungoverned, drunken, syphilitic, starved, jailed, murderous: Finis. The rest were pikers really—careful schemers, really. This had been his excuse. Not an excuse. It was the wall over which he could not climb, short of annihilation. This kept him enslaved. He could see himself running, hitting against the bushes madly; bruised charging against Moresco the giant back; going against insuperable odds.—Yet that is the only thing worth going against. He was willing but he couldn’t—that was all. It they wanted to be damned fools, all right. Yet, that was what he wanted to be—really; abandoned.

Monstrous (and endless) ambivalences of the solitary in the polis. 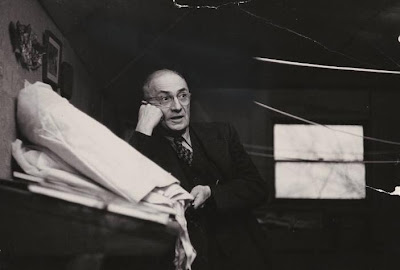