Graham Foust’s A Mouth in California

Graham Foust’s A Mouth in California (Flood Editions, 2009) is epigraph’d with a rather Beckettesque exchange—

—out of Don DeLillo’s The Day Room, that, too, includes the lines: “My voice isn’t part of my body. It’s what comes out of my body when I speak. It’s the air which by some miracle we are able to shape into the sounds we wish to make.” One bounce, epigraph to first piece in the book, and more Beckettesquerie (here invading Hemingway):

What’s this place, between
geography and evening? The sun
also bludgeons; a car has three wheels;
and what’s the wrong way to break
that brick of truth back into music?

I’ve come covered in arena dust,
my mouth a sleeve’s end,
meatless. I’ve come somewhat up,
and I’m here to lick
the static from the ground.

Twice, I’ve been evidence of,
if anything, my breathing.
Not particular, I’ve pissed against
a cage, pretending wind.

Swallowed whole, a songbird might
could claw back through the hawk—
or so I’ve thought.
The choosing of a word
might be its use, the only poem.

One refrain in Beckett’s series of short prose “Fizzles”—fiascos of sequence, and likely a trigger to the DeLillo—goes, “it’s impossible I should have a voice.” (“Fizzle 4” begins: “I gave up before birth, it is not possible otherwise, but birth there had to be, it was he, I was inside, that’s how I see it, it was he who wailed, he who saw the light, I didn’t wail, I didn’t see the light, it’s impossible I should have a voice, impossible I should have thoughts . . .”) So that: what one perceives, in the series of seeming category mistakes—“between geography and evening”—is a disembody’d Beckett voice. “Geography” and “evening” finding a category in, say, “They give birth astride a grave.” “The Sun Also Fizzles” proceeds (and succeeds, I’d wager) by its jagged adamant refusal to twig to a “right” way “to break / that brick of truth back into music.” That is, it acknowledges (enacts) the infissiparous truth of music (and “Money,” and “Rain”—other sorts of indivisibles) itself: that songbird “swallowed whole.” (If I’d quarrel with the piece: I’d out with my jackknife to scratch at the surface of the lines “I’m right / where I wanted to leave me” and “At mirror, / I’ve neither me believed,” both, for signs of preciosity. I might, too, try to quit reading the final sentence as “The choosing of a word / might be its only use . . .”—though, frankly, such a mishap strikes me as somewhat less falutin’ and closer down to earth than any mention of “the only poem.” There is, too, a poem call’d “The Only Poem.”)

Titular poems ride hard throughout—“Poem with Manifest Destiny,” “Poem Beside Itself,” “Poem with Concussion,” “Poem with Grownup,” &c. Danger of a shtick, is what I think. Danger, too, of a shtick, a manner’d thing, in a Foust’s way of breaking up some of the usual sentences and offering up badly-repair’d replacements. Sort of a Pun City breakdown, though not exactly: a category shift drives some (in “On Form for Haggard,” Foust Williamsizes: “your ‘Long Black / Limousine’ // depends so much / upon // mistakes / a missed turn // “the curve nobody / seen”—perhaps it’s a “forcedness” to the “mistakes” I’m conscious of): “To trip the forced majestic.” “Lyric Poetry After V-E Day.” “I see a thick flash of paint, a stiff / light and I’m blind as a bell.” “A mouth on every bird.” “I cross the clear / alarm, the nonsense of not / being stared at . . .” (It’s entirely possible that I am hyper-attuned to Foust’s veerings. He’s on record—in a somewhat dated interview I recently cotton’d to—as saying, mostly regarding “little conglomerates of language and tune” out of popular song:

I’m all for poking at the necessary strangeness of the lingual thrum and perturbancy—I retreat though at the gesture of anything’s becoming doxy.

The pieces in A Mouth in California: mostly longer, meatier, of a complexity rarely encounter’d in Foust’s earlier work. One deleterious effect: making some of the shorter pieces seem skip-worthy. Here’s “Poem with Feelings”:

Thoughts of them, thought
or not,
are mostly that.

There’s always
been a pointlessness.
Rejoice.

Kudos for the oi charge detonating within “pointlessness” and “rejoice,” making the connect. And to the fix’d similarity between “thought” and “that”—thought is only that, is what the clipped-off t’s say: feelings—par contre—splay out slovenly (unthunk) pointlessly as joy. A sufficiency in fifteen words. Foust works up a villanelle (a kind of mocking villanelle à la Bishop’s “One Art”) call’d “After Taxes” (ending: “And there was never not a fiscal year. / We’re timeless in the red, beyond ugly. / There are things less important than money.”) He calls forth Robert Creeley both in “Poem for Robert Creeley” (with its powerful ending: “And life, no matter / whose or how real—and matter: / expensive, relative, irrelevant—all of it suffices precisely, / slightly. All of this / undoes just what you’re not.”) and in the more-truculent-at-divulging-itself “The Call,” with its echoes of “Here here / here. Here.”:

Windows. Where
do you not want
to go today.

You. You.
You. you.
Regret’s not letting up.

Reason wants
a lift from where
you left it.

(Other writers summon’d: Spicer, Reverdy, Pound, Stevens, Margaret Atwood. A couple—probably healthy—signs of writerly loathing: how “To the Writer” (“your dumb touch, your clunky / fuss”) begins: “Another cloud spun to nothing, one / of nature’s more manageable kills. / Another borderline-meaningless morning save / for everything . . .” And “The Only Poem” ends: “Even in danger / you’re a writer, liar.”) A final piece, a fine lyric retrospect—likely not the most ambitious piece in A Mouth in California—one tires of contemporary ambitiousness with its conundrum’d heaps, its fizz-little syntactical agons. The poem:

Full of noise and lust, they fled
the city for the shore. It was four
in the upcoming morning. Everyone
slobbered; somebody drove.
Another thirst begun, they had their beer
in cans in bags; their hands, their feet
in frigid sand; their eardrums—make that
their headaches—sewn with ocean.
They’d never seen a moon so willful,
so scissory, never heard the dark water
rearranged so clumsily. Crowded future,
dingy beach. They scratched the air;
they burned and buried things.
They were the fruit they couldn’t reach. 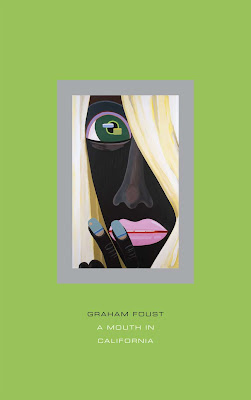