Allison Cobb in Peaches and Bats

Out of the fifth issue* of Sam Lohmann’s excellent twice-yearly magazine, Peaches and Bats, something of Allison Cobb’s Green-Wood:

Green-Wood sprays herbicide throughout the five hundred acres fall and spring to keep weeds from sprouting. New York City has banned from public property two of the chemicals—pendimethalin and 2,4-D. Pendimethalin poisons fish and frogs. 2,4-D was a major component of Agent Orange, which the United States used to destroy the crops and jungles of Vietnam.

According to Cornell University, rats fed 2,4-D gave birth to babies with wavy ribs, a function of general toxicity.

Ladies’ botanies became best sellers during the nineteenth century, thanks to advances in the science of plants and the popularity of gardening among the middle class. Botany was seen as an appropriate pursuit for a young woman, who feels all that delight in [flowers] which seems so naturally to belong to her age and sex.

(a form of being lost)


One scholar calls ladies’ botanies transgenred. They combined science with poetry, quotations from scripture, and flower fables, in which plants personified as women deliver moral lessons. According to the historian Vera Norwood, this was a way of disguising the science so that it would appeal to female readers. But it also kept women among the ranks of the amateurs. Such heteroglossic books were not serious.


Les Fleurs Animées contains fifty-two hand-colored engravings of women- flowers by the French caricaturist J. J. Grandville. This makes it valuable: It sells online for more than a thousand dollars.

The New York Public Library owns four editions of the book in its George Arents Collection on Tobacco. Arents, from Virginia, grew rich off the business and became obsessed. He collected thousands of items of “tobacciana.”

His collection includes the original handwritten manuscript of The Importance of Being Earnest because the plot involves a cigarette case. The Flowers Personified is there because it contains a fable about the tobacco plant. Arents himself never smoked.


In the low-lit, wood-paneled room, I present my I.D. and ask to view this book. A librarian is summoned and disappears again. I have read that the collection is contained in a Georgian-style sitting room donated by Arents, but I am not invited into this sanctum. The librarian comes back with the object cradled on green foam wedges. She sets it in front of me and, smiling, hands me a weighted rope—“the snake”—to hold open the pages.

At first I am afraid to touch the brittle book. I sit looking at the blue cloth cover embossed with gold flowers. The less friendly librarian, a man, taps the green-shaded lamp above me in case I want to turn it on. I don’t turn it on. I do. I read 823 .mR stpircsunaM dna skooB eraR rof mooR gnidaeR rotsA llessuR ekoorB ehT on the glass transom. From a newspaper folded on the table beside me shines the face of the brain-erased woman whom George Bush will this night order back to life.

The study of botany could be dangerous for ladies. Linnaeus created a system for classifying plants based on sex organs, which he referred to in Greek as the “husband” (andria) and “wife” (gynia). Most flowers, however, aren’t monogamous. This aspect of the science had to be kept from young women, or sexual anarchy could result. The 1798 poem “Unsex’d Females” expresses this anxiety:

For puberty in signing florets pant,
Or point the prostitution of a plant;
Dissect its organ of unhallow’d lust,
And fondly gaze the titillating dust.

Opening any field of science to women threatened the social order. The Ladies’ Botany section of Les Fleurs Animées makes the danger explicit with a warning: Stop here fair readers—Go no further. Put down the book . . . they wish to make you scientific.

The author of the Ladies’ Botany skirts the Linnaean controversy: We shall avoid here the use of scientific terms which . . . have no other effect than to distort pretty mouths into ugly grimaces.


To “ping” (short for Packet Internet Groper) means to send a signal out over cyberspace seeking an answer to ensure messages are getting through. It also is called echo request.


In a hysterosalpingogram, a doctor sends liquid dye through the fallopian tubes during an x-ray to get a picture of their shape. The pain may be acute, depending of the force with which the doctor injects the liquid.

hysteria: not simply “womb”
but rather the womb as an animal
on the move within the body

That humiliating cry. It did not come from me.

That sizeable chunk here render’d in some attempt to seize the fearlessness of its inclusions, the way it braids in—like the transgenred “ladies’ botanies” it speaks of—hanks and wisps of fiercely diverse material: personal, historical, scientific, political, etymological, &c. Green-Wood, according to the accompanying “Author’s note,” is “named for a 500-acre Victorian cemetery . . . in Brooklyn, NY . . . opened in 1838 as only the second ‘rural’ cemetery in America, after Mt. Auburn in Boston.” One learns, too, of the cemetery’s first historian, one Nehemiah Cleaveland, and that—“During the period of his cemetery obsession, [he] produced his only literary text, a translation of Les Fleurs Animées.” (Green-Wood, the compleat’d book itself, is apparently just recently out, one of the fifth volume of Heretical Texts publish’d by Factory School.)

Reading Cobb’s work in Peaches and Bats deliver’d me up to thinking about the form of the thing, with its lyric interludes, its documentary hotch-potch, its interpenetrating stew-juices making of the whole something bigger’n its parts. Is the poetic “sole precedent”—“and that one far-fetched”—for Green-Wood’s documentary aspect, Williams’s Paterson? (I doubt it, though I did think of the historical prose lumps in Doctor Williams’s gallimaufry, the Marcia Nardi letters, the story of Sam Patch, the Milton “Mezz” Mezzrow reminiscence, &c. “The pulley and ropes were securely fastened on each side of the chasm, and everything made in readiness to pull the clumsy bridge into position.” What Williams (and seemingly Allison Cobb, too) desires—not unlike Ashbery’s percipient claim for O’Hara’s “Easter” (“a bag into which anything is dumped and ends up belonging there”)—is, of course, what he calls (in a 1943 letter to James Laughlin) a “debaleing,” a loosening up, a busting of the “ordering” containments of form. Williams (regarding Paterson):

If Stevens speaks of “Parts of a World’ this is definitely “Parts of a Greater World”—a looser, wider world where “order” is a servant not a master. Order is what is discovered after the fact not a little piss pot for us all to urinate into—and call ourselves satisfied. They don’t know what they’re talking about.

(The other “precedent” to a documentary poetry, likely summon’d largely by the Fleurs Animées-anthropomorphisms of its author who portray’d stamen and pistil as bride and groom: Erasmus Darwin in The Botanic Garden) 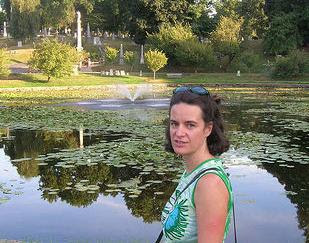