Poetical prose??? Hell/ / The great writing in either p or p consists in getting the subject matter onto paper with the fewest possible folderols and antimacassars. When the matter isn’t real, no amount of ornament will save it. The inner structure is the poetry. And the prose-powtry stunt is merely soup/ lacking the rhythmic validity of verse. (By which I don’t mean the cuckoo-clock of traditional British metric.) Great writer (Hardy) has forgotten he exists. Got his mind on what he is telling.

I love Pound’s recognition of the sort of self-blotting mise en abîme accompanying (spurring) the telling itself (form unconsider’d). And the rhythmic demand (though one’d argue for the rhythmic demand, too, of good prose.) Williams (Kora in Hell):

The words of the thing twang and twitter to the gentle rocking of a high-laced boot and the silk above that. The trick of the dance is in following       now the words, allegro, now the contrary beat of the glossy leg: Reaching far over as if—But always she draws back and comes down upon the word flatfooted. For a moment we—but the boot’s costly and the play’s not mine. The pace leads off anew. Again the words break it and we both come down flatfooted. Then—near the knee, jumps to the eyes, catching in the hair’s shadow. But the lips take the rhythm again and again we come down flatfooted. By this time boredom takes a hand       and the play’s ended.

One recalls Pound—in a tiny onslaught of letters to Mary Bernard, dogging at the necessity of Sapphics: “The tension must be kept, and against the metric pattern struggle toward natural speech.” (Williams’s “come down flatfooted.”) And: “You go on chawin at them Sapphics, with an Alcaic strophe on Sundays. Remember the swat must strain against the duration now and again, to maintain the tension. Can’t have rocking horse Sapphics any more than tu tum, iambs.” (Form / content seesaw: Pound, in a letter to Bernard of 13 August 1934, says both, “Technically you can study music. And apart ca, I think it is mainly a question of what, not how” and “Nobody can do anything about their contents anyhow; it either is or isn’t.”)

Two striking things in Marjorie Perloff’s responses to Sina Queyras’s reviewing questionnaire. One, the evident contempt for the D.I.Y. carnivalesque (and direct) democracy of review tactics in Blogland where “anything goes.” Perloff’s complaint: “most reviews in the poetry journals and on blogs aren’t reviews at all but just little appreciative blurbs. And I especially object to the ‘reviews’ on most blogs, where anything goes. I believe absolutely in EDITORS—editors to assign reviews, editors to ask for revisions, and so on.” Editors to keep the riffraff out. I find it increasingly odd that the loudest promoter of the language boys—they who be constant loud about the (presumably egalitarian) reader’s role in creating the meaning of a work—’d see fit to belittle the “appreciative blurbs” (and catcalls) and call for reinstall’d figures of control. (Any call for “good writing” points to a sense of one’s increasing cultural irrelevancy, it’s a camouflage used to keep the reader off the root issue, off one’s fretting slippage.) The other thing of note: how (apparently) Perloff, a dutiful critic of Yeats and Lowell, “got to” Frank O’Hara after reviewing O’Hara’s Art Chronicles for The New Republic. “That review opened up a new world: George Braziller saw it and asked me if I wanted to write a book on Frank O’Hara.” Perloff, in a 1999 interview (in symplokē), talks (ironically, considering the “good writing” remark) about “academic decorum” (“as academics, we were taught to write a straightforward, coherent prose, where ‘b’ follows logically from ‘a’”) and fills out the story:

My first two books, and certainly my articles for scholarly journals, followed these prescriptions to the letter. When I was writing my dissertation Rhyme and Meaning in the Poetry of Yeats, I used to go to the Library of Congress and ferret out obscure scholarly articles in German that might have something to do with the theory of rhyme. Or, if I wrote on the elegiac mood in Robert Lowell, I began with Theocritus and looked up the etymology of the word elegy and what anyone else might have said on the subject, no matter how obscure the journal. But then in 1975, I was asked, on the basis of an article I wrote for The New Republic on Frank O’Hara’s Art Chronicles, to write a book on O’Hara for the commercial publisher George Braziller. The book that resulted marked a shift in affiliation. Not that I ever quite pleased the publisher who wanted more anecdotes and fewer footnotes, more biography and good gossip and less assessment of O’Hara’s debt to French Surrealism. But in the course of writing Frank O’Hara: Poet Among Painters (1977), I met the deceased poet’s sister Maureen O’Hara Smith and his editor Donald Allen, as well as many of O’Hara’s poet and painter friends, including John Ashbery, David Shapiro, Grace Hartigan, and Norman Bluhm. Some of these became close friends, and through them, I became affiliated with the poetry / art world of New York, although in a minor way. And I must confess that this world seemed (at least at first) much more enjoyable and stimulating than academe. Here people really loved poetry although they couldn’t always say why they loved a particular poem; more important: my new poet / artist friends really cared; they thought poetry and painting made a difference: it was their life, not just a way to get tenure.

Ah, tenure, that antimacassar. Prevents soiling. Though not those homemade (crochet’d or tatt’d) ones. 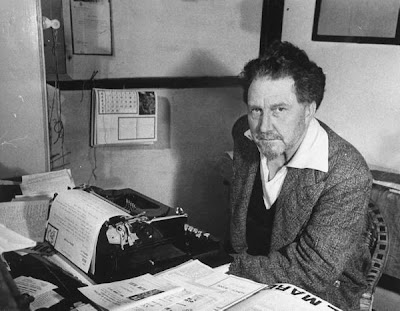