Alan Halsey kindly reply’d to my note about the excellent Lives of the Poets, and clarify’d some of my conjectural hawing:

Actually the work didn’t begin as a collaborative romp, although it’s fine by me to see it that way. I was reading a then recent (2000) hefty biography of Byron & thinking that interesting as it was B’s life as a poet, in the poetry, was sidelined & that this increasingly happens as poets’ biographies accumulate more & more particulars—precisely the opposite of the way poetry works! So I played around with stripping the material back to B’s own vocabulary and phrasing & then tried the same with a few other poets—I saw it as a modest sequence at that time. Then I showed what I’d done to Martin & he joined in & that was when we had the collaborative romp. Eventually Martin got involved with other things & I carried on—or perhaps it was that I’d begun to see it as also a tracking of English as a language for poetry & that was more my bag than his. The potential endlessness of it is a bit dizzying, I’ll probably never really be done with it . . .

And attach’d a new piece, heretofore unpublish’d, about the Jesuit priest, poet, and Catholic martyr Robert Southwell (c. 1561-1595), he of the lovely line “My mind to me an empire is,” interrogated by the Queen’s notorious priest-hunter and torturer Richard Topcliffe, put into a hole called Limbo at Newgate, hung, bowell’d, quarter’d:

if yowe would be unremoved setting-out for Rome
a straunger an outlaw a beggar straightened in our Inglish Colledge
from deathes ante-room I was invited to another place
Having written this Epistle of Comfort where I lay in perills
we have martyr-quellers nowe to make Saints enough
to weep alone for this raging of catchpolls in our Island
to Mr. Cottons in Fleet Street one Mr. Southwell
Chief dealer for the Papists loth Goliath to inforce
apparelled in black rash of right ghostly Fathers
for the apprehension of this penner that laied a few course thridds
so weightye a man hanging ten tymes by the hands
whatsoever bee said to trouble and distemper
drawn uppon an hurdle How great a preferment 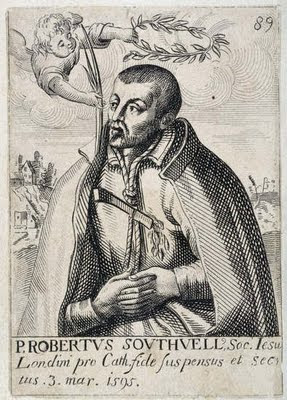 That Halsey’s Lives of the Poet continues in its “potential endlessness” I ought to’ve suspect’d; even in the book’s edition statement there’s mention of “26 signed & lettered A-Z with an additional Life (Chidiock Tichborne) in the author’s hand.” (Tichborne, too, interrogated over possession of “popish relics,” executed for conspiracy to murder the Queen.) Is it instructive to see Halsey’s “Lord Byron” in the light of “stripping the material back to B’s own vocabulary and phrasing”? Yes.

That “sure of nothing so little as my own intentions / I am writing I know not what rhymes” read now in a Halsey’d light, and isn’t there a Halsey collection—is it Marginalien?—dedicated to one “Lancashire witch”?

Out of Geoffrey Grigson’s variously anecdotal and aphoristic The Private Art: A Poetry Notebook (Allison and Busby, 1982):

I suppose that the Fish Crow was the crow liked by Edwin Arlington Robinson, most discouraged, most quietly persistent of American poets, in his seclusion in Gardiner, Maine, where his family lived by trading in river ice.
From Gardiner, 21 April 1897, Robinson to Edith Brower: “I don’t know very much about birds, but I think my favorite is the crow. His song isn’t very valuable but his plumage—to say nothing of his personality—is most fascinating and satisfactory. And then there are swallows.” But the swallows are an after-thought. Did Robinson ever enlarge on that liking for the crow, that solitary of the frozen shore, in black iridescent feathers?
Robinson, to the same correspondent, two years later, in April, aged twenty-nine: “I don’t have trances, furors or ecstasies. My poetic spells are of the most prosaic sort. I just sit down and grind it out and use a trifle more tobacco than is good for me.”
He liked Crabbe, this excellent poet from the ice river; but so did Tennyson.

Relevancies: that Hopkins fixed a sea-anemone along his forehead; that Hopkins climbed down from the jaunting-car and ploughed a furrow; that Eliot slipped off to Early Celebration in a bowler hat; that Baudelaire’s Jeanne Duval was a mulatto; that Pope filled a grotto with minerals; that Cowper watched the leaves falling over Buckinghamshire and wanted to live for ever and ever; that John Crowe Ransom went out to Arnold’s Bagley Wood to listen for nightingales; that Wyndham Lewis liked crême de menthe for its colour; that Auden was spelled by limestone formations; that young Akhmatova ran in a wild way in a torn dress without underclothes along the hard edges of the Black Sea.

Irrelevancies: that Milton, for his fairness (and what else?) was nicknamed the Lady of Christ’s College; that Mathew Arnold wore lavender kid gloves; that Eliot’s throat ran with catarrh, that Louis MacNeice’s finger-nails were black; that Auden of the clear and spare poems drank too much rye and shuffled in bedroom slippers.

Of stories about Mallarmé or record of his conversation, I love the remark he made to the poet Georges Docquois, who had Mallarmé’s cat Lilith—a black cat—on his knees. Docquois was praising Lilith’s armorial air, when Lilith stood up, turned her tail end to Docquois and gently swished the tip of his nose with her tail. Mallarmé then said there was only one thing wrong with this delicious creature: “C’est cette tonsure qu’elle nous montre impudiquement, ce coin nu de sa bestialité . . . j’ai souvent songé à dorer cela.” I prefer that to Eliot and his comic cuts of cats—Mallarmé’s Lilith lifting her black tail and revealing a little round tonsure of gold-leaf.

(from Barnes’s poem Maÿ [William Barnes, named—with Thomas Campion—by Auden as one he prefer’d to all others]) one of the classic admired couplets in our poetry? Because of the conceit of learning; because of the dialect; because the learned have been able to dismiss a poet who lived obscurely, away from the centres of education, as naive and provincial. If so few critics have spoken well of Barnes, it is for lack of taste and courage; and lack of authorization—authorization from other poets, by whom critics are cued. Barnes seemed good to Coventry Patmore, they didn’t care for Patmore. Tennyson approved him, they turned against Tennyson. Hopkins praised him, but Hopkins is a recent authority. Hardy spoke up for Barnes, but critics have only lately accepted Hardy as a poet. Now Auden. I think Auden and a few others will do the trick.

Trying to make your poems lick the arse of posterity is as bad as making them lick the arse of your own time. Either way you twist their truth to yourself—unless hindquarters are your natural habitat. 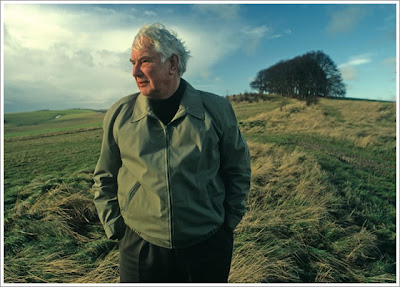 CCXL
A sextant lying in the dirt, point’d to measure the height of
the gods. Isn’t there a story of John
Keats coating tongue and throat with burning cayenne pepper so’s
To apprehend, nay, seize the righteous cold glory of claret? So Hopkins
consider’d it “strikingly graceful etc.” to diadem himself
With a sea anemone. Naturally it stung the Jesuit “with its—base, you call it?”
and deposit’d “a large red scar.”
Buss-sloppy mark of something or other: he tout’d any epithet.
Something in the flux-gunk’d polyp-
Squeeze to engineer any carking kind of ingest, that tentacular suck—
isn’t that precisely
Desire and its discontents? Furious soldiery fastidious against raw
wordy exuberance.

The aching arch of night sky speck’d, meal’d-with-yellow stars, grease-
spatter’d against the crucible-
Hard lid and we burning in the cauldron, the cauldron. Crow-foot’d
bunglers, ape-arm’d, beak’d
Like jungle parrots. The discipline requires it. Dung-fork’d and slop-
Pail’d we march in regimens of sanctity, making something or other of
wordy hellishness. In 1883 Hopkins writes
Letters to Nature detailing the color complexities of numerous
Krakatoa-taint’d (and stupendously tinged) sun-
Departures, mauve of wild mallow, damson plum, anvil-spark’d yellow.
Odd tufts and thin-textured
And plump, he notes, and something like the eggs in an opened ant-hill.
Clouds, he means, or men, Lord-scorny praise-pinching men.