CCXIX
Skeezix Wallet marry’d one Nina
So-and-so and off-
sprung Chipper and Clovia, boy
and girl. He liked oiling
the mower. No gadfly stinging
the curvaceous ample rump of
the horse of lying Capital
he. One in a line
of units of the lovably
ineffectual who brim up out
of American dolt-hardiness—doodad-
goons, the blithe ante-uppers,
goobers and cooters in perfect
regulatory awe of the Republic.
That Republic’s way of exhausting
all ambition to do anything:
see Dagwood routinely sofa’d down
for a midday snooze. He’s
the vizier of the bath,
constantly interrupt’d by Mr. Beasley
or Blondie or neighbor Herb
Woodley, he with the dog-
turd color’d moustache, and cards.
‘If, napping, a man eats
crocodile meat in involuntary reverie,
he is likely to become
a tax collector. If he
lifts tunic to divulge ass
unhamper’d, an orphan.’ So it
is writ by the scribe
Kenhirkhopeshef, a moralist and prig.
Too, he warn’d against beer-
ruffians and slouches, and put
out a comic identikit of
succinct prejudice against the disorderly.
Toppling and swaying like some
enormous sandwich, Capital lies sleeping.

Off up north with a bag of books and a solidly bound sheaf of paper, of negligible format. Pocketknife and pencil stub. To return in ten days or so.

Out of Susan Howe’s brilliant “Choir answers to Choir: Notes on Jonathan Edwards and Wallace Stevens” (in the current issue—54:4—of Chicago Review):

Understanding isn’t something that belongs to reason. Understanding comes to pass as an outward sign of inward grace. The feeling of union and bliss I get while reading “The Owl in the Sarcophagus” is intuitive. Delight springs from the sense of fluid sound patterns that phonetic utterance excites in me. Poetry of the magnitude of “The Owl” comes into being as a running parallel to religious faith—a light unto the world that a reader may experience as distinguishing glory.

In “The Noble Rider and the Sound of Words” Stevens says: “The deepening need for words to express our thoughts and feelings which, we are sure, are all the truth that we shall ever experience, having no illusions, makes us listen to words when we hear them, loving them and feeling them, makes us search the sound of them, for a finality, a perfection, an unalterable vibration, which is only within the power of the acutest poet to give.” What Louis Zukofsky admired most in Stevens’ writing was the words, not the style—the matter, not the manner. Zukofsky said he read Harmonium constantly. Marianne Moore speaks of Stevens’ adjectives as having the force of verbs. For me, immense perspectives of the eye occur in phonically unexpected word order. “This is form gulping after formlessness—.” Often a line is a poem in itself.
“O exhalation, O fling without a sleeve.”

Poetry has no proof nor plan nor evidence by decree or in any other way. From somewhere in the twilight realm of sound a spirit of belief flares up at the point where meaning stops and the unreality of what seems most real floods over us. It’s a sense of self-identification and trust, or the granting of grace in an ordinary room, in a secular time.

There it is: “immense perspectives of the eye occur in phonically unexpected word order.” “An irregular musketry of applause” (Joyce). Poetry is a calling. (“Poetry isn’t calling lately.”) 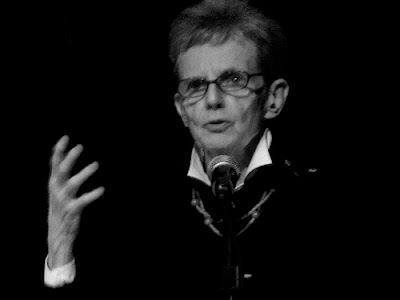