Out of Situations, Sings (Adventures in Poetry, 2008), a book of collaborations by Jack Collom and Lyn Hejinian, a book I “turn to” constantly, something of its rambunctious clarity (“not merely zany”) and purpose (it means to find, and finds means to that end) goads me gently well. Here, lines pluck’d out of “Revival” (done up in, according to the “Postface,” a form “loose, even casual . . . unfolding without any other goal than that of discovering (or generating) the surprises contingent on unfolding itself”):

The point was, it put the fire out. We breathed again, looked about. Nothing
but blue / blue
Depths were mirrored in the blue / blue heights. The driven plenitude
Reminding me of a waterfall laid on edge, nodding off perhaps, but still
radiant of its very definition. Soon
—As “soonness”—the waters, having fallen, (will) flow, defining “down”
—aimlessly
According to strict laws that are nevertheless so tiny dawn throws its hands up
in surprise
As if declaring independence so as to take its own view of things as they
dispose themselves constantly along the stream or on its banks anew
Slowly, in such a slowness, in fact, that the generative point in the heart of
action’s initiation is calm, is as calm as a pebble of granite underground
In contrast to which a drop of moisture in a cloud seems wild
As fire. But it’s winter. The excitement of cold is like that of marriage, in the
pressure
That propels the wind that animates the tree that, just as Lin-yi says, in
achieving nothing achieves everything
At once. The shade alone’s worth all the light that borders it, sometimes more
Tree than shadow of tree and at night neither. As for me, I’m in no particular
hurry
To achieve the general. My split personality only guarantees embrace
Of ambiguity and ambivalence both coming or going through the always-
open windows that at night admit breezes so cold that as I write this
I wear a knitted nightcap
Because it’s too thick to drink. Oh well, I have the feeling house and land are
sliding at a good rate
Back from reality, where events come to pass that were long predicted and
can be regarded in retrospect as having been inevitable, though that’s
not to say that they were destined to happen. Or is it
Not vanity to say that Destiny, like Cleopatra, presents a “poop of beaten gold,”
in contrast to the thick steel plates of inevitability
That reflect the light of the setting sun and bar us from entering
The enlisted mess of “The Golden Vanity” before repetition swallows
distinctions and substitutes metamorphoses for them? Who
Knows (i.e., who cares)? The opaque clouds veiling the sun above seem like
emblems of a state of
Declare passed through a condition of stage, basically a white seed
Of optimism sprouting in the soil of uncertainty.

Which’s got all the marvels of le style Ashbery (particularly of Flow Chart?), languors and hoops made of its own verbiage it then inserts the needle of its going into. (—And isn’t that “Destiny” with its “poop of beaten gold” the name of Hejinian’s ship in “The Distance,” being the “saga” half of Saga / Circus? —No, compadre, the ship’s call’d “The Distance,” too.) In the “Postface” Collom and Hejinian mention how they “opted to communicate by ‘snail-mail’ rather than use a faster technology,” in part “to preserve the unhurried pace of the more traditional, contemplative epistolary space.” (Long unrecord’d ruminant churnings about loss of chances / realms / vehicles for spates of unstint’d mulling, the meek contemplative discharges . . .) One thing I find curious about the pieces in Situations, Sings: how seamlessly meld’d they seem. There is little of that back-chatter that usually occurs in one’s own greasy brainbox at the reading of the majority of collaborations: the talk that says, “Oh, that’s Hejinian there, that’s a Hejinian sentence.” Though, parcel’d out here and there (or drop’d in): jokey half-refs to the duality of the thing (see “My split personality” above). The final lines of “Shims”—the final lines of the book—point there precisely:

Mr. Keats: “Hedge crickets sing.” Any naturalist knows how the hedgerow, the buffer-zone, the borderline where things try to “meet” is rife—that’s where the count erupts, diversity of species, habitat overlap, a place of possibility and doubt, hedging of bets—song sparrow or Ipswich—truth is contradictory. My other prefer’d song in the book is “Wicker”: “The material in the left hand column of “Wicker” consists of quotations from famous, unknown, or purely imaginary, people. Many of the quotations are correctly attributed; some are not.” Reading, then, down, sequentially (though beginning rather randomly):

Here is a sketch of eye-
glasses—two circles joined
by a crossbar—so it must
be a bicycle or maybe two
buckets on a yoke.
(A. R. Luria)

Because there is Friction be-
tween the balls, a cueball
with left-hand spin will
grip the object ball for an
instant and throw it off-line
to the right.
(Robert Byrne)

I burst into tears and
stretching my hands appealed
to the humanity of the
audience; but no one would
raise even a finger to help me.
(Apuleius)

“my own end?” “But the
yellow eyes multiplied,”
“became so numerous” “that
the blackness was covered
over” “by them”
(Alice Notley)

The gigantic eye of Tolstoy
opens and closes many times
and at many doors—a kind
of primitive wooden flicker.
(Barrett Watten)

I see a woodpecker and then
know that my body’s a piece
of wood. I’m stroking the
dog and then I know that this
dog’s gonna bite my feet.
(Dave Van Ronk)

Is it the uncertainty of attribution, or the de-contextual piecework (more accurately, “re-contextual”—there’s obviously a fine mite of selecting and arranging here—how Apuleius’s distress triggers Notley’s “end” amidst the yellow-eyed, witness’d by Watten’s Tolstoian eye banging like a wooden shutter, “flicker” pick’d up—my bet here’s on Collom, who knows birds, doing the detective work, and isn’t “Heigh-ho” as a bastardy of “High-hole” a terrific bird name?—for a lovely raft of vernacular, and the Dave “Stomping Through the Swamp” Van Ronk coming out of who knows where?)—what is it that makes the sequence so live-wired, throwing off sparks? Parallel to it, in a second column (with its own set of “rules”—a 2, 3, 4, 5, 3 number of words per line and an repetition compulsion—“the last line of each stanza is repeated as the second line of the next—setting up an interlinkage that is intentionally tricky”):

reflections moving
to touch at
themselves, so we went
wading in a river with
clear optical echoes

see? see?
clear optical echoes
e-c-h-o
that’s really just one of
them, one of

us, imitating
them, one of
them having turned into
a bird; but it’s turning
out of it

and into
“out of it”
itself—the century lays
an egg; Coyote Chronos cracks,
sucks it up

wonders who
sucks it up,
self-consciousness not being his
impediment to act or age
as it’s ours

I find that rather thin, a little extraneous to the main “play” of the piece. Or maybe the rules too obvious, and too constraining. (The same time: I wouldn’t leave it “out” for a minute. It is the brash rectitude of inclusion that I like in both Hejinian’s and Collom’s work, singly and doubly.) What I long for: the publication of the Collom / Hejinian “Interview” (a big chunk show’d up in the first volume of the Zoland Poetry annual). In the “Postface” again:

Beginning with the exchange of free-verse lines that (some 300 mailings later) became Sunflower (originally published by The Figures in 2000), we gradually multiplied and diversified our projects. Soon, a typical exchange would include ten or so formally different works.
Only one of these works, called “Interview,” is not included in this volume; we anticipate that it will appear as an independent book, a companion (though not a necessary companion) to this one.
Apart from “Interview,” all the poems we’ve composed together to date are collected here. There are eleven of them. 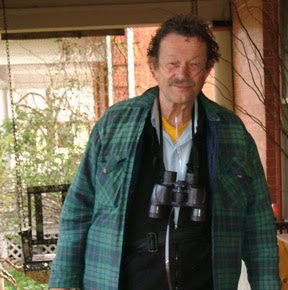 CCXXX
“A series of blind grabs”
is one way, abuttings sans
jointure. That base Hoosier predilect
for the monstrous penny-pegged
to the genealogical. A zillion-
leaf’d tree of rain, my
darling, my paulownia, my figwort.
Assiduous chums, perfect nuts, migratory
souls hunker’d for a spell
along the Wabash. Isn’t walking
a structure of itself, omni-
contiguous and moving? It digresses
the too plausible march, makes
pulling a tendon a pathological
Dietrich. I pull my hat
down low, kerchief up—“a
penurious cinema of thinking, Abu.”
I hurry up the negligee-
bunch’d urine-puddlers, adding naught
to the fat tomes of
hurry, or of story. Beyond
the ectoplasmic slouch of my
benign hoofery through a chaos
of rents, I see something
airy and incapable of tomfoolery.
It is an adjutant, adjutant.