CCXXIX
So the chattering of
the accountants recommences, barkers
and improvident shills, loud
pygmy Houyhnhnms and brolly-
meister Yahoos, dicks with
impeccable cred quick to
explain bad credit scores,
or running mouth sores,
whingers and docents of
the double-entry, replete
with allegorical “standings” cook’d.
Legion the dingbats, legendary
the uses to which
the dingbats get put.
A zig-zag exploding
sun burgled precipitously into
the slots between opening
paragraphs of a book
call’d Dawn Chorus, aimless
décor in heartless array.
Think of Reddy Kilowatt’s
skimp physiognomy of lightning
bolt and bulb nostrum,
made in the jizz
of go-getter mania
that swept the States
mid-Jazz Age. Sol
(meaning sun) Ho’opi’i
swept up out of
Hawai’i to San Francisco,
circa 1922, kept touring
up to the point
he join’d Sister Aimee
Semple McPherson’s Foursquare Church
circa 1938. Count’d amongst
Ho’opi’i’s grand réussites: “Hula
Girl,” “Ten Tiny Toes,”
and the mock-blues
number, “An Orange Grove
in California.” That seem’d
to soothe some itch.

Somewhere in An Elemental Thing, Eliot Weinberger’s serial essay, he tells the Mandaean (Iraq-Iran border, descendents of Noah’s son Sum, venerators of St. John the Baptist) story of “Dinanukht, a half man, half book, who sits by the waters between the worlds, reading himself.” De temps en temps, a “small book named Disai” comes to him with pronouncements, or queries. Isn’t that the story of what one does, “off” by the northern Michigan waters? Weinberger tells, too, of the Mandaean alphabet of twenty-four letters:

Both the first and the twenty-fourth letter are “A.” The alphabet existed before the creation of the universe. Each letter emanated from the previous letter and praised it, until the entire alphabet became swollen with pride. The letters lined up on either side of “L,” the middle letter, as enemy camps facing each other, until the letters realized that without cooperation there could be no language, and they all grasped hands.

There was a young man who couldn’t stand to be separated from his wife when he was away hunting. The other men ridiculed him, and told him to stay home with the women, sewing. An older man, who had lost his own, decided to take the young man’s wife, to see if he would fight for her. In Greenland they do not fight. The young man sat on a large rock for three days, weeping. His wife ridiculed him, and said that he had lost his dignity. So the young man went inland and became a qivigtoq, a hermit, “a ghost who may never return home.” It was said that qivigtoqs become supernaturally strong. They learn the speech of animals, and they are nalussaertok, aware of everything.

Vague premonitory doubts and quivers under a humble no-sun sky. And did one breaststroke fitfully out four hundred yards into Sturgeon Bay at five a.m. one night to float under the vault of heavens and observe the scintillant scramble of the Perseids? No. And did loons bat the laughs back and forth under the cloudbank? A rough great-coat’d eagle in a Stetson and cream-color’d spats bluff its way along the dunes? Oh, all that, “and more.”

The heroics of the bus writers. Out of Charles Portis’s excellent Dog of the South (1979), the trials and methods of one John Selmer Dix, author of With Wings as Eagles:

“. . . Dix never read anything but the daily papers. He wrote books, he didn’t have to read them. No, he traveled light except for the trunk. He did his clearest thinking while moving. He did all his best work on the bus. Do you know that express bus that leaves Dallas every day at noon for Los Angeles? That’s the one he liked. He rode back and forth on it for an entire year when he was working on Wings. He saw the seasons change on that bus. He knew all the drivers. He had a board that he put on his lap so he could spread his stuff out, you see, and work right there in his reseat by the window.”
. . .
“He was completely exhausted at the end of that year and he never fully recover his health. . . . His mouth was bleeding from scurvy, from mucosal lesions and suppurating ulcers, his gums gone all spongy. He was a broken man all right but by God the work got done. He wrecked his health so that we might have Wings as Eagles.”

As Portis is inclined to note: “Idleness and solitude led to these dramatics: an ordinary turd indulging himself as the chief of sinners.” Ah, the writing life!

Arthur Reader Sinsabaugh was an irascible, wacko, Martini-gulping Dutchman—his forebear, Jan Vermeer, had equally crazy taste in red socks—, whose personal habits seemed to have little connection with his austere and superbly composed images of the landscape world. Consider another Dutchman, Piet Mondrian, the cigarette ashes dribbling all over the floor of his Broadway studio and two ears full of boogie-woogie—how do you figure what came out on the canvas? Art is hard enough without hanging ‘Life’ on its shoulder, like some new kind of Original Sin. Forget the rages and the stress. Behind his cameras, Art Sinsabaugh was a lovely and memorable guy, absolutely passionate about photography.

Williams continues with a report of how the Jargon Society arranged to print 6 Mid-American Chants by Sherwood Anderson / 11 Midwest Photographs by Art Sinsabaugh, “now a famous out-of-print book,” roughly twenty-one inches long and seven or so tall, with a note by Edward Dahlberg. And includes a selection of replies by recipients (Lorine Niedecker says: “its size, its horizontal depth absorb me like a mattress.”):

Harry Partch, composer, Van Nuys, California: “Unlike you, I do not have even 2 cubic feet I can call my own for storage, and I tend to resent a gift of anything that I will have to carry around with me the rest of my life—even as good as this . . .”
Paul Metcalf, writer, Chester, Massachusetts: “Yeah, sure, dad, it’s great but what do you do with the bloody thing? I don’t have a Japanese teak table on which to make it Sacred Object of the Month.” (Honorable publisher wrote humble author back, saying: “Suggest shoving honorable object up insolent Puritan fundament!”)
And, last but not least, Edward Dahlberg, writer, Kansas City, Missouri, who was once insulted by Alfred Stieglitz Himself: “. . . . the Anderson book is utterly monstrous. Your emphasis on photography, a lazy stepmother art, is nonsensical. Both the Mid-American Chants and my “Note” are buried now beneath the snows of mere camera-work. So much money spent, and for what—to put into the ground two doomed writers . . . ‘Beware of a weak friend,’ warned Pope, ‘he is far more dangerous than a vehement and doughty foe . . .’”

I drove and I drove and I drove and I drove. It must have taken an hour and a half and as I passed the last hot-dog stand, I realized I was in the country, but so much so, so much in the country, that there just wasn’t anything there, nothing . . . I was looking for what I knew and did not see that which I did not know . . . At some point I became aware of the unbelievable infinite detail on the horizon; this is what drew my attention. So I set about to pursue the distant horizon. I cut the foreground off and part of the sky to accentuate this horizon-line activity. But the more I looked at them, the more I realized they weren’t as full as expression of this great vastness of the prairie as I had wished to portray. I wasn’t aware that I was seeking a peripheral kind of quality in the photographs. I knew that my response to the prairie forced me to turn my head left and right. I would be kind of all taken in by the tremendous sweep before me . . . When I accidentally came across the old Corona 12″ × 20″ banquet camera, I immediately decided this was the camera for me. 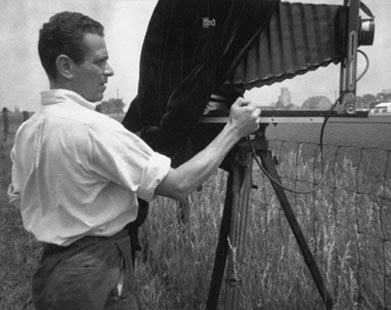 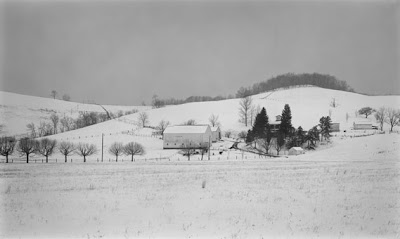