CCXXXVII
Supper of the bitter Gallic salts of dying Europa, while dogs howl out
hominid perturbings, adamant and circling, flea-
Bit and ghostly. Like lingerie hung off the clerestory uprights the night
billows out fronting
A breeze doused with the scent of fennel seeds firing up in the grill’d
sausage, a fork popping little tine-
Provoked geysers, the odor of radiant pep and its clammy disavowals
ritually loft’d.
I so imperfectly recall the somewhat complex story about the Confederacy,
the cost of the soul, chimney
Dampers and increasingly moist underclothes, I dare not attempt a re-
Telling, boozy and decrepit though the audience be.

Getting shut of the vacant phraseology, the doge roger anemia of the
ordinary eruct, “that’s one way.”
The other is caboose in the cabbage patch, shim-whittling for a hobby
And nobody’s horse-thievery without skimming off a goat or a hen,
too. What’s Pound’s dictum,
To refuse to rustle a word “apart from its neighbours”—one way of hog-
tying the conventional whilst
Slowly ripping pages out of the Webster’s, immensity feeding itself
against the inadequacy of
Mere licentious redoubt and its ratifying “kin.” Snatch-rhythm break-
through operaticks, yes.
Alors, répétez: poniard, potboy, pout. Sisyphean, Skeltonic,
skeptical, skew . . .

Some remedial snarling vacancy in the breadbox I balance between my shoulders in lieu of a head. The suck of late summer, its scissoring nightly insect choruses, its porch beers, its accelerant smudge. Barely a red mite scurrying up a half-collapsed stone wall, c’est moi. I read a little “at” that new Pynchon, mrrmff. Maybe I’ll try Steve Erickson’s Zeroville next “for to compare”—movie-addled hero in the same post-Charles Manson L.A. dope-testimonial “era.” Or maybe opt off “elsewhere,” Andrew Lytle, Ross Lockridge, Jr. Restlessness of the damn’d. 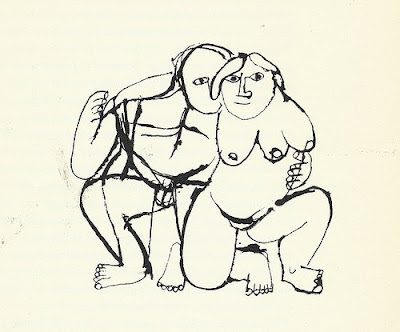 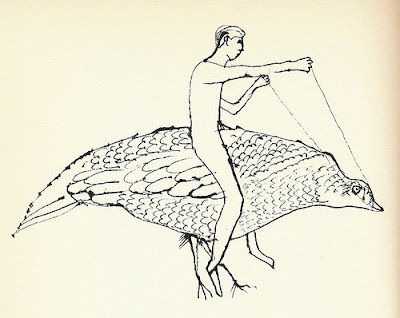 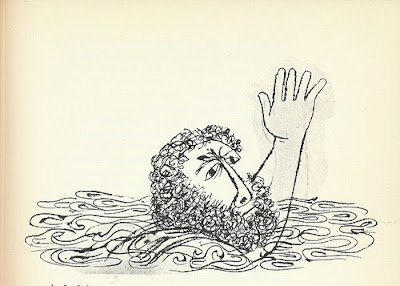