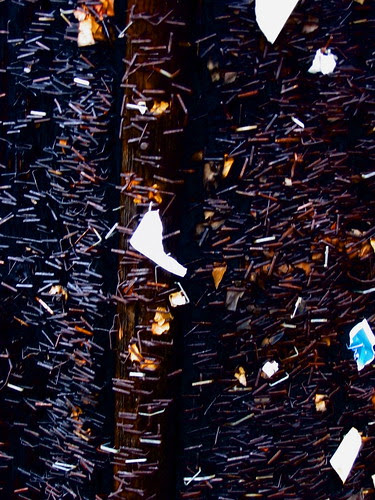 Dog days. Run the vacuum and plop back into a débile sleep. High up in the pulmonary rafters of my right lung a small boy is winding tight a ball of string he intends to make the biggest ever. At the core of it is a rubbery chunk scalpel’d out of the left frontal lobe of my brain. I read vaporously “at” Absalom, Absalom and rotate indistinguishables under my paws at a higher than usual rate. Curious Wallace Stevens snip’d out a 1943 letter:

What a poet needs above everything else is acceptance. If he is not accepted, he is wasting time, so far as his readers are concerned, although not so far as he himself is concerned . . . By being accepted I mean the sort of the thing that is meant when you ask for a book by so-and-so. That this element is lacking in my own case is demonstrated by the fact that no one seems to enjoy the poems. Apparently you feel that I am satirical, but I am not. No one could be more sincere than I am about poetry.

Acceptance meaning a degree of predictability? Meaning not having to wonder where—or if—one’ll ever see fit to get one’s work into print. My ability to think about acceptance limit’d to the degree my intellectual capacity today equals that of a piece of toast: I accept that. I accept the falsity of saying “there’s a viceroy fanning itself on the Echinacea” when it’s clearly a monarch, all to pull the diphthongal i up out of the first a in Echinacea, to southern it a spell. I accept the story of the stem borer the neighbor tells, how it’s doing in the elderberry, browning its leaves mid-summer. I accept the hog-squeal of a chainsaw cleaving the still bedusk’d air, dumb over-tool’d city folks: halving a limb a ripsaw’d make quicker work of.

“Acceptance” is an intangible, a slippery bait. Accepting the rôle of laughingstock. The rôle of oddsbody. The rôle of coot. The rôle of gadabout. The rôle of gadfly. The rôle of prick. Used to be one’s finest efforts bust’d forth out of contempt, a sneering precisely at the foul “acceptability” of all that surround’d one. (A sort of sassy “war is the health of the state” refusal to do whatever is expect’d of one, even when it’s expect’d that one’ll go terminally sassy, so one pulls up short with a kind word, as supercilious as a slingshot, as governable as a kite.) It is also the case that “acceptable” is the mark of the majority hootings in any age, aim of the monstrous mediocre, darling of the yea-sayers, defines the period style. Oh to be willing to gun the engine of one’s contempt forth ceaselessly, spinning one’s tires in the ever-deepening ruts of one’s unacceptability! Everyone’ll grow tired of that hog-squeal sound, and leave. The way it s’posed to be. Some confederate’s of late making noise about “the crises” in poetry, the one “in,” the one “out,” all heady breathless stuff ending with “weapons”: another political ploy and gimmick, always “newsworthy,” good “copy.” Follows the script of the most recent criminals in the White House to a T: alarmist juddering’ll always distract attention off of the outstanding unrehearsed inadmissible failures of what’s gone before. Poetry exists in zones without crises, in the interstices, off behind the hen house, under the floorboards, up in the canopies, in the backwash, zones in continual roil and havoc where time’s outward and inward motions are indistinguishable, where the only sign of too proud human trajectory and effort and ambition is mark’d by untoward ripples in the drifting black silt that plays along the passages, and the acceptable goes loudening down into empty caverns like a tossed away stone, and no need or cry to rake that echoing unbidden noise up as hazard or sign, nor—damn the gods—as some foul aesthetic to prop up one’s lazy sniggering, one’s vamp larking, one’s ethical rascality. (Oh Faulkner, that rascal.) An idiotic stunt, to cleave to a style stuck to (unburdened of oneself into) by simple reading. Spinning in that rut. Though: No one could be more sincere than I am about poetry.

A rationalist I am, you see by my square hat. A “hopeful monster” (now there’s a Stevens title, no?) “One of their distinguishing marks might be that they would not want to destroy.” Is how Nicholas Mosley puts it. I see where there’s out now a critique of the endless tantrums of art. Of the endless saleable identical claims to outsiderhood. Derrida’s il n’y a pas de hors-texte become il n’y a pas de hors de commerce, nothing’s not never unsaleable, for the point of outsiderhood, when outsiderhood becomes duffer’s credence for art, is saleability. The new motto’s I, too,’ll be a horse’s ass. Endless markets, a pure self-satisfying manufactory of scorn, grown up out of a nihilism no longer autochthonous, but self-aware, plaintive, cuddly with its fiduciary cohorts. Is that a crisis? I doubt it. At least I am unmoved by the machinations of it. I find crisis in the bewilderment of Stevens that: “no one seems to enjoy the poems,” there. In the doubts of the painstakingly able, in the collisions of individual talent with the posses of self-proclaim’d outlawry. As the Ingres (either the harem’d up “La petite baigneuse” or the plainer “de Valpinçon”) knockoff in one Frank O’Hara / Joe Brainard comic—“Hard Times (After Dickens)”—thinks: “I just hate men who fantasize about me—they’ve been phonies for—ah, centuries.” And as the (same comic) male buttocks hard at “work” “say,” “A central nervous system has to put up with a lot.” And as the (same comic) increasingly scratch’d out figures say: “But am I truly relating—I wonder if I truly am—” and so on into a narratively “earned” blotto-mess with “All narcissists seem to be such slobs!!!” for end-tag.

De toute façon, writing’s just my violon d’Ingres, and my ardor for it’s that of an amateur. I accept that. 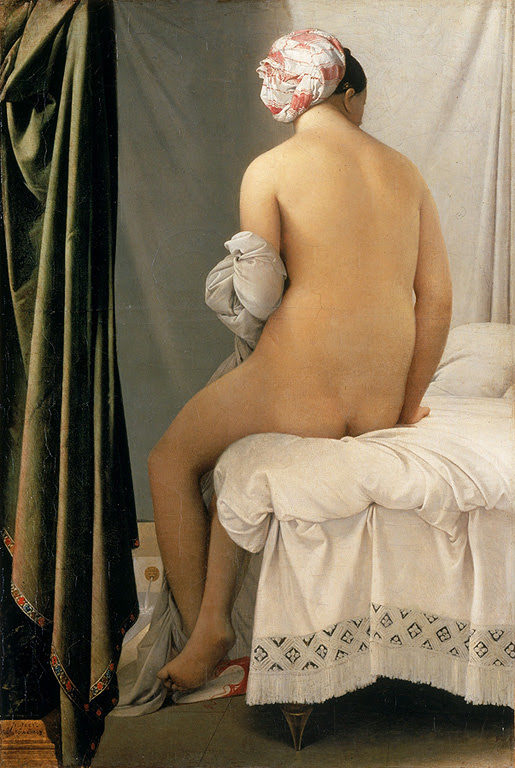