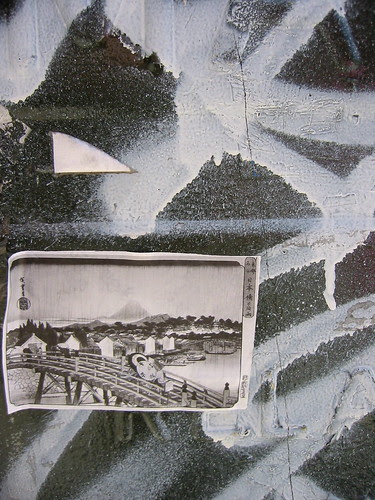 Finish’d Faulkner’s Mosquitoes. A drab perspiring Fourth of no accomplishment. Standing in front of bookshelves, idly pulling down odd volumes, in a mirey of a fleet skedaddle of whatever “passes” for thinking. Meaning, a disorder, a restlessness, the taxonomy of “between books,” “out of sorts.” (A typesetter’s term.) (So is “dingbat.”)

That’s my hooded lizard eye on the cover of Empire of Conspiracy: The Culture of Paranoia in Postwar America. It’s a book I never read (copy sent gratuitously—“if they uses a body particular, they’s obliged,” is how that law goes), though here “within” I see Kathy Acker (out of the 1988 Empire of the Senseless) saying:

Ten years ago it seemed possible to destroy language through language : to destroy language which normalizes and controls by cutting that language. Nonsense would attack the empire-making (empirical) empire of language, the prisons of meaning.
But this nonsense, since it depended on sense, simply pointed back to the normalizing institutions.
What is the language of the “unconscious”? . . . Its primary language must be taboo, all that is forbidden. Thus, an attack on the institution of prison via language would demand the use of a language or languages which aren’t acceptable, which are forbidden. Language, on one level, constitutes a set of codes and social and historical agreements. Nonsense doesn’t per se break down the codes; speaking precisely that which the codes forbid breaks the codes.

Aiming largely at Burrough’s “cut-up” methods, applicable, one thinks, to all the sorry derivatives of such that push up out of the swol’n earth regular ’s mushrooms after a rain, and with comparable nutritional “value.” (Though, too, is Acker’s argument foolproof? If cut-up “sense” (“nonsense”) points to inevitably back to its sensible source, isn’t it also the case that “speaking precisely that which the codes forbid” is meaningful only in relation to the flaunt’d codes?) I admit: the “taboo” barely moves me, likewise the “unconscious.” I am attract’d mostly by the “speaking precisely,” seeing in that (its terrible lack) the sad ignoble gabble of “us” “here” “now.” Writing against the lying and the brutal impercipience of the “era.” (Though: how do that and maintain a necessary receptivity, how do that without becoming “engrained,” absolute, dogmatic, shrill?)

Burroughs talks about (in “On Coincidence”) how, walking about, attending to things, “the world”—“You will observe that what you were thinking about just before you saw the sign relates to the sign. The sign may even complete a sentence in your mind. You are getting messages. Everything is talking to you.” Which betrays an enormous narcissism (that writerly thing). Which is used to argue that a “person” exists not as a solitary thinking machine, but as a node in a communicatory grid (subjectivity turn’d off, &c., &c.) Which seems utterly familiar (I rather like the challenge of making whatever comes within reach part and parcel of my “communication,” (I am always communicating (I am utterly narcissistic))). Which sheers off “speaking precisely” in lieu of “speaking erringly.” Which is what writers do, pursuing the gimcrack baubles in the mists, wrench’d around by bathos, by any new light shining up, a mountain where a lake stood, you know the ropes. Addictedly. Obsessedly. (David Foster Wallace writes of how “substance” addicts may also be “addicted to thinking, meaning they have a compulsive and unhealthy relationship with their own thinking . . .”) Isn’t it the case that most writers I admire (admit to my mirey) be obsess’d, addict’d, “worse”? Enough. The work ship arrives. (“Down out of the succulent clouds.”)

Faulkner’s Flags in the Dust begun. A sentence:

There were once crepe-myrtle and syringa and lilac and jasmine bushes without order, and massed honeysuckle on fences and tree trunks; and after the first house had burned these had taken the place and made of its shaggy formality a mazed and scented jungle loved of mockingbirds and thrushes, where boys and girls lingered on spring and summer nights among drifting fireflies and quiring whip-poor-wills and usually the liquid tremolo of a screech owl.

Faulkner’s precise naming, knowing the bird noises (“liquid tremolo” is perfect). I must’ve sought out “perspiring” (and “mirey”) out of that “quiring”: the sign relates to the sign.