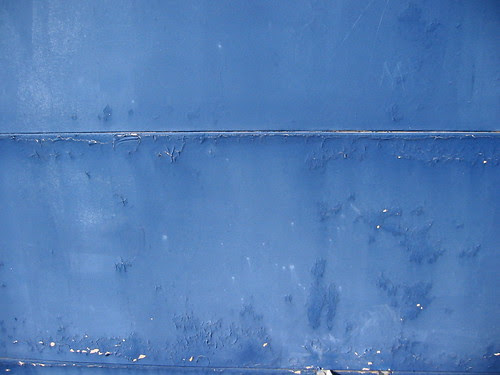 Movement here and there. One night in a shack-row style motel, big stink of Lysol, unlock and bang into the bed, toothy joviality out of the grease-spot’d proprietor, I expect’d to see Cormac McCarthy bleary out pomaded the next morning with a crush of manuscript in a paper sack, the one he’d carry’d a bottle in in the preceding black’st night. Effect of reading a couple of pages of Darren Wershler-Henry’s The Iron Whim: sleep coming down like a sledge. A concert in the piney woods (Interlochen Center for the Arts)—Joshua Bell ripping into Max Bruch’s Violin Concerto No. 1 in G Minor, with Jung-Ho Pak conducting the World Youth Symphony Orchestra. Bell playing with a kind of controll’d fire (one never consider’d anything’d burst, one’s heart—tant pis—never leap’d up into the danger zone of possibly throttling one’s own throat, for all the pyrotechnics though). Bell did play with ferocity exceeding the usual, egg’d to it by the big, loose, mouth-aid’d, wild propulsive choreography of Pak, a nigh-unpardonably energetic conductor, reaching high to hover a tremolo, pushing it down to a sob, flinging out a monstrous right arm flailing to muster forth a sweet-temper’d bray of brass, turning to the half-snarling black figure of Bell, to mock him, to push him, Pak white-shirt’d, tipping Bell’s weightier rips aloft, balloon work, or summoning the full orchestral beast to quash Bell’s nimble attempts to caper off up the scales into the whim-pickled registers. Yeah, that’s how it went. Remind’d, for a few precarious moments, of, say, Richards and Jagger making monkey-faces at each other, each daring each to break or continue the spell. The voodoo of music. And periodic cahoots: Bell’s tiny elision-smiles, nods to the principals, keeping it whole.

A bizarre moment in the clatter of usual pre-concert self-congratulatory gesturing. A man summoning Dana Gioia to the podium with the usual high chthonic (feign’d funereal tone) adulatory rubbish. Prick’d up ears, and out of what I recall—x, y, z stack of accolades and titles, blah blah blah—heard something pointing out, too, how “politically astute” Gioia is. And Gioia strides forth in khakis and blazer and begins speaking like a Britisher or a yacht-owner. Bizarre, like an Italian hoyden convinced that he is waspier than a hornet, going all clip’d and nasal. Okay, we all do the masks. Except, he, Gioia-the-politically-astute sounds like a drunk. Meaning, after pointing out how proud he is to be at Interlochen, he makes it exemplary: for one, it’s “intrinsic excellence,” and two, “the importance of it as a model for the importance of a curriculum of arts education important to an important national sense”—some gobbledygook like that, nigh squirmy-making for its extempore breakdown. “Politically astute” apparently means “talks like a politician,” cotton-mouth’d with intangibles, and marble-mouthing meaningless zero-abstracts.

Finish’d As I Lay Dying. Perfectly and unrelievedly grim, a Job story. And is it a wrong note there in the final paragraph when Pa shows up with “Meet Mrs Bundren,” the new wife? That’s a stumper. No prior inkling of it. Faulkner’s distrust of words, the limits of language in the mouth of the first Mrs Bundren:

That was when I learned that words are no good; that words dont ever fit even what they are trying to say at. When he was born I knew that motherhood was invented by someone who had to have a word for it because the one that had the children didn’t care whether there was a word for it or not. I knew that fear was invented by someone that had never had the fear; pride, who never had the pride. I knew that it had been, not that they had dirty noses, but that we had had to use one another by words like spiders dangling by their mouth from a beam swinging and twisting and never touching and that only through the blows of the switch could my blood and their blood flow as one stream.