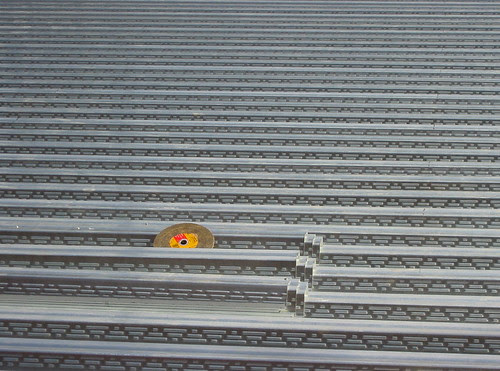 Darren Wershler-Henry’s The Iron Whim: A Fragmented History of Typewriting is precisely the kind of book to sop up the illimitable travel run-off, that sedulous (seducing) fluidity of focus, that random ease into “upstanding” somnolence, that breezy hayseed rhythm. (All, too, a result of being “between books.”) Skimming around in it, I land (mid-book) twice here:

Consider the sentence “Amaranath sasesusos Oronoco initiation secedes Uruguay Philadelphia.” The meaning of this sentence has nothing to do with the normal logic of syntax and everything to do with the logic of how the letters appear on a typewritten page. It was usually the first thing ever typed on each new typewriter, and its sole function was to check the alignment of a typewriter that had just rolled off the production line before it was shipped. Unlike most sentences it was rarely spoken, and no one particularly cared what it might mean in the conventional sense.

Which immediately recalls another bit of nonsense—pure materiality, what “type” is all about—Hugh Kenner’s opening paean to “Etaoin Shrdlu” in The Mechanical Muse:

You never see Etaoin Shrdlu in the newspaper now [“now” being circa 1987—newspapers’d long abandon’d linotype composition]. Time was when you’d come across a whole line of print—

—where you saw how the linotype operator had botched the start of the line (“Rsoovelt”). Then his shortest way to get the botch out of his machine’s system was to fill out the line with nonsense, and cast it like any other line, intending the throw the cast slug away the instant it was cool enough to handle. But he’d get distracted and forget to throw it away, and if proofreaders got distracted too the line ended up in the paper.

And why that particular P. Inman-like (or the David Melnick of PCOET-like) species of nonsense? Mechanics. The linotype operator’s “quickest way to obtain nonsense was to run his finger down either of the two leftmost columns of his keyboard, triggering ETAOIN or SHRDLU in that order.” Mechanics that put the commonest letters in a bunch so’s to allow the brass matrices select’d by each punch of the keys a shorter traveling distance than the rarer letters—the mechanics of efficiency determining the arrangement of keys.

Wershler-Henry’s sentence provides its own efficiently mechanical trial (human eye viddying up the evenness of the sentence’s keel)—that’s its raison d’être. He writes:

“Amaranath,” the misspelled name of an imaginary flower, checks the alignment of the vowel “a” between a number of common consonants. “Oronoco” checks the “o” key, while “secedes,” “initiation” and “Uruguay” check three vowels that are among the most commonly used of all letters, “e,” “i,” and “u.” “Sasesusos” not only compares four of the five vowels in the same word against the baseline of the letter “s,” but also “includes several of the most common letter combinations in twentieth-century business English.” “Philadelphia” checks the horizontal alignment of “i” and “l,” the narrowest letters on the keyboard.

Such a vowel-heavy vocab puts one under the considerable press of Christian Bök’s Eunoia (or perhaps it’s some rude Canadian oulipovian Pavlovian response, a vowel-trigger’d salival romp), so I look in the index under “B.” Only to find one Edward Bok, “editor of the Ladies’ Home Journal and himself a former amanuensis” to Mark Twain. Bok is asking Twain for “a whole autograph letter,” with a weather-eye out, no doubt, to posterity (read: prosperity). To which Twain responds with a sheet “in full typed gothic capitals” (early type-machines being unable to produce lower cases), “signature and all.”

Off into the nineteenth century gloaming, pondering machinery, its palpable knurl and satisfying push. How easily one’d disassemble a typewriter, or simply dig the accumulated ink out of its keys. That satisfying release of an impact’d half-sphere out of an “o,” popped out with a pin. The pleasing clatter and line-ending ding, the high thin screech of the roller if one yank’d free a (spoil’d, Rsoovelt’d) sheet of paper. I always peer’d into its maw. Admired the constant angular attack of the keys. I compared it to racing a car, accelerator jammed home, eyes pinned to a rather narrow width of two-margin’d action. Action writing. Beast with a machine. Inevitable bourbon tumbler sweating myriad rings on the table. Stub out cigarette and expel smoke into the maw, fingers landing precisely, the tree toad’s spatulate suct-cupped toes finding the leapt-for limb. Is it Wordsworth who pieced together “Tintern Abbey” whilst tramping, return’d to scribble it, finish’d, down? Yes, I allow that: the body ahum with itself, priming the machinate mind. The body imposing itself in the composition. And now? With the slithery lizard-tick of keys, the bland effortlessness, the maw a flat deniable blankness? Should one compose to the metronomic blink of the cursor? (It is adjust’d to the beat of my heart.) I return to the scribble sheets of my boyhood, the assembling of execrably script’d lines off tiny scraps. (Though I “compose” Isola notes “straight.” (Though I do it in stolen swatches, “on the run,” under the lash of that goon, the taskmaster Time. Hence the muddy irregularity of “tone,” the corner’d shrew in combat “voice.”))

Clarity of morning. (Though what sentence beginning the “Hath . . .” dangled above me like a spider whilst I slept?) All the romantic gush about the typewriter: returnable to Jack Kerouac who used to attach an “F. P.” to ’s signature: “Furious Poet.” It’s easier to be angry (when) “at” a typewriter, easier to bang away loud and long and brash (with a modicum of control—less danger of final illegible paper-puncturing spastic handwriting emerging). When Kerouac rent’d that Underwood in Hartford, Connecticut, he (right off, spur’d to disgust, finally identifying as writer—“I am grown dead serious about my letters, my work, my stuff, my writing”—he could hardly say it enough ways—) machine-authentic, wrote: “America is sick as a dog, I tell you.”

Clarity brook’d: “America is sick as a dog, I tell you.”