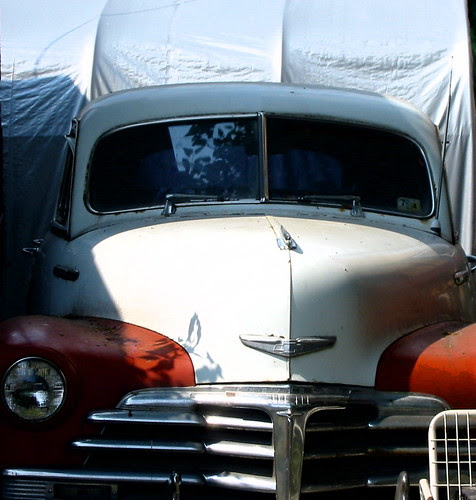 A funny thing to stop writing. Nary a word for ten days. No notes. A little reading (Faulkner, nights, under a bulb the size of a thumbnail, or an epiglottal flap.) No photographs. Lazy squinch-eyed sun-passivity. Pawing through watery pebble heaps. Lackadaisical walks here and there aimless. Severe looks across the bay towards Old Mission. (Severe thunderheads black-browing back.) Long stretch’d-out breast-stroking lengths in the shallow East Arm waters. One morning helping man the seine: killifish, shiners, one tiny (four-five inch) prehistoric-looking long-nosed gar, an (invasive) round goby. (Hitchhiked in in ballast water in the ocean-going tankers.) Bald eagle above the red pines.

Faulkner, in Flags in the Dust, with a hint regarding how one must (noisily) proceed: “Shakespeare had no sense of discriminations and no instinct for reticence. In other words, he wasn’t a gentleman.”

One excursion into Traverse City to fossick amongst the remainders downstairs in Horizon Books. Bought a copy of Burton Raffel’s 2004 Pure Pagan: Seven Centuries of Greek Poems and Fragments, mostly for Guy Davenport’s introduction:

Burton Raffel calls these Greek poems “pagan” because they were not written in Chicago or Aberdeen. Pagan is defined by Samuel Johnson as meaning “heathenish”; both words, pagan and heathen, mean “living in the country.” The Greeks, like all civilized people, felt that country life was more authentic, more earthy and forthright, sexier and healthier, than life in the city. It was more natural. So these poems are pagan because the past is another country. The pagan is always other, over yonder, or way back when, interesting because different.

And Davenport recalls how Greek lyric poetry emerged rather late, “and counts as a salient inspiration for modern poetry,” naming (along with obvious imitators H.D. and Pound) Edgar Lee Masters’s 1915 Spoon River Anthology as a “conscious imitation of the epitaphs in the Greek Anthology.” Raising Masters to Pound’s level, unwilling to make silly distinctions based solely on supposed formal excrudescences. Davenport provides, too, a succinct definition of Pound’s word paideuma:

The Greek word that means “the content of a culture” . . . what you know just by being a Greek, a Dogon, an Icelander. All the tacit assumptions of daily life constitute paideuma. So poets compose for an audience that understands them. This dimension of difference is what Burton Raffel is calling “pagan.” Difference creates information; that is, the crossover from what we know to what we don’t.

And what if the culture is so completely (in myriad ways) fractured that all tacit assumptions are off, bungled, contradictory, botch’d? What if audience is so shrunken, “difference” so enormous, and crossover so negligible that any paideuma (Davenport notes that the word derives out of pais, “child”—it’s not a culture of specialists or experts that’s refer’d to) attributable to these States is shallow, disputable, penny-ante, of little worth?

Idling south, late afternoon on the two-lanes. Grawn, Buckley, Mesick, Cadillac, Farwell, Clare, angling for one of the “dual carriageways” (a term that persists in my lingo for unfathomable reasons, a British-speak excrudescence out of my hitchhiking years). In some peculiar way thinking about “audience”—meaning: I see the hand-letter’d signs for firewood for sale, for lawn mowers sharpen’d, for nightcrawlers for sale, for “fill wanted”; I see motor vehicles of all kinds prop’d in the greenswards, park’d in the ditches, angled against the barn; I see innumerable garage sales, yard sales, flea markets, “antiques,” junk yards and junk sales: the paideuma of the backroads is the swapping of junk. Literacy of cash. Literacy of the drive by. Literacy of the money clip. Literacy of the shrug and spit and scuff boots in the gravel. Literacy of the satellite dish and the remote. Unbridgeable distances.

The story of Faulkner’s marking up (three-color coding) a manuscript of Benji’s discourse in The Sound and the Fury. An intend’d (color) printing gone astray. Said manuscript gone missing.