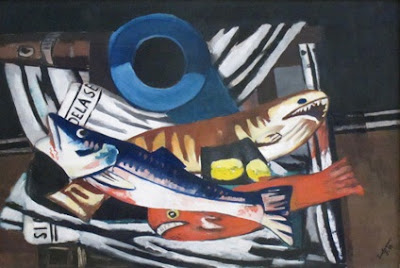 Rereading early O’Hara, the impersonal pieces wherein the dogmatism of hard surreal is tempered by loose and veering syntax, thinking of two pieces called “Elegy,” each—according to Allen’s notes---“Dated New York, April 1952,” and each, too(“‘Beckmann still life with fish’ written below” and “‘Klee fish still life’ written below” according to the notes), coming out of O’Hara’s looking at paintings. One:

mercilessly, while the sun went out
and the moon sank into a bathos, the
music of the spheres, the deafness of
the heavens we look to for a breather.

Accept, o almighty Dead, the tribute
of our kicks, in the impassioned loosenesses
of your gravel sarongs, and accept
the multifarious timidities of the youthful

whose eating has not yet crystallized
into the compunction of the verdant skies.
Accept the salt seas flowing from our own
precious organs, the whirling notes

which may seem savage to your supine
majesties yet is the fugal diadem
of your dirty virginities. We were lovely.
Now lay for your upon sidereal simplicities.

The high anthemic exhortatory voice of “Accept the salt seas flowing from our own / precious organs . . . savage to your supine / majesties yet is the fugal diadem / of your dirty virginities” premonitory of O’Hara’s 1955 “For James Dean” (“Welcome me, if you will, / as the ambassador of a hatred / who knows its cause / and does not envy you your whim / of ending him”). Is the Max Beckmann painting the 1927 Großes Fischstillleben (for its “savagery”) or the 1944 Stillleben mit Fisch (for its “heavens”) or neither? 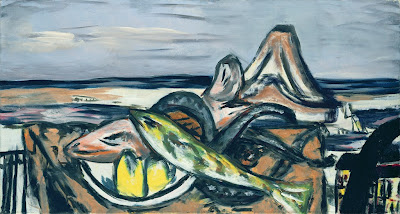 Seemingly no unmistakable cue in the writing itself. (If the painting is incidental to the writing, why O’Hara’s identifying note “written below”?) In 1955 O’Hara wrote a short review for Art News of a Max Beckmann exhibit (reprinted in the Bill Berkson-edited What’s with Modern Art?), therein noting “the grandeur and intensity with which [Beckmann] looked upon occasional subjects, landscapes, portraits, equal to that of the better appreciated mythological pieces” and suggesting that Beckmann’s sensibility is “seen to great advantage” in just such pieces, “without distraction of a literary nature.” Pertinent to O’Hara’s early pieces here, their unabashed “thrust” and “loosenesses.” (Sense of O’Hara’s unfettered lack of compunct: he isn’t to be concerned with “the supreme price of love”—literary propriety a kind of debt owed—he’s going for the “sidereal simplicities” of something audacious beyond all that, hence “the tribute / of our kicks . . .”) Two:

Salt water. and faces dying
everywhere into forms of fish.
Be unseen by the abandoned flying
machine near the jetty by the bird’s
wrist on the empty cliff crying!

From beyond the Atlantic beyond
the sand dunes’ leonine crouch
not a mast thrusts up its nose
on the sky’s pillow. The mean slouch
of fishermen wakes the falling vagabond.

And our love. it follows them
heaved like dung by tridents on
the ocean floor, our famous men!
and breaks our heart the ascension
to the sea’s ferocious surface! then

escaping never into that realm
of shining, the perfect configurations
the Bear of desire! Could we o’erwhelm
all earth with our heroes these lacerations
still, these waves, gnaw down our helm.

Avoid all grand posturing, it is for naught. Astounding to read—to accompany the rereading of early O’Hara in all its brash tenuity—O’Hara’s 1954 note regarding Klee (What’s with Modern Art?):

Paul Klee . . . is fortunate in never having done a major work; each individual thought as it comes to us trembling with wit and sensibility seems to be all of him. Almost. What a show of this variety (small pictures 1915-1940 in mediums ranging from oil to ink) makes one feel is the longing for one complex work: the pictures themselves seem to have gathered together from the ends of the earth to assemble a more complete memorial to their creator’s psyche, like dutiful children on an anniversary. When they go away again they will be individuals, but for now their family resemblance is very strong. Some of them are beautiful and amusing, others are phlegmatic and puerile. Despite the diversity of technique and whimsy in his work, Klee had only one expression: his most brilliant insights are never stunts, but they are the same in quality as the truism and the over-relaxed platitudes of the bad pictures—it is just that they know more and are not weakened by overstatement or restatement. His constant nagging at the attention by petty and often vapid titles is a sign of his own nervousness and of a documentation which is perhaps too thorough; he had made himself too accessible.

(And one thinks of O’Hara’s refusal: all the poems he called “Poem.” And of how, reading the early works, one notes the lack of “one complex work,” not, arguably, to arrive before “Easter” with its fecundity invading the very heavens: “to be pelted by the shit of the stars at last in flood / like a breath.”) Again, “Elegy (Salt water. and faces dying)” escapes its painting (“escaping never into that realm / of shining”). Is it possibly referring Klee’s 1925 “Fish Magic” or the 1926 “Around the Fish” or (again) neither? The exterior scenes (“abandoned flying / machine near the jetty”) put it beyond the usual thrall of the Stillleben. And again the starry yearnings out—“the perfect configurations / the Bear of desire!”—referring undoubtedly to Ursa Major, the Big Dipper—countering the “mean slouch” of earthly humdrum. 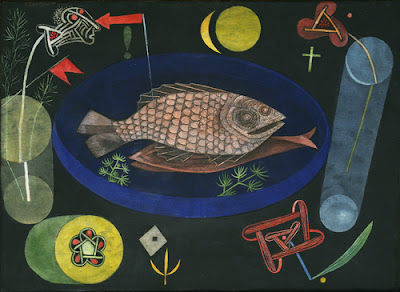 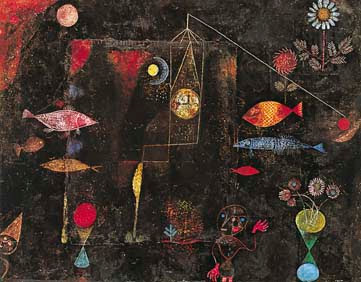