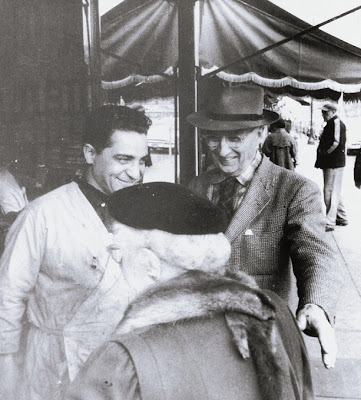 The usual finicky air-popping (sense of ravening molecules banged about by unending local breezes) state: some combo of sleep-lack and desuetude (what Dr. Johnson calls, awkwardly, “cessation to be accustomed,” and quotes prognosticator Richard Allestree’s 1667 Government of the Tongue: “We see in all things how desuetude does contract and narrow our faculties, so that we can apprehend only those things wherein we are conversant . . .”), a pre-expiry feeling of neglect and relief. Two loud booms and a single high-pitched straggler: “whyn’t you leave the fuckin’ crows be?” (Jamming here in scant December, with offerings likely to go scanter: fault of the accrual of short days, the seasonal meager . . .)

Disliking the tawdriness of unnecessary explanation, the detracting compulsory connective, stock speech of any kind, he sets the words down, “each note secure in its own posture—singularly woven.” “The senseless unarrangement of wild things” which he imitates makes some kinds of correct writing look rather foolish . . .

“Each note secure in its own posture—singularly woven” (a line reminiscent of Sir Philip Sidney’s “not speaking . . . words as they chanceably fall from the mouth, but peyzing each sillable of each worde by iust proportion”) out of Williams’s “Trees” (. . . the long yellow notes / of poplars flow upward in a descending / scale, each note secure in its own / posture—singularly woven. // All voices are blent willingly / against the heaving contra-bass . . .”—lines that seem to prefigure the opening of “The Descent”: “The descent beckons / as the ascent beckoned. / Memory is a kind / of accomplishment, / a sort of renewal . . .”). “The senseless unarrangement of wild things” out of “This Florida: 1924,” a piece addressed to Wallace Stevens:

But I am sick of rime—
The whole damned town

is riming up one street
and down another, yet there is
the rime of her white teeth

the rime of glasses
at my plate, the ripple rime
the rime her fingers make—

the stupidest rime of all—

Against “rime” Williams poses a fine quandary of oranges—“orange / of ale and lilies // orange of topaz, orange of red hair / orange of curaçoa / orange of the Tiber // turbid, orange of the bottom / rocks in Maine rivers . . .”—seeing’s wild formal onslaught poised against rhyme’s genial denial. I think of O’Hara’s 1955 piece “Radio,” its “orange,” too, signaling an inadequacy of what “the ear can hold”:

Why do you play such dreary music
on Saturday afternoon, when tired
mortally tired I long for a little
reminder of immortal energy?
All
week long while I trudge fatiguingly
from desk to desk in the museum
you spill your miracles of Grieg
and Honegger on shut-ins.
Am I not
shut in too, and after a week
of work don’t I deserve Prokofieff?

Well, I have my beautiful de Kooning
to aspire to. I think it has an orange
bed in it, more than the ear can hold.

Of note: Moore’s removals. In its original, the review—called “‘Things Others Never Notice’”—begins:

Struggle, like the compression which propels the steam engine, is a main force in William Carlos Williams. He “looks a bit like that grand old plaster cast, Lessing’s Laocoön,” Wallace Stevens says in the introduction to this book. And the breathless budding of thought from thought is one of the results and charms of the pressure configured . . .

Struggle is a main force in William Carlos Williams. And the breathless budding of thought from thought is one of the results and charms of the pressure configured . . .