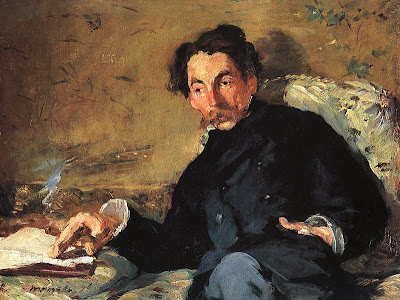 Balmy for December, and damp. Premonitory vatic exordium of pinched light in the east. Uneasy, and, frankly, bicycle-exerted, hot. Mallarmé (out of “Scribbled at the Theater”):

There is (we’re poking at the fire) an art, the only or pure art, according to which uttering signifies producing: it shouts out its demonstrations through its practice. The instant the miracle happens, to say even that it was that and nothing else, will invalidate it: so intolerant is it of any evidence other than existing.

The unutterable ineffability of the pure unsung word itself, its boding intransigence, its sheer incipience. Repeatable maestro. I recall Marianne Moore (“Idiosyncrasy and Technique”): “Odd as it may seem that a few words of overwhelming urgency should be a mosaic of quotations, why paraphrase what for maximum impact should be quoted verbatim?” Or the perennially primordial voice “poised to incept” here (out of Lyn Hejinian’s The Book of a Thousand Eyes):

The mock-jauntiness of Hejinian’s romp here—a world seemingly proliferating and replete prior to agency—“I’m almost ready”—isn’t it akin to Williams’s fiercer reproaches to the failures of art vis-à-vis the copious and impalpable moment, the now? Spring and All (1923)—beginning, wryly, punningly, “If anything of moment results—so much the better”*:

The reader knows himself as he was twenty years ago and he has also in mind a vision of what he would be, some day. Oh, some day! But the thing he never knows and never dares to know is what he is at the exact moment that he is. And this moment is the only thing in which I am at all interested. Ergo, who cares for anything I do?

And: “. . . nearly all writing, up to the present, if not all art, has been especially designed to keep up the barrier between sense and the vaporous fringe which distracts the attention from its agonized approaches to the moment.”

Mallarmé (“Scribbled at the Theatre”):

Criticism, in its integrity, is not, doesn’t have, or doesn’t equal Poetry, to which it brings a noble complementary operation, unless it aims, directly and superbly, also at phenomena or at the universe: but in spite of that, perhaps because of its quality of primordial instinct placed at the heart of our billowing folds (a divine unease), it gives in to the attraction of a theater that offers a mere representation for those who can’t see the things themselves! of the play written every night in the folio of the sky, and mimed in the gestures of his passions by Man.

In which he is and as and is are one.
For its counterpart a kind of counterpoint
Irked the wet wallows of the water-spout.

The rain kept falling loudly in the trees
And on the ground . . .

Tournamonde is a neologism. For me it creates an image of a world in which things revolve and the word is therefore appropriate in the collocation of is and as. Curiously, this word, to which I paid considerable attention when I used it, originated, in my mind, in the word mappemonde. I then got around to tournemonde, which would be a French neologism and I then changed it arbitrarily to tournamonde. I think that the word justifies itself in the sense of conveying an immediate, even though rather vague, meaning. Mallarmé said that poetry was made of words. Yet if you found this word really offensive, I could easily change it. I can only say that I am for it.

“As and is are one.” And is it only chance machinations of the gubbinally-attuned (“. . . Is just what you say. / Have it your way . . .”) that make Hejinian, here in The Book of a Thousand Eyes sound rather Stevensesque?

When I speak it’s clear that I don’t reject
the world. Its witnesses
Coincide with this. We all enjoy illumination
and visibility. At the park
A shuddering infant watches the leaves, a child
floating on an inflated dinosaur
Slowly crosses the lake—alert, submissive,
bound. Life takes a real world.
The edge turned toward the wind is sharp, its
opposite dissolves
Into other things—only pretending to be trying
to get out of the way.

Stevens and Hejinian as coinciding witnesses. Worldly, though not wholly “of” it. That pertinacity of implacable reason, its flattish affect.


* Williams begins Spring and All thus:

If anything of moment results—so much the better. And so much the more likely will it be that no one will want to see it.
There is a constant barrier between the reader and his consciousness of immediate contact with the world. If there is an ocean it is here . . .

The opening lines of Hejinian’s The Book of a Thousand Eyes read:

I’ll write
and I myself can read
to see if what I’ve written is right.
Sleep offers an excuse
for substitution . . .