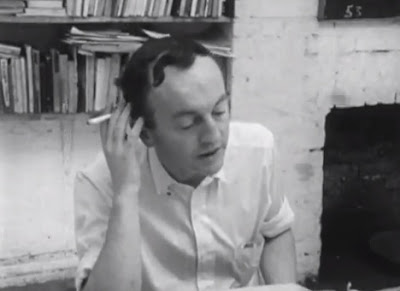 In the Cassandra Gillig-uploaded USA: Poetry footage of Frank O’Hara typing away at the Royal, mustering up a script for a film (to be read “against the film”—in an outtake printed in the Berkson and LeSueur-edited Homage to Frank O’Hara, O’Hara says: “I want it to be against the movie . . .” and Alfred Leslie agrees: “Yeah, I want the dialogue, the printed dialogue, should always be against what’s happening that we’re looking at, what we’re looking at in the scene . . .”)—in the footage, filmed 5 March 1966 (the final piece in O’Hara’s chronologically-arranged Collected Poems, the late stray “Little Elegy for Antonio Machado” is dated 27 March 1966, making O’Hara’s script, collected in the 1978 Selected Plays under the title “Act & Portrait,” a nigh final piece), something of a stunner: O’Hara’s lines “I wanted to lie down and be run over. It will come anyway . . .”*—O’Hara dying some few months later shortly after being hit by a dune buggy on Fire Island, 24 July 1966. The pertinent lines out of the Selected Plays’s “Act & Portrait” (with additions, counter to what O’Hara reads in the film, marked in italics):

We walked on and on, hating each other. The air was better in bed. Now my eyes hurt, I’m coughing and out of cigarettes. I looked at them on the corner of 23rd Street and 7th Avenue. I wanted to lie down and be run over. It will come anyway. I didn’t come, but it will. Miles did. Come. DIOS BENDIGA NUESTRA CASA. We looked at the Chelsea Hotel, it seemed to be damaged like everything else. Dios bendiga nuestra casa. Two nuns walked by looking like lady wrestlers. I thought of my childhood and my dirty underwear, my socks.

The later additions making the lines less spooky, “come” made pun undermining its earlier intent, the lines now merely a momentary fancy inserted into the character John’s trials within the trio. (Leslie’s sense of the threesome—out of the outtakes: “Miles addresses himself to Dorothea. Dorothea addresses herself to John. John is always stalking about his past. He’s talked about the Catholic church, the nuns, the priests and everything else . . .”) Other changes to “Act & Portrait” (with, at the end, O’Hara’s telephone conversation providing fodder):

It’s raining. It makes me feel sweaty like last night. I hate to feel sweaty. That’s not sex, that just amusement. Going to bed with Dorothea is like going to bed with a nun. She’s just a pal, sexually, she doesn’t feel anything about me or him, she just wants to be accommodating. We’re all generalized, like mannequins. It’s nobody’s business what people do when they’re alone. Everybody is always intruding. But it never makes any difference.
She thinks she’s some sort of cornball Salome. I think she’d like to have my head. Her and her mother. A flashing bolt. I got on last night. On what? I’m retarded. Henry Chickenhawk.
Guys in black leather jackets give me the creeps. Who doesn’t want to be Marlon?

And so forth. Later in “Act & Portrait”:

There’s something about nipples that disturbs me. Sometimes they stick out, sometimes they sink in. It’s like guns. Sometimes you have the safety on, sometimes you have it off. Keep your powder dry. I wanted to go to chapel and hear my son sing some sort of cantata, but I couldn’t pull myself together. At least he’s going to a good school. But he’ll be disappointed. He may as well start early.
Religion is very Gothic. I’m agin it. Fergit it. I get nervous enough around real living palpable pulsating smelling persons, without something coming over the horizon at me. And yet I do look up and I do see the sky. What is it? Why is it blue? Why is that truck driver driving a truck?

Two selections out of the outtakes film (“Frank O’Hara: Second Edition,” made by the American Poetry Archive Film Unit of the Poetry Center, San Francisco State University). O’Hara, concerning boredom and conscientiousness (he’s just reported Dylan Thomas’s responding to “Jimmy Merrill’s play” at some “funny little theater”: “. . . afterwards, when we went to the bar, Tennessee introduced me to Dylan Thomas and he said: “Those plays are shit.” (Laughter.) And he wouldn’t come back after intermission.”):

That’s another thing that happened, that there should be more of a certain kind of thing. When John Cage had his first concerts, or not his first, but you know, there was a limited audience, and it was bored and so forth, a lot of it. But everybody went because they had to know about it, whether they were bored or they weren’t bored, they felt like it was important to know what John Cage thought, or did, or sounded like, which seems to be declining, in a certain sense. I mean, you said if everybody goes to “Marat / Sade” and everybody says the text is lousy, but it’s interesting to see the people directed on the stage, and the way they’re directed, which is nothing, that is, there’s nothing to that kind of thing. If there is no content, let’s say, and I’m not saying there isn’t any content, but I mean if the audience doesn’t get any content, then what difference does it make how much excitement you get by moving people around a stage and showing a bare ass when the guy gets out of the tub?

And, talking with USA: Poetry director Richard O. Moore about the necessity for a “total absorption in international milieu” (touting a sense of literary civility—or duty—nearly unheard of in the present “era”):

Moore:   I’ve heard a lot from John [Ashbery] and Kenneth [Koch] about French poetry, what’s your relation to that?

O’Hara:   Oh, French poetry is sort of like one’s mother, I guess. As a matter of fact, much better (laughter).

Moore:   Have you ever lived in France?

O’Hara:   No. I’ve just visited France. No, it’s all literary . . . I did, that is, I don’t think one has to eat croissants in order to understand French poetry, and also just as in America, the real ideas, at a certain point, except for Stevens and William Carlos Williams and Pound, of course, earlier, came from total absorption in international milieu. It’s impossible to be a modern person and have an idea of what your life is like unless you know French poetry, as well as certain Italian poets. I don’t think Quasimodo is very necessary but certainly Montale is and Pasolini and of course above all Ungaretti in Italy, just as you shouldn’t think you’re good if you don’t know the poems of Hölderlin or Rilke. You just can’t get by. It’s also as stupid as thinking Whitman isn’t a very great poet in the whole history of poetry. It’s impossible. (Technicians mumble.)

O’Hara:   Who did I leave out (laughter)? I forgot Shakespeare. Well, there are so many; Apollinaire is the one I would really . . .
This poem is called “For the Chinese New Year & For Bill Berkson.” It has an epigraph from D. H. Lawrence, who is also necessary, I think, along with French poetry . . .

* Other curious points de repère: “Watch out for the Mack truck. It’s got your number on it.” (“Two Shepherds, A Novel”) and “Shall I one day be the witch who saves men’s lives by throwing self beneath a rambling truck?” (“Jane at Twelve”).